Thunder Bay Island Light, located on Thunder Bay Island's southeast tip, is one of the oldest operating lighthouses in Michigan. The third operating U.S. lighthouse in Lake Huron was built here in 1831, but it disintegrated almost at once and was rebuilt in 1832 of local limestone. [1] This 40-foot (12 m) 1830s light tower was raised 10 feet (3.0 m)) to a height of 50 feet (15 m) in 1857, and sheathed with brick. A fourth order Fresnel lens was installed. [1] This 1857 light tower is the current Thunder Bay Island Light, although the tower has been further altered and is currently 63 feet (19 m) high. [3]

The lighthouse was staffed during the seasons of Great Lakes navigation from 1832 until the staff was replaced by automation in 1983, more than 150 years later.

Under TBILPS's guidance, the light has been the object of an intense rescue effort. They have been the subject of a feature article in Lighthouse Digest. [4]

In 2004, Stephen B. Tongue and TBILPS published a book on Thunder Bay Island's history and heritage, with proceeds assigned to the historic preservation of the island. [5] 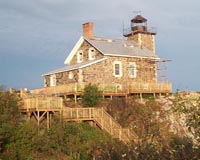 Because it was positioned near the busy shipping lanes of the mid-19th century, a lighthouse was built on Granite Island in 1868 by the U.S. Lighthouse Board and commissioned in 1869. 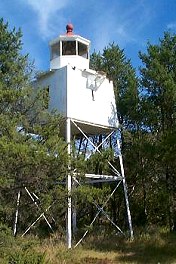 The Chequamegon Point Lighthouse is a lighthouse located on Long Island, one of the Apostle Islands, in Lake Superior in Ashland County, Wisconsin, near the city of Bayfield. 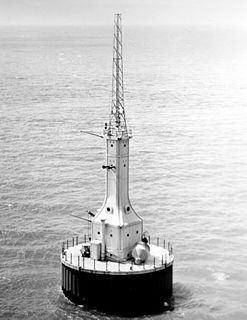 Gravelly Shoals Light is an automated lighthouse that is an active aid to navigation on the shallow shoals extending southeast from Point Lookout on the western side of Saginaw Bay. The light is situated about 2.7 miles (4.3 km) offshore and was built to help guide boats through the deeper water between the southeast end of Gravelly Shoals and Charity Island. Architecturally this is considered to be Art Deco style.

Thunder Bay Island is a 215-acre (87 ha) island in Lake Huron. The island is one of eight constituent islands of the Michigan Islands National Wildlife Refuge. The island is part of Alpena Township in Alpena County. It marks the entrance to Thunder Bay, the harbor of Alpena, Michigan and the location of the Thunder Bay National Marine Sanctuary.

The Cheboygan Crib Light is a light that marks the west pier head of the mouth of the Cheboygan River into Lake Huron. The pier head, in the center of the municipality of Cheboygan, is located at the north or lake end of Huron Street, and is one of the centerpieces of Cheboygan's Gordon Turner Park.

Eagle Harbor Light is an operational lighthouse at Eagle Harbor, in Keweenaw County in the state of Michigan. It sits on the rocky entrance to Eagle Harbor and is one of several light stations that guide mariners on Lake Superior across the northern edge of the Keweenaw Peninsula. The original lighthouse, built in 1851, was replaced in 1871 by the present red brick structure, which is a Michigan State Historic Site and listed on the National Register of Historic Places.

Mackinaw Point marks the junction of Lake Michigan and Lake Huron. Founded in 1889, the Old Mackinac Point Light Station was in operation from 1890 until 1957. 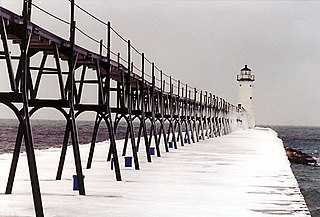 The Manistee Pierhead lights are a pair of active aids to navigation located on the north and south pier in the harbor of Manistee, Michigan, "Lake Michigan’s Victorian Port City."

The Menominee North Pier lighthouse is located in the harbor of Menominee, Michigan. The station was first lit in 1877. The current structure and its still operational light was lit in 1927, and automated in 1972. It is also sometimes called the "Menominee (Marinette) North Pierhead Light".

The Muskegon South Pierhead Light or Muskegon Pier Light is a lighthouse located on the channel in the harbor of Muskegon, Michigan.

The Harbor Beach Lighthouse is a "sparkplug lighthouse" located at the end of the north breakwall entrance to the harbor of refuge on Lake Huron. The breakwall and light were created by the United States Army Corps of Engineers to protect the harbor of Harbor Beach, Michigan, which is the largest man-made freshwater harbor in the world. Harbor Beach is located on the eastern edge of the Thumb of Huron County, in the state of Michigan.

Pointe aux Barques Lighthouse is an active lighthouse located in Huron County in the U.S. state of Michigan. It is located along the shores of Lake Huron on the northeastern tip of the Thumb. Originally constructed in 1848, it is one of the oldest active lighthouses in the state. The name is translated as "point of little boats" from the French language, which refers to the shallow coastline that poses a threat to larger boats.

The Marquette Harbor Light is located on Lake Superior in Marquette, Michigan, a part of the Upper Peninsula. It is an active aid to navigation. 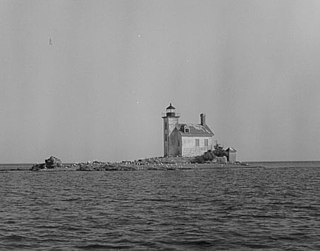 The Gull Rock Light Station is an active lighthouse located on Gull Rock, just west of Manitou Island, off the tip of Michigan's Keweenaw Peninsula in Lake Superior. The light was listed on the National Register of Historic Places in 1984, even as its condition deteriorated, resulting in its placement on the Lighthouse Digest Doomsday List. 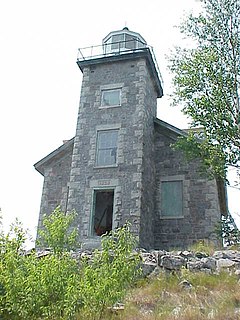 Huron Island Light is a lighthouse on Lake Superior near Big Bay, Michigan. It was listed on the National Register of Historic Places as Huron Islands Lighthouse in 1975. It is on one of the Huron Islands Wilderness.

The Middle Island Light is a lighthouse located on Middle Island in Lake Huron, about 10 miles (16 km) north of Alpena, Michigan. It was listed on the National Register of Historic Places in 2006.