Thunder Rumble (1989 in New York – January 6, 2015) was an American Thoroughbred racehorse that The Blood-Horse called a "sensation at Saratoga" race course for his performances there in 1992. [1]

Bred and raced by Konrad Widmer and his daughter Ursula under their Braeburn Farm banner, Thunder Rumble was trained by Richard O'Connell. As a three-year-old in 1992, Thunder Rumble missed the U.S. Triple Crown series due to a virus. [2] However, the colt had an outstanding year. He won the Count Fleet Stakes at Aqueduct Racetrack and at Saratoga captured the Montauk Handicap, the Grade II Jim Dandy Stakes and then became the first New York-bred horse in 125 years to win the Grade I Travers Stakes. [3] Laid up for almost six months from an injury following a seventh-place finish in the 1992 Breeders' Cup Classic, Thunder Rumble ran without success in four races in California under trainer Chris Speckert. Returned to New York and trainer Richard O'Connell, on July 20, 1994 he won a seven-furlong allowance race by three and a half lengths, then won the August 6 Saratoga Cup by four lengths, beating the likes of Belmont Stakes winner Colonial Affair and Pistols and Roses. [4]

The Count Fleet Stakes is an American Thoroughbred horse race run at Aqueduct Racetrack, located in Jamaica, New York, at the beginning of January each year. It is the first stakes race of the year run in New York City for three-year-olds.

Aqueduct Racetrack is a Thoroughbred horse-racing facility and racino in the South Ozone Park and Jamaica neighborhoods of Queens, New York City. Its racing meets are usually from late October/early November through April. The racetrack is located adjacent to a casino called Resorts World New York City.

Retired to stud duty for the 1995 season, Thunder Rumble sired a few good runners, including stakes winner, Frisky Thunder. Pensioned at Keane Stud, in Armenia, New York in 2006, in 2009 he was sent to Joann and Mark Pepper's farm in Greenfield Center, New York, who operate Old Friends at Cabin Creek: The Bobby Frankel Division. The Thoroughbred retirement facility is a satellite operation of Old Friends Equine in Georgetown, Kentucky. [5] 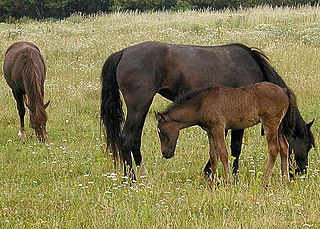 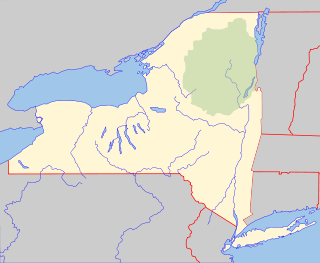 Greenfield is a town in Saratoga County, New York, United States. The population was 7,362 at the 2000 census. The town is named after Greenfield, New Hampshire. It is located northwest of Saratoga Springs, which it borders, and students living in Greenfield attend schools of the Saratoga Springs City School District.

Old Friends is a nonprofit 501(c)(3) equine retirement facility in Georgetown, Kentucky, accredited by the Thoroughbred Aftercare Alliance (TAA). The organization started with one leased paddock and two horses, but now owns 136 acres, Dreamchase Farm, with additional leased pasturage. It is the only Thoroughbred retirement facility in the United States that accepts stallions on a regular basis. Old Friends is currently home to over 150 retired Thoroughbred athletes.

Part of the New York Stallion Series, the Thunder Rumble Stakes at Aqueduct Racetrack is named in his honor. [6]

The New York Stallion Series was created by the New York Thoroughbred Breeders', Inc. The races are run at Aqueduct Racetrack and/or Belmont Park and feature the progeny of stallions standing in the state of New York. 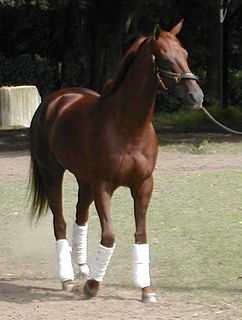 Saratoga Race Course is a thoroughbred horse racing track located on Union Avenue in Saratoga Springs, New York, United States, with a capacity of 50,000. Opened in 1863, it is often considered to be the oldest major sporting venue of any kind in the country, but is actually the fourth oldest racetrack in the US. 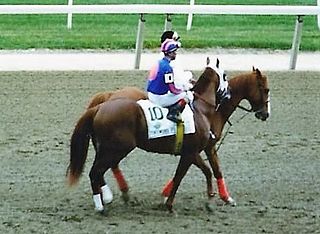 Thunder Gulch was a Champion American Thoroughbred racehorse best known for his wins in the Kentucky Derby and the Belmont Stakes in 1995, which earned him the title of U.S. Champion 3-Yr-Old Colt. 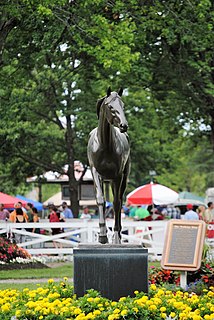 Sea Hero is an American-bred Thoroughbred racehorse best known for winning the 1993 Kentucky Derby and Travers Stakes. Since 2011, Sea Hero is the oldest living winner of the Kentucky Derby. 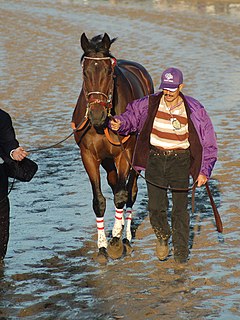 Runaway Groom (1979–2007) was a Canadian Hall of Fame Thoroughbred racehorse.

Alydeed is a Canadian Thoroughbred racehorse. Bred by Anderson Farms of St. Thomas, Ontario, he was out of the unraced mare Bialy, a daughter of U.S. Racing Hall of Fame inductee, Alydar. A grandson of British Triple Crown winner Nijinsky, he was sired by Shadeed, the 1985 British Champion Miler and winner of the British Classic, the 2,000 Guineas.

Behrens was an American Thoroughbred racehorse. Out of the mare Hot Novel, he was sired by the 1981 Kentucky Derby and Preakness Stakes winner, Pleasant Colony.

Campfire (1914–1932) was an American Thoroughbred racehorse.

Smarten was an American Thoroughbred racehorse and successful sire. Bred in Maryland by Jim and Eleanor Ryan and raced under their Ryehill Farm banner, he had a record of 27: 11-8-2 with career earnings of $716,426.

Eddington is a millionaire American Thoroughbred racehorse and successful sire bred in Kentucky by Carl Rosen and Associates and raced under the Willmott Stables banner. He finished racing with a record of 6-3-6 in 17 starts and career earnings of $1,216,760. Eddington was best known for his wins in the Grade I Pimlico Special and the Grade II Gulfstream Park Handicap as well as his in-the-money showing in the Grade I Preakness Stakes. As a yearling, he was sent to Ocala, Florida, to the master horsemen Art Fisher.

Ruler on Ice is a Thoroughbred racehorse that won the 2011 Belmont Stakes. He was bred and foaled in Kentucky by Brandywine Farm in partnership with Liberation Farm on. He is a chestnut gelding sired by Hill 'n' Dale Farms' Roman Ruler out of the Saratoga Six-bred mare, Champagne Glow. The colt was consigned as lot 988 at the 2009 Keeneland September yearling auction, where he was purchased by George and Lori Hall for $100,000. Ruler on Ice only won one minor race after winning the Belmont and was retired from racing in July 2014. He currently lives in Versailles, Kentucky at the farm of his owners.