Thunderbike was founded in 1985, as a Suzuki dealer named Motorradschuppen (eng.: motorcycle shed) in the small town of Hamminkeln in western Germany. [1] Between 1987 and 2001 the Thunderbike Team was successful at the German racing series Deutsche Langstreckenmeisterschaft and produced many customized sports bikes.

In 2003, Thunderbike began to customize Harley-Davidson motorcycles and started to create self-produced frames, custom-wheels and other parts. They reached the 2nd place at the AMD World Championship in 2006 and became one of the most successful European customizers.

A custom motorcycle is a motorcycle with stylistic and/or structural changes to the 'standard' mass-produced machine offered by major manufacturers. Custom motorcycles might be unique, or built in limited quantities. While individual motorcyclists have altered the appearance of their machines since the very first days of motorcycling, the first individualized motorcycles specifically labeled 'Custom' appeared in the late 1950s, around the same time as the term was applied to custom cars. In the 1960s, custom artisans like Arlen Ness and Ben Hardy created new styles of custom bikes, the chopper. In the 1990s and early 2000s, very expensive customs such as those built by Orange County Choppers, Jesse James's West Coast Choppers, Roger Goldammer became fashionable status symbols. There are also companies that are bringing back pin striping, such as Kenny Howard and Dean Jeffries from the 1950s, with a continued effort to keep pin striping alive. The choppers of the 1960s and 1970s fit into this category.

A softail is a motorcycle with its rear suspension springs or shock absorbers located out of direct view, so as to look like a hard-tail motorcycle. 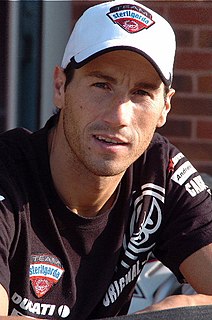 Rubén Xaus is a retired motorcycle road racer. During his career he competed in both the Superbike World Championship and the MotoGP. He is nicknamed 'Spider-Man', as his lanky frame leads him to hang over the bike in an unusual way. 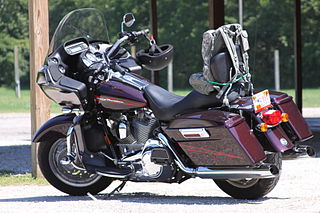 A touring motorcycle is a type of motorcycle designed for touring. Although almost any motorcycle can be used for this purpose, manufacturers have developed specific models designed to address the particular needs of these riders. Touring motorcycles commonly have large displacement fairings and windshields that offer a high degree of weather and wind protection, large-capacity fuel tanks for long ranges between fill-ups, engines with a great deal of low-end horsepower, and a more relaxed, upright seating position than sport bikes. 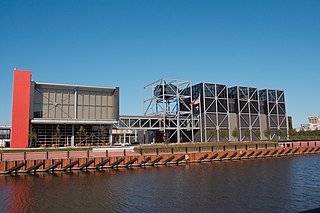 Arlen Darryl Ness was an American motorcycle designer and entrepreneur best known for his custom motorcycles. Ness received acclaim for his designs, most of which are noted for their unique body style and paintwork.

The Harley-Davidson Super Glide was a motorcycle made by the Harley-Davidson. Reputed to be the first factory custom motorcycle, it originated Harley-Davidson's FX series of motorcycles by mating Sportster components, most notably the front end, with the chassis of their larger big twin motorcycles. Super Glide models from 1991 to 2017 were based on the Dyna Glide chassis which has a wider variety of front ends and trim levels, and for a time filled the intermediate niche between the smallest and largest Harley-Davidson models; the Dyna platform has since been discontinued for the 2018 model year in favor of the new Softail frame, with some models from the Dyna nameplate being carried over to the Softail line.

A bobber, originally called a 'bob-job' from the 1930s through 1990s, is a style of custom motorcycle. The typical construction includes stripping excess bodywork from a motorcycle; removing the front fender, and shortening the rear fender, which is "bobbed", and all superfluous parts removed to reduce weight.

Roger Goldammer is a Canadian motorcycle builder most known for winning the World championship of bike building three times. 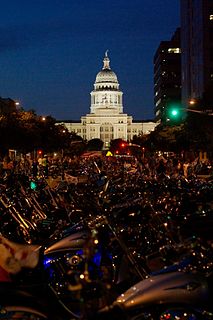 The Republic of Texas Biker Rally is the largest motorcycle rally in Texas and the largest turnstile motorcycle rally in the United States. Similar events in Sturgis, South Dakota, and Daytona Beach, Florida, draw more attendees, but they are not ticketed events. A simple majority of attendees arrive on Harley-Davidson motorcycles, but the rally is open to everyone and all brands of bikes. Many attendees arrive in motor homes and stay on the premises. 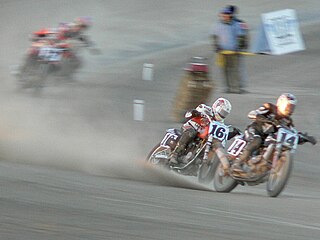 The Buffalo Chip Campground is an event venue in Meade County, South Dakota, USA. In 2016, an attempt was made to incorporate the City of Buffalo Chip. The legal status of the city was disputed, with a circuit court ruling against incorporation, but the South Dakota Supreme Court decided in 2018 that Buffalo Chip was indeed a city.

Iron Custom Motorcycles (ICM) — Ukrainian custom motorcycle workshop. The company was founded in Kharkiv in 2010 by Yaroslav Lutytskyi. ICM is the first Ukrainian custom-workshop, which introduced its country at the World and European championships on customizing. In 2016, ICM has become a winner of the AMD World Championship of Custom Bike Building in café racer class, with “Beckman” project. In 2017, the ICM team set a world speed record in the class 350APS-VG with the project "Inspirium".

Harley-Davidson: Race Across America is a racing game developed by Canopy Games and G2M Games, and published by WizardWorks Software in 1999. The game centers on racing Harley-Davidson motorcycles across different locales in the United States, with the ultimate goal being to reach the Sturgis Motorcycle Rally.

ShifCustom is a custom motorcycle workshop from Minsk, Belarus. The core business of the workshop is in building motorcycles tailored to individual requirements. Yuri Shif founded the workshop in 2003.