Thunderbolt (Chinese :霹靂火) (Piklik Foh) is a 1995 Hong Kong action sports film, starring Jackie Chan and directed by Gordon Chan. The action directors were Jackie Chan and Sammo Hung, and the action scenes were performed by the Jackie Chan Stunt Team. [2] In early North American releases, the film was known as Dead Heat.

Thunderbolt is set around the world of auto racing. The film is multilingual; characters speak Cantonese, English and Japanese interchangeably.

Chan Foh To is a junkyard mechanic and a part-time race car driver who helps the Hong Kong Police Force in their crackdown on illegal street racing in the country. One night, while helping news reporter Amy Yip and Mr. Lam after their Mitsubishi FTO runs out of gasoline, Chan commandeers the car with Amy inside to chase after a speeding black Nissan Skyline GT-R R32 driven by the dangerous criminal driver Warner "Cougar" Kaugman. In the high speed car chase's climax, Chan traps Cougar in a police roadblock and has him apprehended. However, due to a lack of evidence and a warrant for arrest, Cougar is immediately released from police custody. Chan continues to be harassed by Amy, who wants to do a cover story of him.

After Chan fends off against Cougar's thugs at his junkyard, Cougar is once again arrested when Chan provides a false testimony under the guidance of Interpol agent Steve Cannon. However, Cougar's thugs raid the police station and spring him out of jail. The thugs kill all but Cannon, who kills Cougar's girlfriend before they get away. Cougar then destroys the junkyard and injures Chan's father Chun Tung before taking his younger sisters Dai Mui and Sai Mui hostage to force Chan to race him in Japan.

Chan and his racing team build him a yellow Mitsubishi Lancer Evolution III race car and prepare for his upcoming race, receiving permission from the police to drive it on the expressway. They arrive in Japan, where Chan storms into and destroys a pachinko hall owned by a yakuza gang before Cougar allows Dai Mui to reunite with her brother. Chan makes the starting grid at Sendai Hi-Land Raceway, but his car is destroyed in a collision. Feeling sympathy for Chan, Miss Kenya, the daughter of a Mitsubishi Motors executive, supplies him with two brand-new white Mitsubishi GTO race cars and a supply of Advan tires for the race.

Chan starts at the back of the field, but muscles his way toward the front, despite a 30-second pit penalty and other distractions caused by Amy. He approaches and battles Cougar for the lead. During the final lap, both cars slide off the track into the gravel pit, facing each other as they struggle to get back on the road. Cougar gets out first, but Chan floors it in reverse before both cars cross the line in a photo finish. Chan wins the race during the spin back forward when his front end touches the finish line first. Cougar attempts to flee from the police, but Chan chases him around the circuit before sending him crashing violently off the track. Chan pulls Cougar out of the burning wreckage for the police to arrest him, and Cannon reveals that he and his team rescued Sai Mui. He then reconciles with Amy and kisses her.

Because Jackie had injured his leg during the shooting of Rumble in the Bronx , he was unable to perform some of the stunts. During the fight-scene at the pachinko hall in Japan, he was forced to use a stunt double for the wide-angle shots.

In Hong Kong, Thunderbolt grossed HK$46 million during its theatrical run. [4] This was equivalent to US$6 million. [3] [1] It premiered during a slump in Hong Kong cinema and, according to Variety , it and Rumble in the Bronx were "more than one-sixth of the combined gross of Hong Kong movies through the end of August." [5]

Chan Kong-sang, known professionally as Jackie Chan, is a Hong Kong martial artist, actor, stuntman, film director, action choreographer, screenwriter, producer, and singer. He is known in the cinematic world for his slapstick acrobatic fighting style, comic timing, use of improvised weapons, and innovative stunts, which he typically performs himself. He has trained in Wushu or Kung Fu and Hapkido, and has been acting since the 1960s, appearing in over 150 films.

Rumble in the Bronx is a 1995 Hong Kong martial arts film starring Jackie Chan, Anita Mui and Françoise Yip. It was directed by Stanley Tong, with action choreographed by Chan and Tong. Released in Hong Kong in 1995, Rumble in the Bronx had a successful worldwide theater run, and brought Chan into the North American mainstream. The film is set in the Bronx area of New York City, but was filmed in and around Vancouver, Canada. The film grossed US$76 million worldwide, against a $7.5 million budget, making it one of the most profitable films at the time. 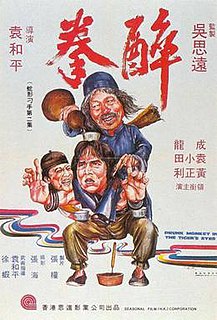 Drunken Master is a 1978 Hong Kong action comedy martial arts film directed by Yuen Woo-ping, and starring Jackie Chan, Yuen Siu-tien, and Hwang Jang-lee. The film was a success at the Hong Kong box office, earning two and a half times the amount of Yuen's and Chan's previous film, Snake in the Eagle's Shadow, which was also considered a successful film.

Cannonball Run II is a 1984 American–Hong Kong comedy film starring Burt Reynolds and an all-star cast, released by Warner Bros. and Golden Harvest. Like the original Cannonball Run, it is a set around an illegal cross-country race. 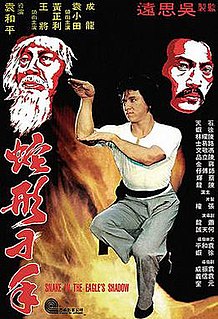 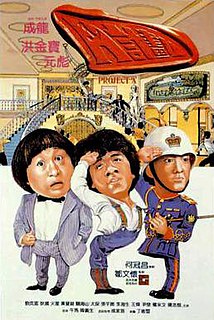 Project A is a 1983 Hong Kong martial arts action comedy film starring and directed by Jackie Chan, who is also writer along with Edward Tang, and is also the film producer along side Leonard Ho and Raymond Chow. The film co-stars Sammo Hung and Yuen Biao. The film was released on December 22, 1983. 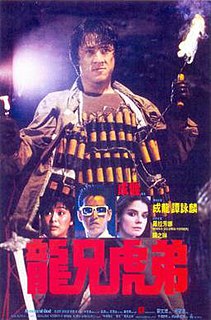 Armour of God is a 1986 Hong Kong action-comedy film written and directed by Jackie Chan, who also starred in the film. The film co-stars Alan Tam, Lola Forner and Rosamund Kwan.

Police Story is a 1985 Hong Kong action–crime film written and directed by Jackie Chan, who also stars in the lead role. It is the first of the Police Story series featuring Chan as Hong Kong police detective "Kevin" Chan Ka-Kui, starring alongside Brigitte Lin and Maggie Cheung. Chan began work on the film after a disappointing experience working with the director James Glickenhaus on The Protector, which was intended to be his entry into the American film market.

Twin Dragons is a 1992 Hong Kong action comedy film directed by Ringo Lam and Tsui Hark, and starring Jackie Chan in a double role as twin brothers separated at birth.

The Big Brawl, also known as Battle Creek Brawl, is a 1980 martial arts film which marked Jackie Chan's first attempt to break into the American movie market. A joint Hong Kong and American production, it was directed by Robert Clouse and featured much of the crew from Enter the Dragon.

The Young Master is a 1980 Hong Kong martial arts film starring and directed by Jackie Chan, who also writer with Edward Tang, Lau Tin-chi and Tung Lu. The film co-stars Yuen Biao, Fung Fung and Shih Kien. The film was released on 9 February 1980. 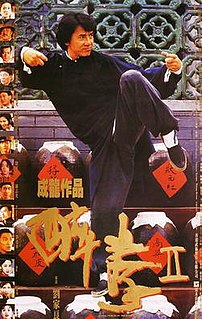 Drunken Master II is a 1994 Hong Kong action-comedy kung fu film directed by Lau Kar-leung and Jackie Chan, who stars as Chinese martial arts master and folk hero of Cantonese ethnicity, Wong Fei-hung. It was Chan's first traditional style martial arts film since The Young Master (1980) and Dragon Lord (1982). The film was released in North America as The Legend of Drunken Master in 2000.

Dragons Forever is a 1988 Hong Kong action comedy film directed by Sammo Hung and Corey Yuen. It stars Sammo Hung, Jackie Chan and Yuen Biao, with Deannie Yip, Pauline Yeung, and Crystal Kwok. It is the last film in which Hung, Chan and Biao all appeared in together, as Chan subsequently focused on his solo film career. 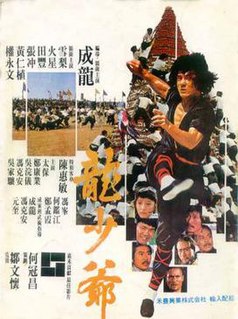 Dragon Lord is a 1982 Hong Kong martial arts action-comedy film directed by and starring Jackie Chan, who also wrote the film with Edward Tang and Barry Wong. It was originally supposed to be a sequel to The Young Master and even had the name Young Master in Love until it was changed to Dragon Lord. The film experimented with various elaborate stunt action sequences in a period setting, serving as a transition between Chan's earlier comedy kung fu comedy period films and his later stunt-oriented modern action films.

Project A Part II is a 1987 Hong Kong action film written and directed by Jackie Chan, who also starred in the lead role. It is the sequel to the 1983 film Project A. Jackie Chan plays Sergeant Dragon Ma once again, Sammo Hung and Yuen Biao, stars from the original film, are absent. The film was released in Hong Kong on 19 August 1987.

City Hunter is a 1993 Hong Kong action comedy film written and directed by Wong Jing, starring Jackie Chan, Joey Wong, Kumiko Goto, Chingmy Yau, and Richard Norton. The film is based on the Japanese manga of the same name. The film was released in Hong Kong on 14 January 1993 along with Stephen Chow's Fight Back to School III. 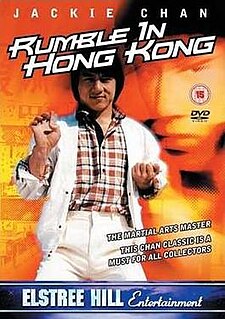 Police Woman, released in the United States as Rumble in Hong Kong, is a 1973 Hong Kong action crime film written, produced and directed by Hdeng Tsu, who also co-stars in the film. The film stars Lin Chiu, Charlie Chin and Jackie Chan. The film is also known as Young Tiger. 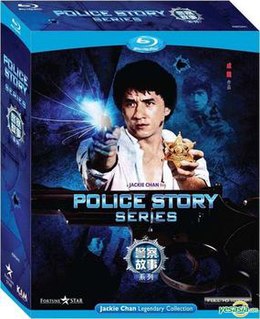