Thunderhorse or Thunder horse may refer to: 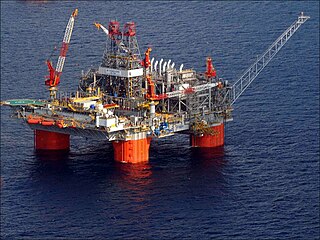 Thunder Horse PDQ is a BP plc and ExxonMobil joint venture semi-submersible oil platform on location over the Mississippi Canyon Thunder Horse oil field, in deepwater Gulf of Mexico, 150 miles (240 km) southeast of New Orleans, moored in waters of 1,840 metres (6,040 ft). The "PDQ" identifies the platform as being a Production and oil Drilling facility with crew Quarters. 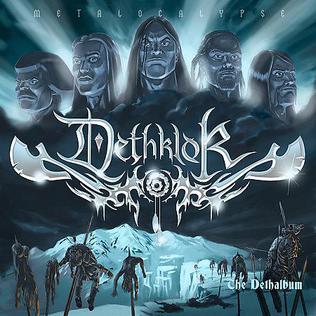 An oil platform, offshore platform, or offshore drilling rig is a large structure with facilities for well drilling to explore, extract, store, and process petroleum and natural gas which lies in rock formations beneath the seabed. In many cases, the platform contains facilities to house the workforce as well.

Port Fourchon is Louisiana’s southernmost port, located on the southern tip of Lafourche Parish, on the Gulf of Mexico. It is a seaport, with significant petroleum industry traffic from offshore Gulf oil platforms and drilling rigs as well as the Louisiana Offshore Oil Port pipeline. Fourchon's primary service markets are domestic deepwater oil and gas exploration, drilling, and production in the Gulf. Port Fourchon currently services over 90% of the Gulf of Mexico's deepwater oil production. There are over 600 oil platforms within a 40-mile radius of Port Fourchon. This area furnishes 16 to 18 percent of the US oil supply.

The Bay of Campeche, or Campeche Sound, is a bight in the southern area of the Gulf of Mexico. It is surrounded on three sides by the Mexican states of Campeche, Tabasco and Veracruz. The area of the bay is 6,000 square miles (16,000 km2) and maximum depth of the bay is approximately 180 feet (55 m). It was named by Francisco Hernández de Córdoba and Antón de Alaminos during their expedition in 1517.

Apache Corporation is is a company engaged in hydrocarbon exploration. It is organized in Delaware and headquartered in Houston. The company is ranked 438th on the Fortune 500.

Isthmus-34 Light is a sour crude oil produced in Mexico mainly in the Campeche zone, in the Gulf of Mexico along with the extraction centers in Chiapas, Tabasco, and Veracruz. The name derives from the nearby Isthmus of Tehuantepec and the oil is a component of the OPEC Reference Basket. It has the following characteristics:

The Masked Rider is the primary mascot of Texas Tech University. It is the oldest of the university's mascots still in existence today. Originally called "Ghost Rider", it was an unofficial mascot appearing in a few games in 1936 and then became the official mascot with the 1954 Gator Bowl. The Masked Rider has led the team onto the field at nearly every football game since. It is the nation's first school mascot to feature a live horse at a football game, ahead of Florida State's Chief Osceola and Renegade and 25 years before USC's Traveler and all other such mascots in existence today.

This is a list of oil and gas fields operated by BP.

As of 2007, the proven oil reserves in Mexico were 12.4 billion barrels. The US Energy Information Administration estimated Mexican proved reserves to be 10.3 billion barrels as of 2013.

The Mississippi Canyon is an undersea canyon, part of the Mississippi Submarine Valley in the North-central Gulf of Mexico, south of Louisiana. According to the U.S. Geological Survey GLORIA Mapping Program, it is the dominant feature of the north-central Gulf of Mexico. According to GCAGS Transactions, it has an average width of 8 kilometres (5.0 mi), and a length of 120 kilometres (75 mi). The US Minerals Management Service (MMS) applies the name Mississippi Canyon to numbered federal oil and gas lease blocks over a large offshore area centered on, but mostly outside, the submarine canyon. 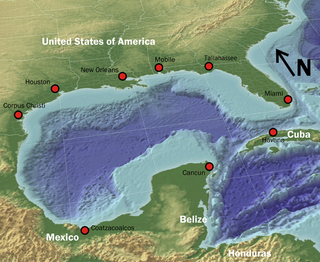 The Gulf of Mexico is an ocean basin and a marginal sea of the Atlantic Ocean, largely surrounded by the North American continent. It is bounded on the northeast, north and northwest by the Gulf Coast of the United States, on the southwest and south by Mexico, and on the southeast by Cuba. The U.S. states of Texas, Louisiana, Mississippi, Alabama, and Florida border the Gulf on the north, which are often referred to as the "Third Coast", in comparison with the U.S. Atlantic and Pacific coasts.

Offshore oil and gas in the United States provides a large portion of the nation’s oil and gas supply. Large oil and gas reservoirs are found under the sea offshore from Louisiana, Texas, California, and Alaska. Environmental concerns have prevented or restricted offshore drilling in some areas, and the issue has been hotly debated at the local and national levels.

The Tiber Oil Field is a deepwater offshore oil field located in the Keathley Canyon block 102 of the United States sector of the Gulf of Mexico. The deepwater field was discovered in September 2009 and it is operated by BP. Described as a "giant" find, it is estimated to contain 4 to 6 billion barrels of oil in place. Although BP states it is too early to be sure of the size – a "huge" field is usually considered to contain 250 million barrels. It required the drilling of a 10,685 m (35,056 ft) deep well under 1,260 m (4,130 ft) of water, making it one of the deepest wells ever drilled at the time of discovery. 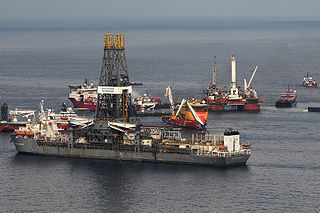 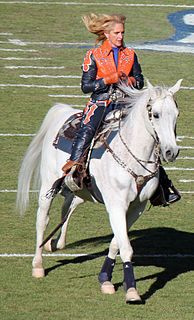 Thunder is the stage name for the horse who is the official live animal mascot for the Denver Broncos football team. Three purebred Arabians have held this role since 1993, all gray horses whose coats lightened with age until they turned completely white. Sharon Magness-Blake has owned all three horses, and Ann Judge has been their rider since 1998 and trainer since 1999. As of 2016, Thunder has appeared in four Super Bowls with the team since 1998. The original Thunder performed in Super Bowl XXXII and Super Bowl XXXIII and Thunder III appeared in Super Bowl XLVIII and Super Bowl 50. Thunder III also made appearances in Times Square and on television morning news shows in New York City as part of the pre-game promotion for Super Bowl XLVIII. He routinely appears in parades, makes hospital and school visits, and attends various other public functions. He has been flown on airplanes, ridden in elevators, and appeared indoors at press conferences and banquets.