Thunderlord is a fictional DC Comics superhero, a Buddhist monk who has vocal manipulation powers.

Liang Xih-k'ai, Thunderlord's real name, helps the Black Canary dismantle a bomb on the island of Taiwan. [1] Later on, he assists the brothers Thunder and Lightning in Vietnam during the Crisis on Infinite Earths . Thunderlord joins the other Global Guardians as brainwashed pawns of the Queen Bee. [2] The brainwashing efforts are long and complex. As with most of the Guardians he assists the Justice League Europe in battling a robot threat. It takes a trip into the sewers before the group could destroy it. Unknown to the heroes, the robot was under the Queen's control and she did not care if it had actually killed Thunderlord or anyone else in particular, it was a public relations maneuver.

As with the rest of her brainwashed victims, Thunderlord remains loyal to the Queen Bee until her murder by Sumaan Harjavti. At the same time, several recently fired members of the Justice League, Blue Beetle, Captain Atom, Elongated Man and the Crimson Fox had violated international law to investigate Bialya. They suspected Bialya was behind their firings and other manipulations of the League (they were right). The group confronts the Guardians and in the crossfire, Little Mermaid is slain by a blast from Jack O'Lantern. Thunderlord and the rest of the Guardians pursue the League through the Queen's scientific facilities. The brainwashing center is discovered.

Sumaan detonates the entire complex, killing many innocent people above and some of the scientists below. Ice saves as many lives as she can with an ice shield. She fails to save Jack O'Lantern but it turns out he was an impostor whom nobody knew.

Thunderlord, the Guardians and the Justice League team up to defeat the mind-controlling villain Sonar. [3]

The heroes involved stay to help the injured then go their separate ways. Thunderlord gains a job doing celebrity impersonations. Fain Y'onia, an ancient enemy of Doctor Mist, begins attacking the group one by one. Godiva, Impala and the Olympian are all injured. Bushmaster dies during his fight with Fain.

The surviving Guardians gather again, ambushing Fain in the Arizona desert when he tries to kill Owlwoman. Fain's energy blasts pierce Thunderlord, killing him. After Fain's defeat, a statue is built to honor Thunderlord, placed alongside statues of other fallen Guardians. [4]

Thunderlord makes a cameo along with many of his Guardian allies in "The OMAC Project". In that storyline, multiple heroes race to destroy a sentient satellite that detests all powered beings. [5]

Jade is a fictional superhero in the DC Comics Universe. She first appeared in All-Star Squadron #25 in September 1983. She is the daughter of Alan Scott and Rose Canton and the twin sister of Obsidian. 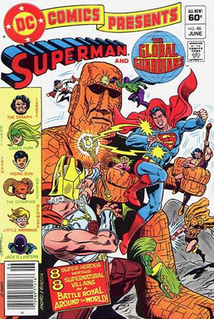 The Global Guardians is a team of fictional DC Comics superheroes whose members hail from countries around the world. The concept originated in the Super Friends Saturday morning cartoon, in which several heroes were added to the Justice League to give it more ethnic diversity. 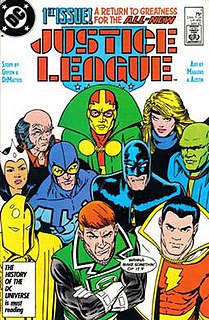 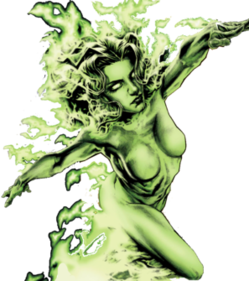 Fire is a fictional superheroine from the DC Comics universe.

Henry "Hank" Henshaw is a fictional supervillain featured in the DC Comics universe, who normally goes by the name Cyborg Superman. While originally featured primarily as an enemy of Superman, he has in recent years also been an enemy of the Green Lantern Corps.

Lucas "Snapper" Carr is a fictional character appearing in American comic books published by DC Comics. The character was created by Gardner Fox (writer) and Mike Sekowsky (penciller), and made his first appearance in The Brave and the Bold in February 1960. From 1960 to 1969, Snapper Carr appeared as a supporting character to the Justice League of America, a superhero team. The character occasionally appeared in comics featuring the Justice League from 1969 to 1989, when the Invasion! limited-series comic book gave him superpowers. 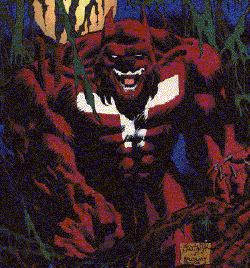 Tasmanian Devil is a fictional character, a superhero in the DC Comics universe. He first appeared in Super Friends #7. His first canon appearance is Infinity, Inc. #32. 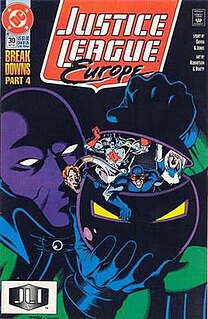 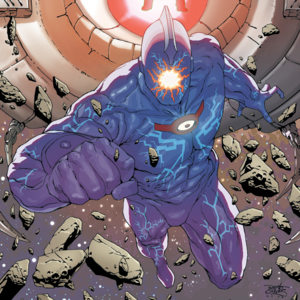 The OMACs are a fictional type of cyborg appearing in comic books published by DC Comics. They are based on the Jack Kirby character of the same name.

Doctor Mist is a fictional superhero published by DC Comics. He was created by E. Nelson Bridwell and Ramona Fradon, first appearing in a cameo in Super Friends #12.

Seraph is a DC Comics superhero from Israel. He first appeared in Super Friends #7, and was created by E. Nelson Bridwell and Ramona Fradon, art by Bob Oksner and lettered by Milt Snapinn. 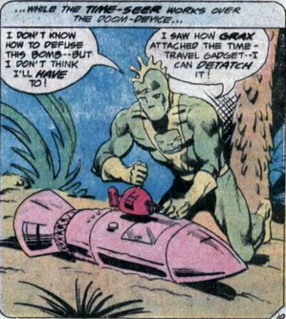 Tuatara is the name of two different characters appearing in comic books published by DC Comics.

The Olympian is the name of two fictional characters in DC Comics. 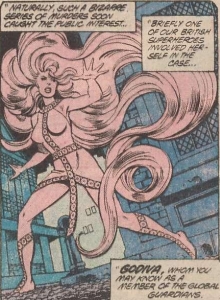 Godiva is the name of three DC Comics characters. One is a superhero while the other two are supervillains.

Blue Jay is a DC Comics superhero and a former member of the Champions of Angor, also known as the Justifiers. He has the ability to shrink to seven inches tall and grow blue wings that allow him to fly. Blue Jay is a homage to the Marvel Comics character Yellowjacket. He first appeared in Justice League of America #87.

Impala is a fictional character, a comic book superhero published by DC Comics. He first appeared in Super Friends #7 and was created by E. Nelson Bridwell and Ramona Fradon. The character is South African and has super-speed powers. 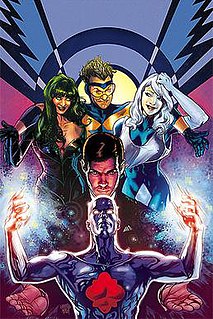 Justice League: Generation Lost was a year-long comic book limited series that premiered July 2010. It ran twice a month for 24 issues, alternating with Brightest Day, which was written by Geoff Johns and Peter Tomasi.

Shiera Sanders Hall is a fictional supporting character and later superheroine as Hawkgirl appearing in American comic books published by DC Comics. Shiera Sanders Hall was created by writer Gardner Fox and artist Dennis Neville, and first appeared in Flash Comics #1 as a romantic interest of Hawkman. Then later as one of DC's earliest super-heroines, she has appeared in many of the company's flagship team-up titles including the Justice Society of America.