Thunderstone is a fantasy deck-building card game series designed by Mike Elliott, with artwork by Jason Engle. It was first published by Alderac Entertainment Group in 2009. Each card has dimensions of 6.3 cm x 8.8 cm (2.5in x 3.5in). It has been translated into several languages. [1]

Gameplay involves building a deck of adventurers and equipment to defeat monsters. Each turn players must decide whether to visit the Village (to purchase cards, upgrade heroes and other actions), or if they will face a monster in the current dungeon (using the heroes and equipment in their hand). Defeated monsters are added to a player's deck as well, where they may contribute money and/or other bonuses when in hand.

Thunderstone Quest brings new play modes to the table. The game will tell a specific story with a series of pre-set dungeon tiles, monsters, heroes and support cards. Each will come with a series of mini-adventures and a story booklet that tells players what happens as they progress through the scenarios.

Once players have completed the quests they will be able to enjoy great replay value with the available selection of monsters, heroes, and support cards, as well as the new dungeon tiles, by choosing random set-ups before the start of play. Aside from heroes such as wizards, fighters, rogues, and clerics, cards will include supplies that heroes need like weapons, spells, items, or light to reach further into the dungeon.

The games denoted as B contain Base cards (Militia/Regulars, Daggers/Longspears, Torches, etc) and experience cards (tokens in Advance) and can therefore be played standalone. [4] [5] [6] [7] [8]

The Worlds Collide and Into the Abyss sets are selection of cards from the original series (Thunderstone and its 5 expansions), redesigned to match with the Advance series. Also many cards have been tweaked for more balance. [9] [10]

HeroQuest, sometimes written as Hero Quest, is an adventure board game created by Milton Bradley in conjunction with the British company Games Workshop. The game was loosely based around archetypes of fantasy role-playing games: the game itself was actually a game system, allowing the gamemaster to create dungeons of their own design using the provided game board, tiles, furnishings and figures. The game manual describes Zargon/Morcar as a former apprentice of Mentor, and the parchment text is read aloud from Mentor's perspective.

Days of Wonder is a board game publisher owned by Asmodee Group since 2014. Founded in 2002, Days of Wonder distributes its games to 25 countries. It specialises in German-style board games and have branched out to include some online games. Days of Wonder has published games in English, French, German, Spanish, Italian, Dutch, Hungarian, Finnish, Polish, Danish, Czech, Swedish, Norwegian, Korean, Japanese, Portuguese, Russian, Greek. Days of Wonder was co-founded by Eric Hautemont, Pierre Gaubil, Mark Kaufman & Yann Corno. Under the guidance of the company's Creative Director, Cyrille Daujean, the company quickly made a name for itself as a publisher of board games with top notch components and gorgeous designs. 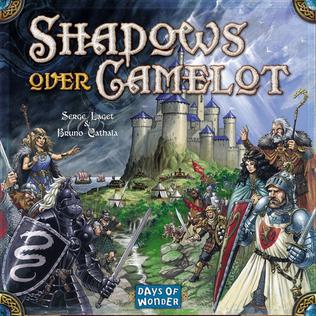 Shadows over Camelot is an Arthurian-themed board game designed by Serge Laget and Bruno Cathala, illustrated by Julien Delval and Cyrille Daujean. The game was unveiled by the publishers Days of Wonder at the 2005 American International Toy Fair and was more widely released in May and June 2005. The game was also published in French as Les Chevaliers de la Table Ronde and in German as Schatten über Camelot. In 2008, an expansion for Shadows over Camelot was released titled Merlin's Company. 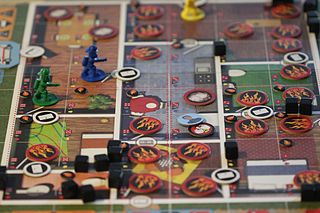 Cooperative board games are a loose category of board games where players work together in order to achieve a goal, either winning or losing as a group. As the name suggests, cooperative games stress cooperation over competition. This type of board game attracts people who enjoy the social aspect of games and is a good way to get new board game players interested in the hobby. Either the players win the game by reaching a pre-determined objective, or all players lose the game, often by not reaching the objective before a certain event ends the game.

Descent: Journeys in the Dark is a two to five player high fantasy dungeon crawl published by Fantasy Flight Games in 2005. Descent was designed and produced by Kevin Wilson. The game is based on an improved version of the mechanics of FFG's licensed Doom: The Boardgame. In Descent, players take the roles of adventurers who delve into underground complexes in search of treasure. One player takes the role of the Overlord, who controls the enemies and plays cards to hinder the hero players. Descent differs from other games in the genre in that the Overlord player's goal is to win by exhausting the other players of victory points, rather than merely to facilitate play. The Overlord's resources are limited by the rules of the game, which require them to hoard and expend "threat" points, which are generated in response to the hero players' actions, in order to hamper the other players and to bring out additional monsters to defeat them. This mechanism is very much reminiscent of The Lord of the Rings when playing with the Sauron optional expansion.

Runebound is a high fantasy adventure board game created by Martin Wallace and Darrel Hardy and published by Fantasy Flight Games in 2004. A second edition was published in 2005. A third edition was released in 2015. In Runebound, one to six players take the roles of adventurers who seek out quests. The quests are then resolved with either victory for the player, or a loss of some item. Each player is seeking quests and trying to gain experience which results in greater power and combat skill. 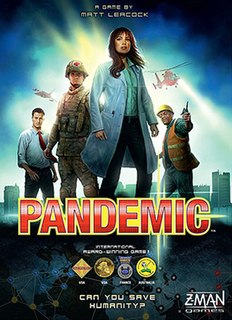 Pandemic is a cooperative board game designed by Matt Leacock and first published by Z-Man Games in the United States in 2008. Pandemic is based on the premise that four diseases have broken out in the world, each threatening to wipe out a region. The game accommodates two to four players, each playing one of seven possible specialists: dispatcher, medic, scientist, researcher, operations expert, Contingency Planner, or quarantine specialist. Through the combined effort of all the players, the goal is to discover all four cures before any of several game-losing conditions are reached.

7 Wonders is a board game created by Antoine Bauza in 2010 and originally published by Repos Production in Belgium. 7 Wonders is a card drafting game that is played using three decks of cards featuring depictions of ancient civilizations, military conflicts and commercial activity. The game is highly regarded, being one of the highest rated games on the board game discussion website BoardGameGeek. 7 Wonders has won a total of more than 30 gaming awards, including the inaugural Kennerspiel des Jahres connoisseurs' award in 2011. The game has been cited by leading designers as one of the most influential board games of the last decade.

Straw is an Arabian-nights-themed card game designed by Richard James and published by Alderac Entertainment Group in 2008, with artwork by Octographics. The game is packaged with a rule book in English, French, German, Italian, and Spanish, but the cards themselves use numbers and symbols instead of just text.

Castle Ravenloft Board Game is a 2010 board game published by Wizards of the Coast. It was the first game released in the Dungeons & Dragons Adventure System board game series.

Mike Elliott is a Seattle-based board game, card game and mobile game designer whose titles include Magic: The Gathering, Thunderstone, and Battle Spirits Trading Card Game. Magic head designer Mark Rosewater called him "one of the most prolific Magic designers in the history of the game." He was inducted into the Academy of Adventure Gaming Arts & Design Hall of Fame at the 2017 Origins Game Fair.

A deck-building game is a card game where construction of a deck is the main focus of gameplay. It is similar to collectible card games (CCGs) in that each player has their own deck. However, unlike CCGs, the cards are not sold in randomized packs, and the majority of the deck is built during the game, instead of before the game. Typically, the cards provide a type of game currency that allows players to buy more cards to add to their decks. 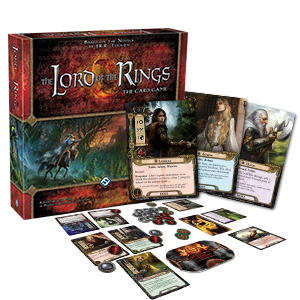 The Lord of the Rings: The Card Game is produced by Fantasy Flight Games. It is a cooperative game set in the fantasy world of JRR Tolkien's books. The initial time-frame for the game is the 17 years between Bilbo leaving the Shire and Frodo following him.

Freedom: The Underground Railroad is a 2013 co-operative board game designed by Brian Mayer and published by Academy Games, their first game in the Freedom Series. The game has drawn positive attention for its approach and handling of the topic.

Castle Panic is a board game designed by Justin De Witt and published by Fireside Games in 2009 Castle Panic is tower defense strategy game in which players work cooperatively to protect a castle from monsters.

Colt Express is a railway-themed family board game designed by Christophe Raimbault, Illustrated by Ian Parovel and Jordi Valbuena, published in 2014 by Ludonaute and distributed by Asmodee.

Love Letter is a card game introduced in May 2012 and designed by Seiji Kanai. It is produced in the United States by Z-Man Games.

Gloomhaven is a cooperative board game for 1 to 4 players designed by Isaac Childres and published by Cephalofair Games in 2017. As a fantasy dungeon crawl game with a branching narrative campaign, Gloomhaven features 95 unique playable scenarios, 17 playable classes, and more than 1,500 cards in a box which weighs almost 22 pounds.