Thunnai ezhuthu is a collection of Tamil essays by S. Ramakrishnan.

S. Ramakrishnan is an influentially important writer of modern Tamil literature. He is a full-time writer who has been active over the last 27 years in diverse areas of Tamil literature like short stories, novels, plays, children’s literature and translations. He has written and published 9 novels, 20 collections of short stories, 3 plays, 21 books for children, 3 books of translation, 24 collections of articles, 10 books on world cinema, 16 books on world literature including seven of his lectures, 3 books on Indian history, 3 on painting and 4 edited volumes including a Reader on his own works. He also has 2 collections of interviews to his credit.

S. Ramakrishnan is one of the most famous authors of the modern Tamil literature. A fiction writer, an essayist, a playwright, a movie critic and a world cinema expert. He wrote four novels, five short story collections, nine collections of essays and three books on films. Ramakrishnan was born in 1966 in Mallankinar, a small village zone of Virudhunagar district in Tamil Nadu. He took his Masters in Literature from the Madurai Kamaraj University. Some of his plays were selected for the national theatre festivals. 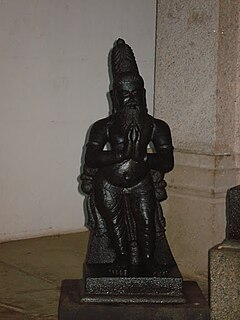 Tamil literature refers to the literature in the Tamil language. Tamil literature has a rich and long literary tradition spanning more than two thousand years. The oldest extant works show signs of maturity indicating an even longer period of evolution. Contributors to the Tamil literature are mainly from Tamil people from South India, including the land now comprising Tamil Nadu, Kerala, Sri Lankan Tamils from Sri Lanka, and from Tamil diaspora. The history of Tamil literature follows the history of Tamil Nadu, closely following the social, political and cultural trends of various periods. The early Sangam literature, starting from the period of 2nd century BCE, contain anthologies of various poets dealing with many aspects of life, including love, war, social values and religion. This was followed by the early epics and moral literature, authored by Hindu, Jain and Buddhist authors, lasting up to the 5th century CE. From the 6th to 12th century CE, the Tamil devotional poems written by Nayanmars and Alvars, heralded the great Bhakti movement which later engulfed the entire Indian subcontinent. It is during this era that some of the grandest of Tamil literary classics like Kambaramayanam and Periya Puranam were authored and many poets were patronized by the imperial Chola and Pandya empires. The later medieval period saw many assorted minor literary works and also contributions by a few Muslim and European authors.

Madurai Kamaraj University (MKU) is a public university in Madurai city in southern Tamil Nadu, India. It was established in 1966 and has about 130,000 students in 18 schools comprising 72 departments and 109 affiliated colleges.

His most famous novel Upa Paandavam was based on the Mahabharatham epic. Nedumkuruthi, his second novel was selected as the best Tamil novel of the year 2003. His Thunai ezhuthu is a notable collection of Tamil essays.

Work of S. Ramakrishnan is in various dimensions. He wrote the dialogues for many films, he translated several works from English and Malayalam to Tamil and many of his works got translated into English, Malayalam, Kannda, Telegu, Bengali and French. His latest novel Yaamam was well received by the modern circles of Tamil literature. Traveling is not simply a pastime but a passion for him. He is 42 years now and lives in Chennai with his wife Chandrapraba and two sons.

V. C. Sreejan is a literary critic writing in Malayalam. Born in 1951, he retired in 2007 after working as Reader in English in Government Brennen College, Thalassery. He has published eleven books in Malayalam. In 2003 he was awarded the Kerala Sahithya Akademi's C.B. Kumar Award' for his work Arthantharanyasm.

B. Jeyamohan is a Tamil and Malayalam writer and literary critic from Nagercoil in Kanyakumari District in the south Indian state of Tamil Nadu.

Vairamuthu Ramasamy is an Indian poet, lyricist and novelist working in the Tamil film industry and a prominent figure in the Tamil literary world. A master's graduate from the Pachaiyappa's College in Chennai, he first worked as a translator, while also being a published poet. He entered the Tamil film industry in the year 1980, with the film Nizhalgal, directed by P. Bharathiraja. During the course of his 40 year film career, he has written over 7,500 songs and poems which have won him seven National Awards, the most for any Indian lyricist. He has also been honored with a Padma Shri, a Padma Bhushan and a Sahitya Akademi Award, for his abundant literary output.

T. K. Doraiswamy, also known by his pen name Nakulan, was an Indian poet, professor of English, novelist, translator and short fiction writer, who wrote both in Tamil and English, and is known for his surrealism and experimentation as well as free verse. He served as Professor of English, Mar Ivanios College, Thiruvananthapuram for four decades. 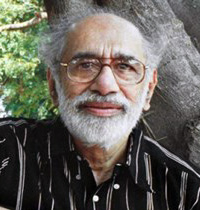 Akilan was a Tamil author noted for his realistic and creative writing style. Akilan was a freedom fighter, novelist, short-story writer, journalist, satirist, travel writer, playwright, script-writer, orator and critic. He is also a children's novelist.

Malayattoor Ramakrishnan was a prominent Malayalam writer and cartoonist from Kerala, India. He authored novels, short stories and biographical sketches. Yanthram, Verukal, Yakshi and Service Story are some of his most famous works. Malayattoor Ramakrishnan was also a practicing lawyer, a Judicial Magistrate and an Indian Administrative Service (IAS) officer, and has held various prominent posts.

George Varghese Kakkanadan, commonly known as Kakkanadan, was an Indian short story writer and novelist in the Malayalam language. His works made break from the neo-realism that dominated Malayalam literature through the 1950s and 1960s. He is often credited with laying the foundation of modernism in Malayalam literature. He is a recipient of Kendra Sahitya Akademi Award and Kerala Sahitya Akademi Awards in addition to numerous other awards and recognitions.

Subhash Chandran is a Malayalam novelist, short story writer and journalist best known for the 2010 novel Manushyanu Oru Aamukham. He is one of the most read young writers in contemporary Malayalam literature. His stories "Vadhakramam", "Sanmargam", "Parudeesa Nashtam" and "Guptham" have been adapted into films. He is the only writer to get Kerala Sahitya Akademi Award for both his debut story collection (2001) and debut novel (2011). He is also a recipient of Sahitya Akademi Award, Odakkuzhal Award and Vayalar Award.

Su. Samuthiram, was a Tamil writer from Tamil Nadu, India. 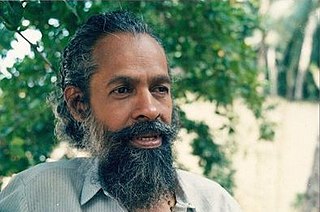 Neela Padmanabhan, is a Tamil writer from Nagercoil, India. He also writes in Malayalam.

Nanjil Nadan is the pseudonym of G. Subramaniam, a Tamil writer from Tamil Nadu, India. 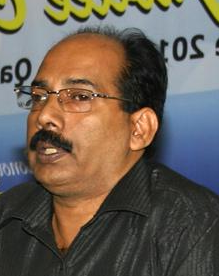 Akbar Kakkattil was an Indian short-story writer and novelist from Kerala state. His works are known for their unique narrative style which has an undertone of unfailing humour. Besides, the tales that he wrote centred on teachers and their foibles gave birth to a new genre in Malayalam literature. His 'Paadham 30' is the first teacher service story in Malayalam. His work, 'Sarga Sameeksha', a creative and critical interface of a young writer with the iconic writers of the old generation is perhaps the first of its kind among Indian languages.

Thoniyan Puthiyapurayil Shihabuddin, better known as Shihabuddin Poythumkadavu or Shihabuddin Poithumkadavu ,(Malayalam: ശിഹാബുദ്ദീൻ പൊയ്ത്തുംകടവ്; born 29 October 1963) is an Indian writer, journalist, poet, orator and television personality. He is a creative writer in Malayalam who has been writing short stories, novellas, novels, essays and poems since 1982. His works have appeared in all leading Malayalam magazines viz. Mathrubhumi weekly, Malayala Manorama annuals, India Today, Bhashaposhini, Kerala Kaumudi and the Samakalika Malayalam weekly. Most of his books have run into multiple editions with the sales of each book crossing around 10,000 copies. His stories have been prescribed by the Kerala State Education Board, University of Calicut, Mahatma Gandhi University and Kerala University as text books. He has also been translated to English, Hindi, Tamil and Arabic. He has been felicitated with awards several times by organizations such as the Kerala Sahitya Akademi, various other literary and cultural societies in India and abroad. He has scripted and directed many tele-films and serials, for Doordarshan, Asianet and Surya TV, including the script for one of the first mega serials in the Malayalam television, Kasavu. As a literary journalist, Shihabuddin has associated with three major weeklies: Poonkavanam (Kozhikode), Pravaasachandrika (Dubai) and Gulf Life in the capacity of editor and chief editor. He has traveled extensively in Middle Eastern countries such as the United Arab Emirates, Oman, Qatar and Bahrain, accepting the invitation of Malayali literary and cultural organizations. He was the Chief Programme Designer, Rahma Television Productions, in Kozhikode. Now Shihabuddin is working as periodical editor of Chandrika daily, in Kozhikode. His essay collection titled "Marujeevitham" that based on the Middle East diaspora published in 2014 had received well. Shihabuddin Poythumkadavu's books were translated into Arabic,Kannada,Tamil, Telugu, French and English. "Yarrikkum vendatha kan" his exclusive Tamil collection of short stories Translated by KV Shylaja, published by vamshi books, tiruvannamalai. Shihabuddin Poythumkadavu was born on 29 October 1963 at Poythumkadavu near Valapattanam in Kannur district, Kerala. He is married to Najma, now working in a Government Higher Secondary School near Pattambi as an English teacher, and the couple has 4 children. He has resided in Kunnamkulam, Thrissur district since 2000.

Imayam is a prominent and a well known Indian novelist in Tamil. He wrote five novels, five short story collections and a novella. He is closely connected with the Dravidian Movement and its politics. His novels 'Koveru Kazhudhaigal' and 'Arumugam', have won acclaim within Tamil literature and have been translated into English and French respectively.

Jayachandran Parameswaran Nair, better known by his stage name Unni R., is an Indian short-story writer and screenwriter, who is known for his work in Malayalam literature and Malayalam cinema. Born in Kudamaloor in Kottayam district, he is currently based in Thiruvananthapuram, Kerala, India. Unni R. won the Kerala State Film Award for Best Screenplay for the film Charlie (2015). His notable screenplays include Munnariyippu, Kullante Bharya in 5 Sundarikal and Bridge in Kerala Cafe. 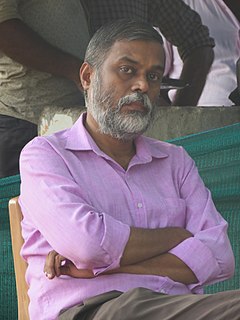 Thathamangalam Damodaran Ramakrishnan or T. D. Ramakrishnan is an Indian novelist and translator. He is the author of two best-selling Malayalam novels: Francis Itty Cora and Sugandhi Enna Andal Devanayaki. He is a recipient of the Kerala Sahitya Akademi Award and Vayalar Award.