Thunnosauria (Greek for "tuna lizard" – thunnos meaning "tuna" and sauros meaning "lizard") is an extinct clade of parvipelvian ichthyosaurs from the Early Jurassic to the early Late Cretaceous (Hettangian–Cenomanian) of Asia, Australia, Europe, North America, and South America. Named by Ryosuke Motani in 1999, it contains the basal taxa Ichthyosaurus and Stenopterygius and the family Ophthalmosauridae. In thunnosaurs, the fore fin is at least twice as long as the hind fin. [1] [2]

Thunnosauria is a node-based taxon defined in 1999 as "the last common ancestor of Ichthyosaurus communis and Stenopterygius quadriscissus and all of its descendants". [1] The cladogram below follows the topology from a 2010 analysis by Patrick S. Druckenmiller and Erin E. Maxwell. [3]

Ichthyosaurus is a genus of ichthyosaurs from the late Triassic and early Jurassic of Europe and Asia (Indonesia). It is among the best known ichthyosaur genera, as it is the type genus of the order Ichthyosauria.

Ophthalmosaurus is an ichthyosaur of the Jurassic period. Possible remains from the Cretaceous, around 145 million years ago, are also known. Named for its extremely large eyes, it had a 6 metres (20 ft) long dolphin-shaped body with jaws containing many small but robust teeth. Major fossil finds of this genus have been recorded in Europe with a second species possibly being found in North America.

Mixosaurus is an extinct genus of Middle Triassic ichthyosaur. Its fossils have been found near the Italy–Switzerland border and in South China. 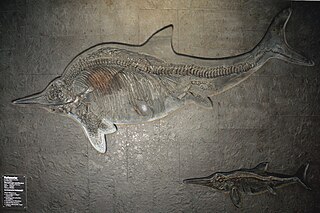 Stenopterygius is an extinct genus of thunnosaur ichthyosaur known from Europe. This genus of ichthyosaur grew to a maximum length of 4 meters.

Utatsusaurus hataii is the earliest-known ichthyopterygian which lived in the Early Triassic period. It was nearly 3 metres (9.8 ft) long with a slender body. The first specimen was found in Utatsu-cho, Miyagi Prefecture, Japan. It is the only described species in the genus Utatsusaurus and the only member of the family Utatsusauridae. The name Utatsusaurus was given after the city. The fossils have been found from the Early Triassic Osawa Formation of Miyagi Prefecture, Japan and British Columbia, Canada. 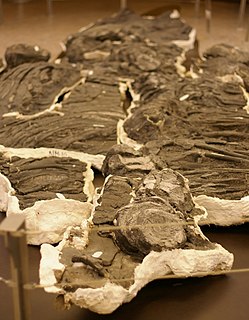 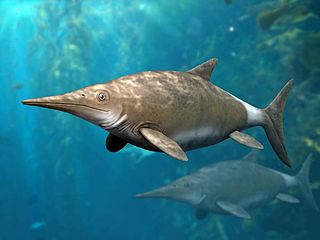 Brachypterygius is an extinct genus of platypterygiine ophthalmosaurid ichthyosaur known from the Late Jurassic of England. The type species was originally described and named as Ichthyosaurus extremus by Boulenger in 1904. Brachypterygius was named by Huene in 1922 for the width and shortness of the forepaddle, and the type species is therefore Brachypterygius extremus. The holotype of B. extremus was originally thought to be from the Lias Group of Bath, United Kingdom, but other specimens suggest it more likely came from the Kimmeridgian Kimmeridge Clay of Kimmeridge Bay, Dorset, UK.

Baptanodon is an ichthyosaur of the Late Jurassic period, named for its extremely large eyes. It had a graceful 6 m (19.5 ft) long dolphin-shaped body, and its almost toothless jaw was well adapted for catching squid. Major fossil finds of this genus have been recorded in North America. The type species, Sauranodon natans, was originally included under Sauranodon in 1879, but this name was preoccupied.

Maiaspondylus is an extinct genus of platypterygiine ophthalmosaurid ichthyosaurs known from Northwest Territories of Canada, the Cambridge Greensand of England and the Voronezh Region of Russia.

Macgowania is an extinct genus of parvipelvian ichthyosaur known from British Columbia of Canada. 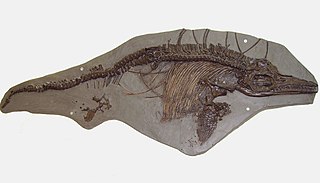 Parvipelvia is an extinct clade of euichthyosaur ichthyosaurs that existed from the Late Triassic to the early Late Cretaceous of Asia, Australia, Europe, North America and South America. Named by Ryosuke Motani, in 1999, it contains the basal taxa like Macgowania and Hudsonelpidia. Maisch and Matzke (2000) found in their analysis seven synapomorphies that support Parvipelvia. They also found 10 synapomorphies that support the existence of post-Triassic clade of ichthyosaurs, for which the name Neoichthyosauria was found to be available. 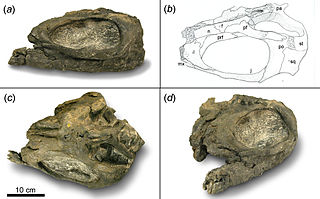 Merriamosauria is an extinct clade of ichthyosaurs. It was named by Ryosuke Motani in his 1999 analysis of the relationships of ichthyopterygian marine reptiles and was defined in phylogenetic terms as a stem-based taxon including "the last common ancestor of Shastasaurus pacificus and Ichthyosaurus communis, and all of its descendants." The name honours John Campbell Merriam. Based on this definition, Merriamosauria includes most ichthyosaurs except for several Triassic groups such as the clade Mixosauria, the family Cymbospondylidae, and perhaps the family Toretocnemidae. Merriamosaurs are characterized by features in their pectoral girdles and limb bones, including an extensive connection between the scapula and the coracoid bone, the absence of the first metacarpal and the absence of a pisiform bone. 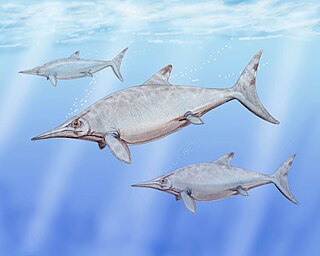 This timeline of ichthyosaur research is a chronological listing of events in the history of paleontology focused on the ichthyosauromorphs, a group of secondarily aquatic marine reptiles whose later members superficially resembled dolphins, sharks, or swordfish. Scientists have documented ichthyosaur fossils at least as far back as the late 17th century. At that time, a scholar named Edward Lhwyd published a book on British fossils that misattributed some ichthyosaur vertebrae to actual fishes; their true nature was not recognized until the 19th century. In 1811, a boy named Joseph Anning discovered the first ichthyosaur fossils that would come to be scientifically recognized as such. His sister Mary would later find the rest of its skeleton and would go on to become a respected fossil collector and paleontologist in her own right.

Patrick S. Druckenmiller is a Mesozoic paleontologist, taxonomist, associate professor of geology, Earth Sciences curator, and museum director of the University of Alaska Museum of the North, where he oversees the largest single collection of Alaskan invertebrate and vertebrate fossils. He has published work on plesiosaurs, ichthyosaurs, mastodons, and dinosaurs in the United States, Svalbard, and Canada. He has co-authored papers on discussions of mass extinctions and biogeography. Much of his work has focused on Arctic species. He is a member of the Spitsbergen Jurassic Research group, which focuses on marine reptiles. Druckenmiller has named many new genera and species, including Edgarosaurus muddi, Nichollsia borealis, Athabascasaurus bitumineus, Cryopterygius kristiansenae, Spitrasaurus larseni, and Spitrasauruswensaasi.