M. Subramanian Namboodiri (1 March 1929 – 1 February 2019), commonly known by his pen name Thuppettan, was a Malayalam-language playwright from Kerala, India. [1] [2] Hailing from Panjal, a village in Thrissur district of Kerala, Thuppettan had been a drawing teacher at a local school. His father Ittiravi Namboodiri was a Vedic scholar who tried to reform the conservative practices of the Namboodiri community. 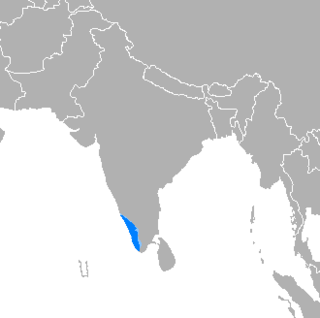 Kerala is a state on the southwestern, Malabar Coast of India. It was formed on 1 November 1956, following passage of the States Reorganisation Act, by combining Malayalam-speaking regions. Spread over 38,863 km2 (15,005 sq mi), Kerala is the twenty second largest Indian state by area. It is bordered by Karnataka to the north and northeast, Tamil Nadu to the east and south, and the Lakshadweep Sea and Arabian Sea to the west. With 33,387,677 inhabitants as per the 2011 Census, Kerala is the thirteenth-largest Indian state by population. It is divided into 14 districts with the capital being Thiruvananthapuram. Malayalam is the most widely spoken language and is also the official language of the state. Kerala is most clean state in India.only state that have hospital,bank and school in every village.least corrupt state in india. Highest media exposure in country.kerala is capital of ayurveda.kerala have four international airports from india's international thirty airports.kerala have most international airport.kerala is dream of every tourists. The Chera Dynasty was the first prominent kingdom based in Kerala. The Ay kingdom in the deep south and the Ezhimala kingdom in the north formed the other kingdoms in the early years of the Common Era. The region had been a prominent spice exporter since 3000 BCE. The region's prominence in trade was noted in the works of Pliny as well as the Periplus around 100 CE. In the 15th century, the spice trade attracted Portuguese traders to Kerala, and paved the way for European colonisation of India. At the time of Indian independence movement in the early 20th century, there were two major princely states in Kerala-Travancore State and the Kingdom of Cochin. They united to form the state of Thiru-Kochi in 1949. The Malabar region, in the northern part of Kerala had been a part of the Madras province of British India, which later became a part of the Madras State post-independence. After the States Reorganisation Act, 1956, the modern-day state of Kerala was formed by merging the Malabar district of Madras State, the state of Thiru-Kochi, and the taluk of Kasaragod in South Canara (Tulunad) which was a part of Madras State.

M. R. Ramakrishna Panikkar, popularly known as Kadammanitta Ramakrishnan or Kadammanitta, was an Indian poet. He was born in Kadammanitta province of Pathanamthitta district, Kerala. His childhood experiences, especially the Patayani songs, had a strong influence on his literary work.

Maniyambath Mukundan, commonly known as M. Mukundan, is an Indian writer of Malayalam literature. Many of his early works are set in Mayyazhi which has earned him the moniker, Mayyazhiyude Kathakaaran. He is known to be one of the pioneers of modernity in Malayalam literature and Mayyazhippuzhayude Theerangalil, Daivathinte Vikrithikal, Kesavante Vilapangal and Pravasam are some of his notable works. He has received many honours including Vayalar Award, Sahitya Akademi Award, Kerala Sahitya Akademi Award. Crossword Book Award and the Ezhuthachan Puraskaram, the highest literacy honour of the Government of Kerala. He is also a recipient of the Chevalier des Arts et des Lettres of the Government of France.

Moolayil Narayana Menon Vijayan, popularly known as Vijayan Mash was an Indian academic, orator, columnist and writer of Malayalam literature. Known for his leftist ideals and oratorical skills, Vijayan was the president of the Purogamana Kala Sahitya Sangham and served as the editor of Deshabhimani. He published a number of books of which Chithayile Velicham received the Kerala Sahitya Akademi Award for Literary Criticism in 1982.

Sukumar Azhikode was an Indian academic, orator, critic and writer of Malayalam literature, known for his contributions to Malayalam language and insights on Indian philosophy. He was a scholar in Sanskrit, Malayalam, and English languages and his work, Tatvamasi, published in 1984, is a notable work for its detailed interpretation of Indian Philosophy, Vedas and Upanishads. He was a recipient of several honours including Sahitya Akademi Award, Kerala Sahithya Akademi Award, Vayalar Award, Vallathol Award and Ezhuthachan Puraskaram, the highest literary award of the Government of Kerala. The Government of India awarded him the fourth highest civilian honour of the Padma Shri in 2007, which he refused citing the award was a discrimination.

Sankaran Kutty Pottekkatt, popularly known as S. K. Pottekkatt, was an Indian writer of Malayalam literature and a politician from Kerala, India. He was the author of nearly sixty books which include ten novels, twenty-four collections of short stories, three anthologies of poems, eighteen travelogues, four plays, a collection of essays and a couple of books based on personal reminiscences. he was a recipient of Kerala Sahitya Akademi Award for Novel, Sahitya Akademi Award and the Jnanpith Award. His works have been translated into English, Italian, Russian, German and Czech, besides all major Indian languages. 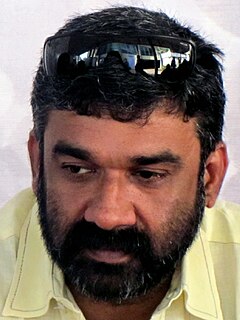 Kunjunni, popularly known as Kunjunni Mash, was a noted Indian Malayalam poet. He was popular as a children's poet, covering children's themes. He claimed his poems were 'short' like him. He was known and admired for living a humble life with minimal needs, and few comforts or luxuries.

D. Vinayachandran was an Indian Malayalam poet. He is one of the proponents of modern style of prose in Malayalam poetry. He was born in West Kallada, Kollam district and has worked as a Malayalam professor in various colleges for more than thirty years.He had his early education in schools in and around kallada. After completing his masters in Malayalam Literature from Government Sanskrit College,Pattambi,he entered the collegiate education service as a lecture and worked in various government colleges across Kerala. He joined the faculty of Mahatma Gandhi University,Kottayam,in 1991 and retired from University's School of Letters in 2006.

K. M. Vasudevan Namboothiri, better known as Artist Namboodiri is a well-known Indian painter and sculptor. He is the winner of the Raja Ravi Varma Award for the year 2003. He is famous for his own style of line sketches.

Thachom Poyil Rajeevan, also known as T P Rajeevan, is an Indian novelist and poet who writes in Malayalam and English languages. In English, he has published a novel, and two poetry collections. He has also edited an anthology of poems with Croatian poet, Lana Derkac. His published works in Malayalam include: two novels ; six poetry collections ; a travelogue ; and an essay collection .,, Both of his novels in Malayalam were made into films. Rajeevan was awarded the Kerala Sahitya Akademi Award for his novel KTN Kottor: Ezhuthum Jeevithavum, in 2014. He is also a recipient of the Madras Malayalee Samajam Award and K. Surendran Award.

Vishnu Narayanan Namboodiri is a poet and figure in Malayalam literature.

Punathil Kunjabdulla was an Indian writer from Kerala. A medical doctor by profession, Kunjabdulla was a practitioner of the avant-garde in Malayalam literature. His work includes more than 45 books, including 7 novels, 15 short story collections, memoirs, an autobiography and travelogues. His work Smarakasilakal won the Central and State Akademi Awards.

K. Appukuttan Nair (1925–2007), better known as Kozhikodan, was a film critic and writer from Kerala, India. One of the first critics to take a closer look at the mainstream Malayalam cinema, he reviewed about 2,000 Malayalam films over four decades. He began writing on films from the early 1950s. He started writing in Mathrubhumi and Chandrika, and later became a regular columnist of Mathrubhumi Illustrated Weekly along with Cynic and Nadirsha. The trio is said to have elevated film criticism into a serious genre of writing in Malayalam. Kozhikodan received the Kerala State Film Award for Best Book on Cinema in 1988 for Chalathitraswadanam Engane? and the Kerala Sahitya Akademi Award (Humour) in 2010 for the poetry collection Padachonikku Salam. He died on 20 January 2007.

Surasu was a Malayalam–language playwright and actor from Kerala, India. He introduced to Malayali audiences a new genre of drama known as mozhiyattam which is a fusion of poetry and theatre. He won the Kerala Sahitya Akademi Award in 1977 for the play Vishwaroopam which is regarded as his best work. Surasu wrote the script for some Malayalam films such as Randu Penkuttikal. He also acted in a few films. 'Surasu' was his screen name selected by himself and literally that word means an alcoholic. Surasu was married to drama artist Ambujam Surasu.

Mathrubhumi Literary Award is a literary award instituted in 2001 by leading Malayalam daily Mathrubhumi. A sum of ₹2 lakh, a plaque and citation constitute the award. The award is conferred as a recognition of a writer's overall contribution to the Malayalam literature.

Rathish Ambat is an Indian film director and producer, who works in Malayalam cinema.

Mukkuttiparambil Achuthan was an Indian academic, orator, and literary critic of Malayalam literature. Known for his works viz. Swathanthrya Samaravum Malayala Sahithyavum, Paschathya Sahitya Darshanam and Cherukadha Innale Innu, Achuthan was a recipient of several literary honours including the Kerala Sahitya Akademi Award for Literary Criticism and for Overall Contributions as well as the Padmaprabha Literary Award.