The Thur waterfalls are two cascades located on the river Thur approximately ten minutes walking from the village square of Unterwasser in the canton of St. Gallen, Switzerland, The water cascades down from steep rock faces, and on highest point drops from 23 metres (75 ft). [1] The road along the waterfalls was developed in 1927 and includes three observation decks.

The Tin Mine Falls is a cascade waterfall located in the remote Pilot Wilderness Area within the Kosciuszko National Park in the Snowy Mountains region of New South Wales, Australia. Described from top to bottom, the falls consist of non-segmented tiered cascades over bedrock with a few smaller plunges, followed by a single large plunge into a pool. The falls are recessed into a punchbowl feature making it impossible to view the entire waterfall from a single location on the ground.

Cascade, Cascades or Cascading may refer to:

Cascade Mountain is in Essex County of New York. It is one of the 46 Adirondack High Peaks (36th) and is located in the Adirondack Park. Its name comes from a series of waterfalls on a brook near the mountain's base. The lake it flows into and the pass between Cascade and Pitchoff mountains are also named Cascade.

The Staubbach Fall is a waterfall in Switzerland, located just west above Lauterbrunnen in the Bernese Highlands. The waterfall drops 297 metres (974 ft) from a hanging valley that ends in overhanging cliffs above the Weisse Lütschine.

Thalheim an der Thur is a municipality in the district of Andelfingen in the canton of Zürich in Switzerland. 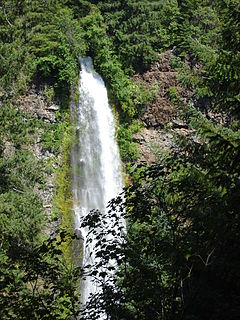 The Crystal Cascades is a cascade waterfall on the Freshwater Creek in the Far North region of Queensland, Australia.

Adyanpara Falls is a cascading waterfall in the Kurmbalangodu village of Nilambur taluk in Kerala, India. It is 14 kilometres (8.7 mi) from Nilambur town, and attracts tourists from various parts of Kerala. This is a seasonal waterfall. During Summer, water flow is low. This waterfall is of a natural cascading style as the waterfall descends over the rock. 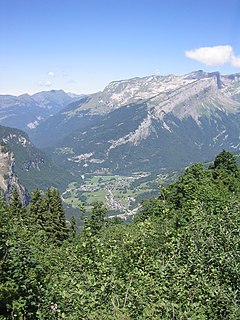 Vallorcine is a municipality in the Haute-Savoie department in the Auvergne-Rhône-Alpes region in south-eastern France.

The Grey Mare's Tail is a waterfall on the very edge of the Snowdonia National Park near Gwydir Castle in the county of Conwy, north Wales. It lies just off the B5106 road between the town of Llanrwst and the large village of Trefriw. The Welsh name, Rhaeadr y Parc Mawr, derives from the fact that the falls are fed by a large stream that has its source in the Gwydir Forest, and flows through the old Parc Mine, about a mile to the southeast. The name 'Grey Mare's Tail' was given to it by Lady Willoughby of Gwydir Castle, possibly "in compliment to Lord Byron and the Staubbach"

The geography of the North Cascades describes a range of rugged mountains in British Columbia, Canada and Washington, United States. In Canada, the range is officially named the Cascade Mountains but is commonly referred to as the Canadian Cascades.

Meruidae is a recently described family of aquatic beetles in the suborder Adephaga, with only one genus and species, Meru phyllisae. This beetle species was first found in the early 1980s. At 0.8 mm, it is one of the smallest adephagan beetles in the world. A recent survey of aquatic beetles of Venezuela prove that Meru is most common during the wet season, when larger areas of granitic rock surface are covered with water film, which the adult beetles as well as the larvae inhabit. 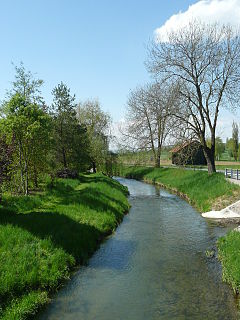 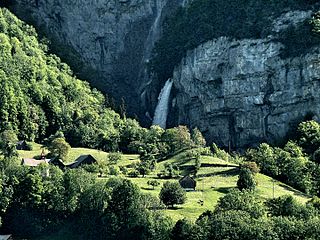 The Seerenbach Falls are a cascading set of three waterfalls near Betlis of the Amden municipality near the Walensee, Switzerland. The upper cascade has a height of 50m, the middle one of 305m, and the lower one of 190m, for a total of 585m.