The economy of Syria has deteriorated considerably since the beginning of the Syrian Civil War Moreover, Syria's economic history has been turbulent. In 1963, the Arab Socialist Ba'ath Party came to power, and instituted socialist policies of nationalization and land reform. In 1970, General Hafiz al-Assad took power. The restrictions on private enterprise were relaxed, but a substantial part of the economy was still under government control. By the 1980s, Syria found itself politically and economically isolated, and in the midst of a deep economic crisis. Real per capita GDP fell 22 percent between 1982 and 1989. In 1990, the Assad government instituted a series of economic reforms, although the economy remained highly regulated. The Syrian economy experienced strong growth throughout the 1990s, and into the 2000s. Syria's per capita GDP was 4,058 US dollars in 2010. There is no authoritative GDP data available after 2012, due to Syria's civil war. 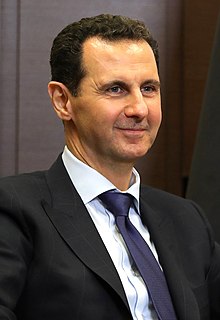 Elections in Syria gives information on election and election results in Syria. 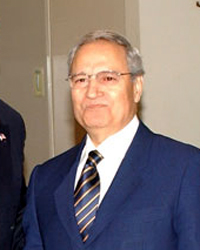 Farouk al-Sharaa is a Syrian politician and diplomat. He is one of the most prominent officials in the Syrian government and served as foreign minister of Syria from 1984 until 2006 when he became Vice President of Syria.

Abdul Halim Khaddam was a Syrian politician who was Vice President of Syria and "High Commissioner" to Lebanon from 1984 to 2005. He was long known as a loyalist of Hafez Assad, and held the strongest Sunni position within the Syrian government until he resigned his positions and left the country in 2005 in protest against certain policies of Hafez's son and successor, Bashar Assad.

The People's Council is Syria's legislative authority. It has 250 members elected for a four-year term in 15 multi-seat constituencies. There are two main political fronts; the National Progressive Front and Popular Front for Change and Liberation. The 2012 elections, held on 7 May, resulted in a new parliament that, for the first time in four decades, is based on a multi-party system. In 2016 Hadiya Khalaf Abbas, Ph.D., representing Deir Ezzor since 2003, became the first woman elected to be the Speaker. In 2017, Hammouda Sabbagh became the first Orthodox Christian to have held the post. 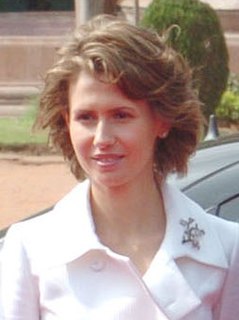 Asma al-Assad is the First Lady of Syria. Born and raised in London to Syrian parents, she is married to the 19th and current President of Syria, Bashar al-Assad. 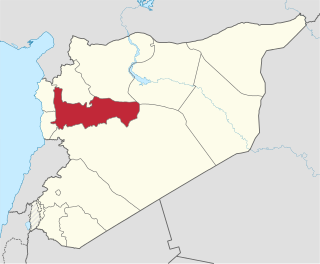 Syria, officially the Syrian Arab Republic, is a country in Western Asia, bordering Lebanon to the southwest, the Mediterranean Sea to the west, Turkey to the north, Iraq to the east, Jordan to the south, and Israel to the southwest. A country of fertile plains, high mountains, and deserts, Syria is home to diverse ethnic and religious groups, including Syrian Arabs, Kurds, Turkemens, Assyrians, Armenians, Circassians, Mandeans and Greeks. Religious groups include Sunnis, Christians, Alawites, Druze, Isma'ilis, Mandeans, Shiites, Salafis, Yazidis, and Jews. Arabs are the largest ethnic group, and Sunnis the largest religious group.

Aref Dalila is a Syrian economist and former Dean of the Faculty of Economics in Damascus University. He is currently working as a Senior Economic Researcher at Orient Research Center in the UAE. He was sentenced to ten years' imprisonment in 2002 on charges of "trying to corrupt the constitution, inciting armed rebellion and spreading false information" for his political activity during the Damascus Spring period, and imprisoned until released by presidential pardon in 2008.

The media of Syria consists primarily of television, radio, Internet, film and print. The national language of Syria is Arabic but some publications and broadcasts are also available in English and French. While television is the most popular medium in Syria, the Internet has become a widely utilized vehicle to disseminate content. Transcending all available media, the government seeks to control what Syrians see by restricting coverage from outside sources. Publications and broadcasts are monitored by members of the government. Syria is ranked as one of the most dangerous places in the world for journalists. There were 28 journalists killed in combat in 2012. 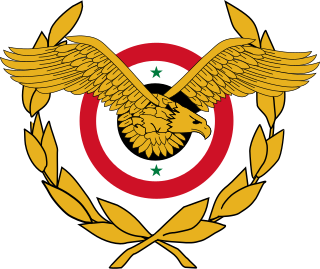 The Air Force Intelligence Directorate is an intelligence service of Syria, possibly the country's most powerful, owing its importance to Hafez al-Assad's role as the Air Force commander. Despite its name, it is mainly involved with issues other than air force intelligence, and took an active part in the suppression of the Muslim Brotherhood rebellion in the 1980s. Agents of this service have frequently been stationed in Syrian embassies or branch offices of the national airline.

Hafez Makhlouf is a Syrian former intelligence officer who was head of the internal branch of the General Security Directorate, Syria's civilian intelligence agency. He was a member of Syrian president Bashar al-Assad's "inner circle" of close supporters. 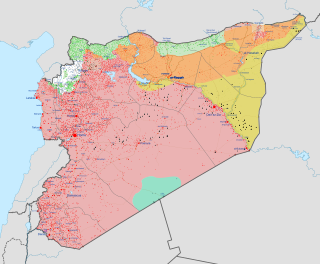 The Syrian civil war is an ongoing multi-sided civil war in Syria fought between the Ba'athist Syrian Arab Republic led by Syrian President Bashar al-Assad, along with domestic and foreign allies, and various domestic and foreign forces opposing both the Syrian government and each other in varying combinations. The war is currently the second deadliest of the 21st century.

Riyad Farid Hijab is a Syrian politician. He was Prime Minister of Syria from June to August 2012, serving under President Bashar al-Assad. From 2011 to 2012, he was Minister of Agriculture.

Burhan Ghalioun, is a French-Syrian professor of sociology at the Université de Paris III Sorbonne University in Paris, and the first chairman of the Syrian opposition Transitional National Council (SNC). He was named chairman on 29 August 2011. His chairmanship was criticized for his perceived closeness to the Muslim Brotherhood, his early reluctance to arm opposition forces, and what opponents called the autocratic nature of his leadership. On 17 May 2012, feeling he had become an increasingly divisive figure for the council, Ghalioun resigned.

The National Coordination Committee for Democratic Change (NCC), or National Coordination Body for Democratic Change (NCB), is a Syrian bloc chaired by Hassan Abdel Azim consisting of 13 left-wing political parties and "independent political and youth activists". It has been defined by Reuters as the internal opposition's main umbrella group. The NCC initially had several Kurdish political parties as members, but all except for the Democratic Union Party left in October 2011 to join the Kurdish National Council. Some opposition activists have accused the NCC of being a "front organization" for Bashar al-Assad's government and some of its members of being ex-government insiders.

Abdulbaset Sieda is a Kurdish-Syrian academic and politician. He is the former President of the Syrian National Council (SNC), succeeding Burhan Ghalioun in June 2012. He has written a number of books on the Kurds in Syria and his academic work specializes in ancient civilizations. 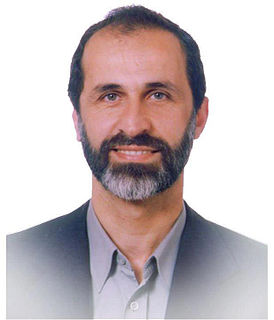 Ahmad Moaz Al-Khatib Al-Hasani is a former president of the National Coalition for Syrian Revolutionary and Opposition Forces. He is also a former imam of the Umayyad Mosque in Damascus.

Al-Muhafaza Sports Club is a Syrian football club based in Damascus.