Thuraya al-Hafez (1911-2000), (Arabic ثريا الحافظ) was a Syrian politician who campaigned against the niqab and for women's rights.

After schooling in Damascus, Thuraya became in 1928 one of Syria's first female primary school teachers. Around this time, Thuraya established the Damascene Women's Awakening Society to promote a female intelligentsia, and became a prominent women's rights activist in the 1930s. 1930 saw her establishing the Women's School Alumnae Association for educated women. In May 1942, she led a protest march by one hundred women to the government headquarters in Damascus, where they all lifted their veils. She gave a speech arguing that 'the veil we wore was never mentioned in God's Holy Book or by the Prophet Mohammad'. [1] In 1947, she became an instructor in Arabic literature at Damascus's prestigious Tajheez School.

In the 1950s, Thuraya became the first woman to nominate herself for a seat in the Syrian parliament. [2] Although she was subsequently defeated, her endeavours were significant steps toward achieving their goal of elevating the status of the women in the Arab world. She claimed that the vote itself was tampered with and that she had in fact secured 75% of the vote.

Thuraya's husband, Munir al-Rayyes, owned the Damascus daily paper Barada, for which Thuraya began writing in 1953. In the same year, she 'launched her own literary and political salon in Damascus, which was open to both genders. The salon was convened in her own house and was named after Sukayna bint al-Hussein, the great-granddaughter of Prophet Muhammad, who presided over the first literary salon in Muslim history'. [3]

Like her husband, Thuraya supported Gamal Abdel Nasser of Egypt both during and after the United Arab Republic. [4]

Sami Moubayed is a Syrian historian and writer who has written extensively on the modern history of Damascus from the late Ottoman period until creation of the Syrian-Egyptian union republic in 1958. In 2017 he co-founded The Damascus History Foundation, a non-governmental organization aimed at preserving the archives of the ancient city of Damascus, threatened with extinction because of age, poor preservation, or neglect, becoming its founding chairman.

Jamal Al-Atassi (1922−2000) was a Syrian Arab nationalist, politician and author. He was one of the earliest ideologues of the nascent Syrian Ba'ath Party, which he joined soon after it was founded. He helped to lay out its constitution and was the man who came up with the party's motto, "One united Arab Nation with an eternal Message." He also served as chief editor of the party's daily newspaper, Al Baath.

Lu'ay al-Atassi was a senior commander in the Syrian Army and later the President of Syria between 9 March and 27 July 1963. 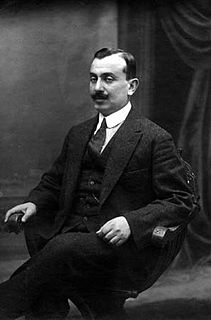 Jamil al-Ulshi was a Syrian politician, 2-time Prime Minister of Syria and acting head of state during the French Mandate era. 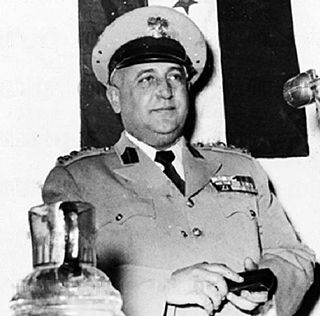 Maamun al-Kuzbari was a Syrian literary personality, politician and acting head of state from a prominent Damascus family.

Prince Mustafa Shahabi was a Syrian agronomist, politician, writer and the third elected director of Arab Academy of Damascus (1959–1968).

Sabah Qabbani was appointed ambassador of Syria to the United States by President Hafez Al-Asad in 1974. The post had been vacant since 1967 when diplomatic relations between Syria and the United States were severed following the 1967 Arab-Israeli war. Prior to his posting in Washington, D.C. he was Syria’s envoy to Indonesia and Syria's consul in New York.

Marjeh Square, also known as "Martyrs' Square", is a square in central Damascus, Syria, just outside the walls of the old city. The Syrian Interior Ministry has its headquarters in the square.

The National Party was a Syrian political party founded in 1948, eventually dissolving in 1963. It grew out of the National Bloc, which opposed the Ottomans in Syria, and later demanded independence from the French mandate. While dominant party in 1940s and early 1950s, it was replaced by his pro-Hashemite rival, the People's Party.

Adnan al-Malki was a Syrian Army officer and political figure in the mid-20th century. He served as the deputy-chief of staff of the army and was one of the most powerful figures in the army and in national politics until his assassination, blamed on a SSNP militant in 1955.

The People's Party was a Syrian political party, that dominated Syrian politics during the 1950s and the early 1960s, for almost a decade. The party was founded in 1925 by Abd al-Rahman Shahbandar, and alongside its rival, the National Party, was part of the National Bloc, a national coalition that played an important role in the Syrian struggle against the French mandate.

Abdullah Atfeh (1897–1976) was a Syrian career military officer who served as the first chief of staff of the Syrian Army after the country's independence. 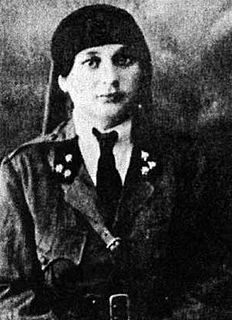 Nazik Khatim al-ʿAbid Bayhum was known as the "Joan of Arc of the Arabs" and as a women's rights activist and critic of Ottoman and French colonialism in Syria. She was the first woman to earn rank in the Syrian Army for her role in forming the Red Star Society, a precursor to the International Red Cross and Red Crescent Movement, during the battle of Maysalun. She was a revolutionary for national independence and women's right to work and vote in Syria.

Ahmad al-Sharabati was a Syrian politician and the defense minister of Syria between 1946 and 1948, serving in the post as Syria gained its independence from France and during the early days of the 1948 Arab-Israeli War.

Mary Ajami was a Syrian feminist and pioneering Arabic-language writer who launched one of the first women's magazines in the Arab world called al-'Arus. 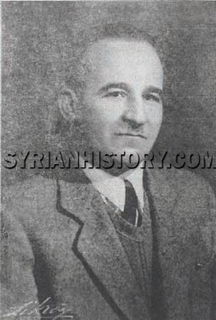 Munīr al-Rayyis (1901–1992) was a prominent Syrian newspaper editor and writer.

Salma Mardam Bey is a Syrian writer and historian.

Widad Sakakini was a writer and critic from Lebanon.