Thuraya AlArrayed:(Arabic : ثريا العريض‎) is an Arabic language Saudi poet and writer she was born in 1948, and received a bachelor's degree from the College of Beirut, in 1966, and then an MBA from American University of Beirut in 1969 and PhD from the University of North Carolina, United States General in 1975.

Worked in several areas, including the Ministry of Education in Bahrain between 1967 and 1969 and joined the Saudi Arabian Oil Company (Aramco) is the largest oil company in the world year in 1980 and ceased to day and works as a consultant for planning.[ citation needed ]

Dr. Thuraya Al Arrayed is a well-known Arab thought leader and journalist whose regular columns tackling current and controversial issues are read by a broad readership of Saudi and Arabic newspapers. She is also a frequent guest on both Arab and international radio and television programs dealing with cultural, social, educational and literary issues. She participates in a proliferation of national, regional and international forums and conferences regarding issues of importance to the Arab world. An active advisor to NGO�s in Saudi Arabia and the Arab region, she works in Saudi Aramco as a planning advisor. She is member of the Research and Advisory Group Saudi Aramco Affairs, and the Advisory Team of the Arab Thought Foundation as well as several other influential organizations. The recipient of numerous scholastic and academic awards, Ms. Arrayed received her BA from BCW Beirut College for Women, MA in Educational Administration from AUB the American University of Beirut and PhD in Ed. Planning and Administration from UNC University of North Carolina at Chapel Hill. She lives in Dhahran, Saudi Arabia. [1]

Abdul Rahman bin Faisal bin Turki Al Saud was the last ruler of the Emirate of Nejd, the second Saudi state. He was the youngest son of Faisal bin Turki bin Abdullah Al Saud and the father of King Abdulaziz, who founded the modern Saudi Arabia.

Dammam is the sixth-most populous city in Saudi Arabia after Riyadh, Jeddah, Mecca, Medina and Khamis Mushait. It is the capital of the Eastern Province. With a total population of 1,252,523 as of 2020. The judicial and administrative bodies of the province, in addition to the administrative offices of other minor governmental departments functioning within the province, are located in the city. The word itself is generally used to refer to the city, but may also refer to its eponymous governorate.

Qatif or Al-Qatif is a governorate and urban area located in Eastern Province, Saudi Arabia. It extends from Ras Tanura and Jubail in the north to Dammam in the south, and from the Persian Gulf in the east to King Fahd International Airport in the west. This region has its own municipality and includes the Qatif downtown and many other smaller cities and towns.

Sawsan al-Sha'er is widely regarded as Bahrain's most influential liberal intellectual. A journalist and author, she is a columnist with Al-Watan newspaper, having joined the staff there from the pro-government Al-Ayam.

Ghazi Abdul Rahman Al Gosaibi was a Saudi politician, diplomat, technocrat, poet, and novelist. He was an intellectual and a member of the Al Gosaibi family that is one of the oldest and richest trading families of Saudi Arabia and Bahrain. Al Gosaibi was considered among Saudi Arabia's topmost technocrats since the mid-1970s. The Majalla called him the "Godfather of Renovation" while Saudi journalist Othman Al Omeir argued that he was "the only great man in Saudi Arabia." 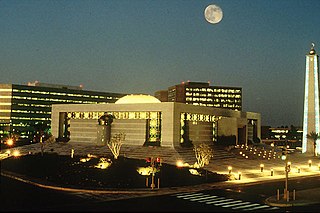 Dhahran is a city located in Eastern Province, Saudi Arabia. With a total population of 240,742 as of 2021. It is a major administrative center for the Saudi oil industry. Together with the nearby cities of Dammam and Khobar, Dhahran forms part of the Dammam Metropolitan Area, which is commonly known as greater Dammam and has an estimated population of 4,140,000 as of 2012.

Mohammed Jaber Al-Ansari, is a prominent Bahraini philosopher and political thinker, and an influential proponent of rational thinking in the 20th-century Arab World. He played a pivotal role in establishing the previously peripheral Persian Gulf region as an integral contributor to modern Arabic thought, on equal footing with other parts of the Arab World. His early work as a literary historian, and critic, instigated wide literary activity in his native Bahrain and in its surrounding Persian Gulf region. Al-Ansari was one of the early Arab intellectuals to delve into studying the East Asian experiences and draw comparisons with the Arab World.

Dr. Turki Faisal Al-Rasheed is a prominent Saudi businessman, he is the chair and the Founder of Golden Grass Incorporated in Riyadh. His company was listed as one of the top 100 companies in Saudi Arabia, focusing in exporting peanuts, agricultural products and chemicals, construction, and manpower. He Also serves as a board member of the National Agriculture Development Company (NADEC), an Agriculture Committee of the Riyadh Chamber of Commerce and serve as the President and Chairman of Turki Faisal International Corporation (TFIC), from 1981 to present

Al Watan is an Arabic daily newspaper published in Manama, Bahrain. It is known to have pro-government stance.

Al-Arab was an Arabic-language news channel which vowed to practice objective journalism. It was launched on 1 February 2015 and almost immediately shut down. The channel was owned by Saudi prince and entrepreneur Al-Waleed bin Talal, and was based in Manama, Bahrain.

Television in Saudi Arabia was introduced in 1954,dominated by just four major companies: Middle East Broadcasting Center, SM Enterprise TV, Lebanese Broadcasting Corporation, Rotana and Saudi TV. Together, they control 80% of the pan-Arabe broadcasting market. Saudi Arabia is a major market for pan-Arab satellite and pay-TV. Saudi investors are behind the major networks MBC, which is based in Dubai, and Emirates based OSN. The Saudi government estimated that in 2000 the average Saudi spent 50% to 100% more time watching television than his or her European or US counterpart. On average, 2.7 hours are spent daily watching TV in Saudi Arabia.

The Arabian Peninsula People's Union was a Nasserist political party in Saudi Arabia. The APPU was founded in 1959 by Nasser Al Saeed whilst in exile in Beirut. Saeed had been exiled due to his leadership of the ARAMCO strikes in 1956. The APPU was regarded as one of the most important and most diverse opposition groups.

Dr. Moudi A. Al-Humoud, is currently a professor of management at the College of Business Administration, Kuwait University. She served as president of Arab Open University, a pan Arab university operating in Kuwait, Kingdom of Saudi Arabia, Oman, Bahrain, Jordan, Lebanon, Egypt, Sudan and Palestine.

Abdullah bin Ahmed bin Abdullah Al-Maghlouth is a Saudi journalist and the director-general of Saudi Center for Government Communication. He is from Al-Ahsa, Saudi Arabia, and he was born in July 24, 1978. He worked in several Arab and Saudi newspapers and magazines such as: Al Yaum, Al-Hayat, Al Watan, Elaph, Al-Qafila, Forbes, and Tirhal.

Ranah Mustafa Ahmed Nazza (born 16 May 1969 in Taif, Saudi Arabia) is a Jordanian writer and poet. She is a member of the Jordanian Writers' Association. She first signed her poems as "Getan" and went from glitter to disclosure. Her poetry is characterized by Sufi vocabulary influenced by Ibn al-Faqir, Ibn al-Arabi, Al-Nafri and others.

Al Qafilah was a weekly newspaper published in Manama, Bahrain, between 1952 and 1956.

Ali Sayyar was a veteran Bahraini journalist who founded and edited a newspaper, Al Qafilah, and a magazine, Sada Al Osbou. He was one of the founding fathers of the Bahraini press.