Below are the results for Thure Ahlqvist, a Swedish lightweight boxer who competed at the 1932 Los Angeles Olympics: 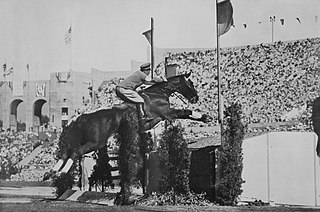 The equestrian events at the 1932 Los Angeles Summer Games included dressage, eventing, and show jumping. The competitions were held from 10 to 14 August 1932. Due to the Great Depression, and the fact that the Games were held in Los Angeles, only 31 entries from 6 nations competed—which was to be the lowest participation of any Olympic Games.

Héctor López Colín was a Mexican boxer who was the NABF and WBO NABO Light Welterweight Champion. He also won an Olympic Silver medal for Mexico in the Bantamweight division.

George Kelly Scott, earlier George Cramne, is a retired Swedish professional boxer of Liberian descent. He won the Swedish championship five years in a row, took a silver medal in the Olympic games in Seoul 1988. He became a pro boxer and trained for the legendary Angelo Dundee and won the world champion belt for WBU. He never lost his belt in the ring, but would later have it taken away from him following a disagreement with his manager.

Salvatore Todisco was a light flyweight boxer from Italy, who won the silver medal in the light flyweight division at the 1984 Summer Olympics in Los Angeles, California. In the final he was defeated by Paul Gonzales of the United States. He died in a car accident on November 25, 1990 at the age of 29.

Viktor Leonidovich Demyanenko is a retired boxer, who represented the USSR at the 1980 Summer Olympics in Moscow, Soviet Union. There he won the silver medal in the lightweight division, after being defeated in the final by Cuba's Ángel Herrera. Demyanenko trained at Dynamo in Alma-Ata. He won gold at the 1979 European Championship. During his career Demyanenko won 267 fights out of 290.

Simion Cuțov was a lightweight boxer from Romania who won the European amateur title in 1973 and 1975. He competed at the 1974 World Championships and 1976 and 1980 Olympics and won silver medals in 1974 and 1976. In 1974, he won a gold medal at the Balkan Games. He retired with a record of 20 losses out of 155 bouts. His elder brother Calistrat was also an Olympic boxer.

The Central African Republic competed at the 1984 Summer Olympics in Los Angeles, United States. It had been 16 years since the previous appearance of the nation at the Summer Olympics, when it made its debut at the 1968 Games in Mexico City, Mexico. The Central African Republic was represented by three athletes; marathon runner Adolphe Ambowodé and two boxers, Dieudonné Kossi and Antoine Longoudé. There were no medals won by the trio. 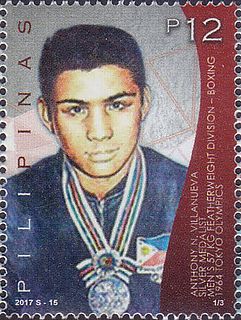 Anthony N. Villanueva was a boxer from the Philippines. He competed in the featherweight division at the 1964 Olympics and won a silver medal. Shortly after the Olympics he turned professional, but retired after five bouts. Besides boxing, Villanueva worked as an actor and boxing coach in the Philippines and as a security guard in the United States. He died penniless and bedridden after suffering several strokes.

Carmine R. DiBartholomeo, better known as Carmen Barth, was a male American boxer who competed in the 1932 Summer Olympics. He was born and raised in the Collinwood neighborhood of Cleveland, Ohio and died in Lorain, Ohio. 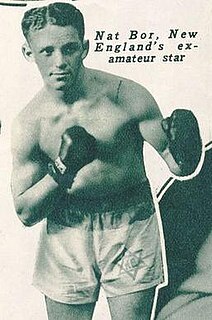 Nathan "Nat" Bor was an American boxer who won a light weight bronze medal at the 1932 Summer Olympics. He continued primarily a professional welterweight boxing career until around 1940, when he served as a Marine in WWII, before returning to start a dry cleaning business in his home of Fall River, Massachusetts.

Carl Allan Carlsson was a Swedish boxer who won a bronze medal in the featherweight division at the 1932 Summer Olympics.

Lawrence "Laurie" Stevens was a South African boxer who competed in the 1932 Summer Olympics. He was born in Johannesburg and died in Durban, Natal.

Amado Azar was an Argentine boxer who competed in the 1932 Summer Olympics. In 1932 he won the silver medal in the middleweight class after losing the final against Carmen Barth of the United States. Azar was the brother of fellow boxer Jorje Azar.

Laureano Ramírez Padilla is a retired Dominican boxer, who represented his native country at the 1984 Summer Olympics in Los Angeles in the Men's Flyweight division.

Hyman Barnett "Harry" Mizler was an English boxer who competed for Great Britain in the 1932 Summer Olympics and won the British BBoC Lightweight title in January 1934.

The men's Greco-Roman lightweight competition at the 1932 Summer Olympics in Los Angeles took place from 4 August to 7 August at the Grand Olympic Auditorium. Nations were limited to one competitor. This weight class was limited to wrestlers weighing up to 66kg.