In the mid-1930s Sjöstedt turned professional and toured the United States with teammate Johan Richthoff. He later developed alcoholism problems and was eventually found dead in his garden cottage. [1] [2]

Hamza Yerlikaya is a Turkish Graeco-Roman style wrestler. He is a two-time Olympic champion, three-time World Champion, and the first Turkish wrestler to become European champion a record eight times, a feat that has since been matched by Rıza Kayaalp. He was named The Wrestler of the century in 1996 by the International Federation of Associated Wrestling Styles (FILA).

Jonas Sjöstedt is a Swedish politician who is the current chairman of the Left Party since 2012, and a former metalworker. He is also a member of the Swedish parliament since 2010.

Thure Valdemar Lindgren was a Swedish ski jumper who won an individual silver medal in the large hill at the 1950 World Championships. He finished 40th in the normal hill at the 1952 Winter Olympics. 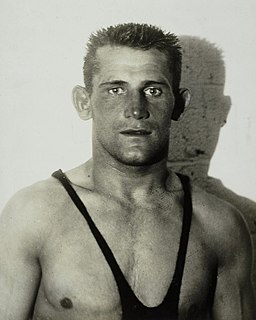 Yaşar Doğu, was a renowned Turkish World and Olympic champion sports wrestler in Greco-Roman and Freestyle.

Martin Lidberg is a Swedish wrestler. He is a world champion, two-time European champion as well as 19-time Swedish champion. He has competed in the olympics three times. In 2007 he won Let's Dance 2007 in Sweden together with his dancing partner Cecilia Ehrling, defeating Tobbe Blom, host of Idol 2005. Lidberg and Ehrling represented Sweden in the Eurovision Dance Contest 2007, where they placed 14th.

Johan Cornelius "Snövit" Richthoff was a Swedish wrestler. He competed in the freestyle heavyweight division at the 1924, 1928 and 1932 Summer Olympics and won gold medals in 1928 and 1932; he shared fourth place in 1924.

Johan Rudolf "Starke Rudolf" Svensson was a Swedish wrestler. He competed at the 1924, 1928 and 1932 Summer Olympics in four freestyle and Greco-Roman events in total, and won a gold or silver medal in each of them.

Lawrence "Laurie" Stevens was a South African boxer who competed in the 1932 Summer Olympics. He was born in Johannesburg and died in Durban, Natal. 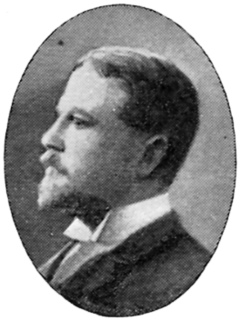 Thure Andersson was a Swedish wrestler. He was born in Ölme. He won an Olympic silver medal in Freestyle wrestling in 1936.

Bengt Olof Albert "Benkku" Sjöstedt was a Finnish hurdler. He equalled the world record for 110 m hurdles in 1931 and competed at the 1928 and 1932 Summer Olympics.

Sjöstedt or Sjoestedt is a surname of Swedish origin. Notable people with the surname include:

The men's freestyle light heavyweight competition at the 1932 Summer Olympics in Los Angeles took place from 1 August to 3 August at the Grand Olympic Auditorium. Nations were limited to one competitor. This weight class was limited to wrestlers weighing up to 87kg.