Contained within the boundaries of the wapentake are parts of the current Newark and Sherwood district, Gedling borough and the City of Nottingham. 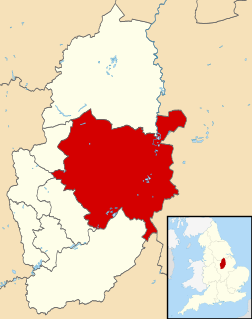 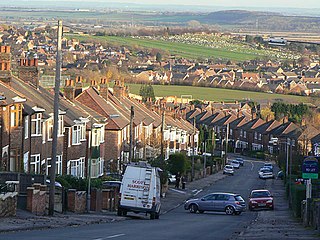 Rushcliffe is a constituency represented in the House of Commons of the UK Parliament from 2019 by Ruth Edwards, a Conservative. From 1970 until 2019, it was represented by Kenneth Clarke who was the Father of the House of Commons from 2017 until 2019. He also served under the governments of Margaret Thatcher, John Major and David Cameron respectively. Clarke was one of only 5 ministers to serve throughout the whole 18 years of the governments of Margaret Thatcher and John Major. His political career is the fifth-longest in the modern era and he is a notable figure in British politics.

Gedling is a constituency created in 1983 represented in the House of Commons of the UK Parliament since 2019 by Tom Randall of the Conservative Party. The seat is one of the dozens of the UK seats held by Labour in 2017, but gained by the Conservatives in 2019.

The Nottingham–Lincoln line is a railway line in central England, running north-east from Nottingham to Lincoln.

Basford was a rural district close to Nottingham, England, from 1894 to 1974. The district consisted of two detached parts, to the north and south of Nottingham. It was created under the Local Government Act 1894 based on the existing Basford rural sanitary district.

Gedling is a village in the Gedling district, in Nottinghamshire, England, four miles northeast of Nottingham city centre. The population at the 2011 census of the ward was 6,817 and 111,787 for the district. Gedling was once a distinct settlement, having been recorded in the Domesday Book, although nowadays—due to the growth of Nottingham—it is difficult to separate it from the neighbouring town of Carlton.

Netherfield is a town in the city of Nottingham, in the English ceremonial county of Nottinghamshire. It is situated to the east of Nottingham's city boundary in the borough of Gedling, approximately 3 miles (4.8 km) between Colwick and Carlton in the NG4 postcode area, and near the River Trent. The appropriate Gedling ward is called 'Netherfield and Colwick'. At the time of the 2011 census, the population of this ward was 7,398. 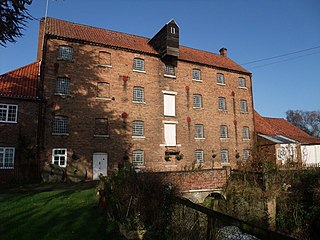 The A612 road is an A-class road in the United Kingdom running between Nottingham and Averham, on the A617 near Newark.

St. Wilfrid's Church, North Muskham is a parish church in the Church of England in North Muskham, Nottinghamshire.

Fledborough is a hamlet in Nottinghamshire, England. Although now redundant, the Anglian parish church of St Gregory's, earned the hamlet the nickname of "the Gretna Green of the Midlands" in the 18th century, due to the ease in which couples could obtain a marriage licence from the Reverend W. Sweetapple.