Thuria may refer to:

Thuria or Thouria was a town of ancient Messenia, situated in the eastern part of the southern Messenian plain, upon the river Aris, and at the distance of 80 stadia from Pharae, which was about a mile from the coast. It was generally identified with the Homeric Antheia, though others supposed it to be Aepeia. It must have been a place of considerable importance, since the distant Messenian Gulf was even named after it. It was also one of the chief towns of the Lacedaemonian Perioeci after the subjugation of Messenia; and it was here that the Third Messenian War took its rise in 464 BCE. On the restoration of the Messenians by Epaminondas, Thuria, like the other towns in the country, was dependent upon the newly-founded capital Messene; but after the capture of that city by the Achaeans in 182 BCE, Thuria, Pharae, and Abia joined the Achaean League as independent members. Thuria was annexed to Laconia by Augustus; but it was restored to Messenia by Tiberius.

Pellucidar is a fictional Hollow Earth invented by American writer Edgar Rice Burroughs for a series of action adventure stories. In a crossover event between Burroughs's series, there is a Tarzan story in which he travels into Pellucidar.

Edgar Rice Burroughs was an American fiction writer best known for his celebrated and prolific output in the adventure and science-fiction genres. Among the most notable of his creations are the jungle hero Tarzan, the heroic Mars adventurer John Carter and the fictional landmass within Earth known as Pellucidar. Burroughs' California ranch is now the center of the Tarzana neighborhood in Los Angeles. 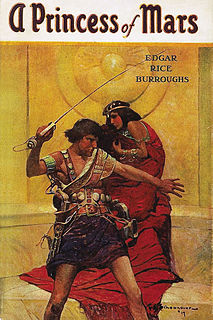 John Carter of Mars is a fictional Virginian—a veteran of the American Civil War—transported to Mars and the initial protagonist of Edgar Rice Burroughs' Barsoom stories. His character is enduring, having appeared in various media since his 1912 debut in a magazine serial. The 2012 feature film John Carter marked the 100th anniversary of the character's first appearance. 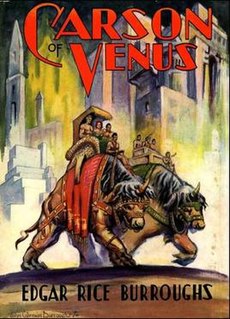 Carson of Venus is a science fantasy novel by American writer Edgar Rice Burroughs, the third book in the Venus series. Burroughs wrote the novel in July and August 1937. It was serialized in 1938 in six weekly installments from January 8 to February 12 in Argosy, the same publication where the previous two Venus novels appeared. It was published in book form a year later from Edgar Rice Burroughs, Inc. Burroughs originally submitted the novel to a number of the "slick" magazines: Liberty, The Saturday Evening Post, Collier's, and Ladies' Home Journal. All rejected the story. The Outlaw of Torn is a historical novel by Edgar Rice Burroughs, originally published as a five-part serial in New Story Magazine from January to May 1914, and first published in book form by A. C. McClurg in 1927. It was Burroughs' second novel, his first being the science fiction work A Princess of Mars. His third was Tarzan of the Apes.

Opar is a fictional lost city in the Tarzan novels of Edgar Rice Burroughs and later the Khokarsa novels of Philip José Farmer and Christopher Paul Carey and various derivative works in other media. The city first appeared in the second Tarzan novel, The Return of Tarzan (1913).

Tarzan Alive: A Definitive Biography of Lord Greystoke is a fictional biography by American author Philip José Farmer, that alleges the life of Edgar Rice Burroughs' character Tarzan, is a story of a real person. The book was first published in hardcover by Doubleday in 1972, with a paperback edition following from Popular Library in 1973 and a trade paperback edition from Bison Books in 2006. The first British edition was published by Panther in 1974.

Tantor is a generic name for elephants in Mangani, the fictional language of the great apes in the Tarzan novels of Edgar Rice Burroughs. In Burroughs's works a number of elephants appear under the name of Tantor, most notably one particular bull elephant the ape man befriends in his youth in the first Tarzan novel, Tarzan of the Apes.

Tarzan and the Foreign Legion is a novel by American writer Edgar Rice Burroughs, the twenty-second in his series of books about the title character Tarzan. The book, written June–September 1944 while Burroughs was living in Honolulu and published in 1947, was the last new work by Burroughs to be published during his life. The novel is set during World War II. The term "foreign legion" does not refer to the French Foreign Legion, but is the name given in the book to a small international force fighting the Japanese.

Tarzan: The Lost Adventure is a novel by American writer Joe R. Lansdale, based on an incomplete fragment of a Tarzan novel written by Edgar Rice Burroughs which had been left unfinished at his death. The book was serialized in four parts by Dark Horse Comics, before being published as a single volume in 1995. 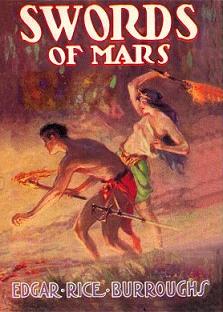 Pellucidar is a 1915 fantasy novel by American writer Edgar Rice Burroughs, the second in his series about the fictional "Hollow Earth" land of Pellucidar. It first appeared as a five-part serial in All-Story Weekly from May 1 to 29, 1915. It was first published in book form in hardcover by A. C. McClurg in September, 1923. A map by Burroughs of the Empire of Pellucidar accompanied both the magazine and book versions.

Land of Terror is a 1944 fantasy novel by American writer Edgar Rice Burroughs, the sixth in his series about the fictional "hollow earth" land of Pellucidar. It is the penultimate novel in the series and the last to be published during Burrough's lifetime. Unlike most of the other books in the Pellucidar series, this novel was never serially published in any magazine because it was rejected by all of Burroughs's usual publishers.

Thouria is a village and a former municipality in Messenia, Peloponnese, Greece. Since the 2011 local government reform it is part of the municipality Kalamata, of which it is a municipal unit. The municipal unit has an area of 76.922 km2. Its population in 2011 was 2,721. It takes its name from the ancient town of Thuria. 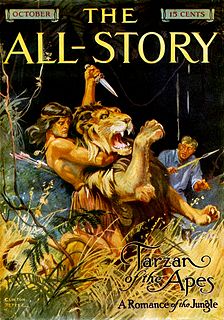 Tarzan is a fictional character, an archetypal feral child raised in the African jungle by the Mangani great apes; he later experiences civilization only to reject it and return to the wild as a heroic adventurer. Created by Edgar Rice Burroughs, Tarzan first appeared in the novel Tarzan of the Apes, and subsequently in 25 sequels, several authorized books by other authors, and innumerable works in other media, both authorized and unauthorized. The film version of Tarzan as the noble savage, as acted by Johnny Weissmuller, does not reflect the original character in the novels, who is gracious and highly sophisticated.

Messenia or Messinia was an ancient district of the southwestern Peloponnese more or less overlapping the modern Messenia region of Greece. To the north it had a border with Elis along the Neda river. From there the border with Arcadia ran along the tops of Mount Elaeum and Mount Nomia and then through foothills of Taygetus. The eastern border with Laconia went along the Taygetus ridge up to the Koskaraka river, and then along that river to the sea, near the city of Abia. 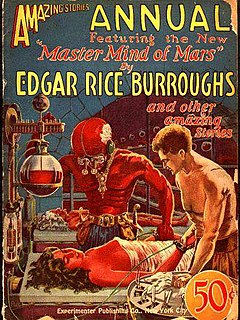 Ulysses Paxton is a fictional character created by Edgar Rice Burroughs in his novel The Master Mind of Mars. Within the narrative framework of the novel, Captain Paxton, United States Army Infantry, is a fan of Burroughs' Barsoom series, and after having a shell blow off his legs during trench warfare in World War I, he finds himself drawn across the gulfs of space to Mars like John Carter before him. He sends Burroughs a first person manuscript of his adventures on the dying planet, which Burroughs publishes.

Antheia was a town in ancient Messenia, mentioned in the Iliad by Homer, who gives it the epithet Βαθυγείμων. Homer says it was located in the high meadows between Pherae and Aipeia, and lists it as one of the towns with which Agamemnon wished to make atonement to Achilles. It was supposed by later writers to be the same as Thuria, though some identified it with Asine.

Aepeia or Aipeia was a town of ancient Messenia. It is mentioned by Homer in the Iliad as one of the seven Messenian towns, offered by Agamemnon to Achilles. It is supposed by Strabo to be the same as Thuria, and by Pausanias the same as Corone.