Last updated November 27, 2021
Icelandic witch
This is an Icelandic name. The last name is patronymic, not a family name; this person is referred to by the given name Thuridur.

Thuridur Olafsdottir (Icelandic: Þuríður Ólafsdóttir; died 1678) was an alleged Icelandic witch. She was executed for sorcery by burning together with her son Jon Tordarson. She was the only woman who is confirmed to have been executed for witchcraft on Iceland.

Thuridur Olafsdottir left Skagafjörður in Norðurland with her son Jon Tordarson for Vestfjord in 1677. In their new parish, her son boasted that his mother could walk on water, which gave them a rumor of sorcery. When the vicar's wife Helga Halldorsdottir in Selárdalur fell sick, they were suspected of having caused it by the use of magic. They were sentenced guilty as charged and executed by burning, as was the method of execution for witchcraft on Iceland.

The most detailed information about the case is from the Mælifellsannáll : "Þuríður Ólafsdóttir and her son Jon was burned in Vestfjord; they were accused of magic ( galdur ); the woman had lived in Skagafjörður (in Nordland) all her life and never dealt with galdur. As all paupers she had left for the West in the spring of 1677 with her son Jon, of whom little is known other than he neither had a rumor of having dealt with galdur. He allegedly claimed, that she had passed all the waterfalls in Nordland without horse nor boat, only by the help of galdur, and she must therefore have had knowledge in sorcery. People believed his lies and they were later arrested and burnt, something he did not believe would happen." [1] The Eyrarannáll chronicle noted: "two relations from Nordland, Þuríður and her son Jon Tordarson, were burned for having put illness upon Helga Halldorsdottir i Selardal". [2]

The case is somewhat unusual: of the 120 witch trials held on Iceland between 1625 and 1686, only ten were against women, [3] and though two women are traditionally considered to have been executed for this crime, the execution of Thuridur Olafsdottir is the only execution of witchcraft confirmed to have been performed.

Werewolf witch trials were witch trials combined with werewolf trials. Belief in werewolves developed parallel to the belief in European witches, in the course of the Late Middle Ages and the Early Modern period. Like the witchcraft trials as a whole, the trial of supposed werewolves emerged in what is now Switzerland during the Valais witch trials in the early 15th century and spread throughout Europe in the 16th, peaking in the 17th and subsiding by the 18th century. The persecution of werewolves and the associated folklore is an integral part of the "witch-hunt" phenomenon, albeit a marginal one, accusations of werewolfery being involved in only a small fraction of witchcraft trials.

The Põlula witch trials took place in the manor Põlula in Estonia in 1542. It centered around the noblewoman Anna Zoyge, who was accused by her husband Johann Meckes of having murdered her father-in-law with the assistance of five accomplices, who were all executed for witchcraft.

Klemus Bjarnason was the last person to have been condemned to death for witchcraft on Iceland. He was sentenced to death for sorcery in 1690. However, because of the law reform of 1686, which stipulated that all death sentences for witchcraft were to be confirmed by the high court of Copenhagen in Denmark, he was transferred there, where he died without the sentence being performed. 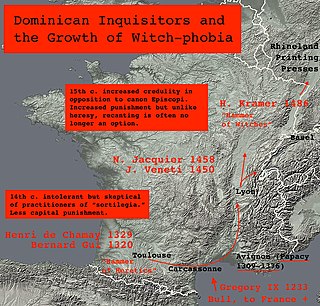 The Witch trials in Portugal were the perhaps fewest in all Europe. Similar to the Spanish Inquisition in neighboring Spain, the Portuguese Inquisition preferred to focus on the persecution of heresy and did not consider witchcraft to be a priority. In contrast to the Spanish Inquisition, however, the Portuguese Inquisition was much more efficient in preventing secular courts from conducting witch trials, and therefore almost managed to keep Portugal free from witch trials. Only seven people are known to have been executed for sorcery in Portugal.

The Witch trials in Denmark are poorly documented, with the exception of the region of Jylland in the 1609–1687 period. The most intense period in the Danish witchcraft persecutions was the great witch hunt of 1617-1625, when most exeuctions took place, which was affected by a new witchcraft act which was introduced in 1617.

The Witch trials in Iceland were conducted by the Danish authorities, who introduced the belief in witchcraft as well as the Danish Witchcraft Act in the 17th-century, and then stopped the persecutions. Similar to the case of Witch trials in Latvia and Estonia, the witch trials were introduced by a foreign elite power in an area with weak Christianity, in order to ensure religious conformity. Iceland was uncommon for Europe in that magic as such was viewed favorably on the island, and the majority of those executed were men, which it had in common with only the Witch trials in Finland.

Margrét Þórðardóttir, known in folklore under her sobriquet Galdra-Manga ('Sorcery-Manga'), was an Icelandic woman, known for being persecuted for witchcraft. She has been incorrectly referred to as one of only two women executed for sorcery in Iceland and is the subject of folktales.

The Witch trials in Norway belonged to the most intense of the Nordic countries. Norway was in a union with Denmark during this period, and the witch trials were conducted by instructions from Copenhagen.

The Witch trials in Finland were conducted in connection to Sweden and were relatively few with the exception of the 1660s and 1670s, when a big witch hunt affected both Finland and Sweden. Finland differed from most of Europe in that an uncommonly large part of the accused were men, which was it had in common with the witch trials in Iceland. Most of the people accused in Finland were men, so called "wise men" hired to perform magic by people. From 1674 to 1678, a real witch hysteria broke out in Ostrobothnia, during which twenty women and two men were executed.

The Witch trials in Hungary were conducted over a longer period of time than in most countries in Europe, as documented witch trials are noted as early as in the Middle Ages, earlier than common, and lasted until the late 18th-century, which was later than normal. During the 16th and 17th centuries Hungary was divided into three parts: Austrian Hungary, Ottoman Hungary and Transylvania, with some differences between them in regard to the witch hunt. The most intense period of witch hunt in Hungary took place in the 18th-century, at a time when they were rare in the rest of Europe except Poland, and finally stopped in 1768 by rule of Austria which controlled Hungary at the time.

The Witch trials in England were conducted from the 15th century until the 18th century. They are estimated to have resulted in the death of between 500 and 1000 people, 90 percent of whom were women. The witch hunt was as its most intense stage during the civil war and the Puritan era of the mid 17th century.

The Witch trials in the Italian states of present-day Italy is a complicated issue. Witch trials could be managed by a number of different secular courts as well as by the Inquisition, and documentation has been only partially preserved in either case. A further complication is the fact that Italy was politically split between a number of different states during the time period in which the witch trials occurred; and that historiography has traditionally separated the history of Northern and Southern Italy. All of these issues complicate the research of witch trials in present-day Italy, and the estimations of the intensity and number of executions has varied between hundreds to thousands of victims.

Beata Persdotter also known as Beata Pietarintytär and Beata Pitarintytär was a Finnish merchant daughter from Pedersöre in Österbotten. She was the last person in Finland to be sentenced to death for sorcery, though the sentence was never carried out.

Luís de la Penha, was a Portuguese occultist who was executed for sorcery by the Portuguese Inquisition for having called upon Satan.

The Kastelholm witch trials, which took place in Kastelholm on Åland between 1665 and 1668, were the biggest witch trial in the history of Finland. It was also almost unique in its character for Finland, where witch trials were normally small, with a single and often male defendant accused of sorcery. In contrast, the Kastelholm witch trials were a mass trial where several women were accused of attending a witches' Sabbath and making a pact with the Devil in the manner of contemporary continental witchcraft demonology, and in both instances it was almost unique for Finland, where only the Österbotten witch trials of 1674-1678 were similar to it. It resulted in the execution of six women.