Thurleigh is a village and civil parish in north Bedfordshire, England.

Excavations have shown evidence the locality was occupied in the Iron-Age, Roman and Saxon periods. [3]

In Domesday of 1086 the Middle English orthography as to both modern 'th' digraph sounds was often in different forms particularly as to this county — the place is LaLega. By 1372 it is Thyrleye. [4] In 1813, Thurleigh, or Thurley, is recorded as being in the Hundred of Willey and the Deanery of Eaton. [5] The scribes were particularly ecclesiastical for the county as Lega is a very Latin-esque form of leigh. [6] The latter is a very common word, rarely used today for meadow or clearing (lea) almost certainly an Anglo-Saxon word perhaps preceded by the definite article, as early written in unrelated prose þǣre lēa. Being in the Danelaw however a link to Thor cannot be ruled out.

There was a church here in Saxon times. The current church has some parts still dating from around 1150, and at about that same time a castle was built here. [7]

In 1941, during World War II, an airfield known as RAF Thurleigh was constructed on a plateau just north of the village for RAF Bomber Command. It was used initially for training both RAF and Polish personnel, but in 1942 was turned over to the USAAF and four squadrons of B-17 Flying Fortresses moved in, and over the next three years flew 341 bombing missions. A memorial to these men stands in the village. [9] Events and characters from the USAAF's time at Thurleigh were used as the basis of the novel and film Twelve O'Clock High . [10]

After the war the airfield was used by the Royal Aeronautical Establishment for research and development work. The runway was extended, necessitating the closure of the road between Thurleigh and Keysoe, and the demolition of the hamlet of Backnoe End. [7]

In 1968–71 the Commission for the Third London Airport (the "Roskill Commission") considered Thurleigh as one of its four short-listed sites, along with Cublington, Foulness (later known as Maplin Sands) and Nuthampstead. [11]

The RAE was largely closed down in the 1990s and the site is now used by various commercial enterprises.

Thurleigh is about 6 miles (10 km) north of the county town of Bedford. As well as the village centre, the parish is spread across five "Ends", local parlance for a hamlet – Church End, Cross End, Scald End, Backnoe End and Park End, covering an area of about six square miles. [12] The land is undulating boulder clay, ranging in height from 200 ft. to 275 ft. above sea level. A stream runs through the Parish to the south forming a valley which cuts through to the underlying Oxford Clay. The countryside around is in the main used for arable farming. [13] A former airfield to the north of the village is now a business park and motor sports track. There are only minor roads in the parish, though the A6 and B660 are just a few miles away. These roads however are used as a rat run and a 2007 survey recorded 600 vehicles per hour on Mill Road during the morning and evening rush hours, and 121 HGVs throughout the day. [7]

Part of the site of the former airfield now accommodates Thurleigh Business Park, and the runway is currently used for storage of cars. Another part of the site is used by Bedford Autodrome, a corporate hospitality centre. This includes Thurleigh Museum which is dedicated primarily to the airfield and life in the area during World War 2. Other major employers include Jackson Demolition, Monster Events, Star Hire and a number of agricultural businesses. [7]

Regular events are held at the Village Hall, the Church, the Playing Field Club and the parish's only pub, the Jackal. There has been a hall in the village since 1927, and the current building dates from the 1980s. A youth club meets there bi-monthly. The playing field is used for cricket and football, and has a small children's play area. It is a registered charity. The Playing Field Club, built in the 1970s, provides changing rooms for the cricket team, which is the only organised sports team in the village. There are about 30 miles (48 km) of footpaths and bridleways within the parish. [7] There are a few bus services that stop in the village. [17]

Thurleigh Primary School and Pre-School takes children aged between 2½ and 11 years old, and Breakfast Club and After-School extends the hours of care for the children of working parents. [7] Older children are served by Sharnbrook Academy. [18]

The Parish Church of Saint Peter is a grade II* listed building dating from approximately 1130, with 14th- and 15th-century additions and restored in the 1880s. [19] The former vicarage was finished in 1750 for vicar Robert Lerogne. [20] Other listed buildings include a windmill tower, built c.1890, [21] and dwellings dating mainly from the 17th,18th and 19th centuries. [22] The Baptist Chapel was built in 1888 on the same site as an earlier building. [23] Thurleigh Castle was a medieval timber, motte-and-bailey, castle, but only earthworks survive today. In addition to the USAAF memorial previously mentioned, there is a War Memorial near the church to the men of the village who gave their lives in two world wars. [7] Part of the village is a conservation area. [24]

Campton is a village in the Central Bedfordshire district of Bedfordshire, England. It is part of the civil parish of Campton and Chicksands with the nearby Chicksands. It is about 9 miles (14 km) south of Bedford, and is about 9 miles (14 km) north-west from Letchworth and sits on a tributary of the River Ivel. It is just to the west of Shefford. The 13th century Church of All Saints is in the centre of the village.

Wootton is a large village and civil parish located to the south-west of Bedford, in the north of Bedfordshire, England. The parish also includes the hamlets of Hall End, Keeley Green and Wootton Green.

Polebrook is a village in Northamptonshire, England. The population at the 2011 census was 478.

Bletsoe is a village and civil parish in Bedfordshire, England. It is on the A6, and about eight miles north of Bedford. The village has a small park, the former site of Bletsoe Castle and a church. Nearby places are Sharnbrook, Milton Ernest, Riseley, Thurleigh, Odell, Souldrop, and Swineshead. The nearest town to Bletsoe is Bedford.

Milton Ernest is a village and civil parish in Bedfordshire, England, about 5 miles (8.0 km) north of Bedford itself. It had a population of 754 in 2001. This had risen to 761 according to the 2011 census. The village is situated on the east bank of the River Great Ouse, and is the site of Milton Ernest Hall, which was used as the United States Eighth Air Force's support command headquarters in the Second World War.

Kempston Rural is a civil parish in the Borough of Bedford in Bedfordshire, England.

Pavenham is a small village and civil parish on the River Great Ouse in the Borough of Bedford in Bedfordshire, England, about 6 miles (10 km) north-west of Bedford. Village amenities consist of St Peter's Church, a pub, Village hall, tennis Club, Cricket Club and golf club. The village is home to many clubs and societies including an active WI.

Barton-le-Clay is a large village and a civil parish in Bedfordshire, England, having a border with Hertfordshire. The village has existed since at least 1066 and is mentioned in the Domesday Book.

Bolnhurst is a small village in the civil parish of Bolnhurst and Keysoe, in the Borough of Bedford in Bedfordshire. The village is about 7 miles (11 km) north-northeast of Bedford and about 6 miles (10 km) west of St Neots. 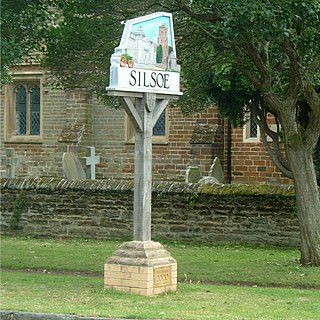 Silsoe is a village and civil parish in Bedfordshire, England. The village used to be on the main A6 road but a bypass around the village was opened in 1981 at a cost of £1.6m.

Swineshead is a village and civil parish in the Borough of Bedford in the county of Bedfordshire, England.

Pulloxhill is a small village and civil parish in Bedfordshire, England 342 ft above sea level with a population of 850 at the 2001 Census, increasing to 985 at the 2011 Census.

Podington is a village and civil parish in Bedfordshire, England, United Kingdom. The village is within the electoral ward of Harrold in the Borough of Bedford. Podington lies around 16 km (9.9 mi) northwest of Bedford and is about 2 km (1.2 mi) east of the county border with Northamptonshire. Nearby there is paintballing and Podington Wyevale Garden Centre can be found in the High Street.

Riseley is a village and civil parish located in North Bedfordshire, England. The village name has had alternative spellings in the past such as Rislau, Riseleg, Riselai and Risely, however all these spellings are considered archaic. It has a population of 1,284 according to the 2001 census, increasing to 1,286 at the 2011 Census, and is near the villages of Bletsoe, Sharnbrook, Swineshead, Pertenhall, Keysoe, Thurleigh and Melchbourne. The nearest town to Riseley is Rushden in the neighbouring county of Northamptonshire, approximately 8 miles away to the north west. The county town of Bedford is approximately 9 miles to the South of Riseley. The village has one watercourse, which is a tributary of the River Ouse, flowing through it known locally as the 'Brook' around which in medieval times the village was built. 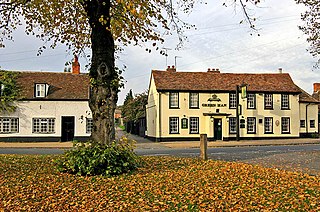 Clophill is a village and civil parish clustered on the north bank of the Flit, Bedfordshire, England. It is recorded in the Domesday Book of 1086 as Clopelle. "Clop", ostensibly surviving the Great Vowel Shift, likely means tree-stump in Old English. However, it also has cognate terms for clay, with which the soil of mid Bedfordshire is rich. 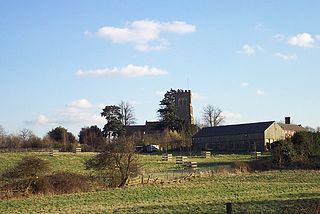 Husborne Crawley is a small village and civil parish in Bedfordshire, England, located close to Junction 13 of the M1 motorway. The village touches the borders of the Woburn Abbey estate on one side, and the village of Aspley Guise on the other. The meaning of the Husborne element of the towns name is "warrior stream" and the Crawley element means "crow clearing". It appears as Hussheburn Crawele, in 1421.

Little Staughton is a small village and civil parish located in the north of Bedfordshire. The parish church, All Saints, is set apart from the present village – the previous village having been abandoned following an outbreak of the Bubonic plague.

The Hundred of Stodden is a historical land division, a hundred, in the north of Bedfordshire, England. It borders Northamptonshire to the north, Huntingdonshire to the east and the Bedfordshire hundreds of Willey and Barford to the south. Three vills - Oakley, Clapham and Milton Earnest - are separated from the rest of the hundred by the parishes of Beltsoe and Thurleigh, which are part of the half-hundred of Buckelow and hundred of Willey respectively.