There are private communal gardens in the centre of the square for use by the local residents. The Victoria and Albert Museum is close by to the north across Thurloe Place and Cromwell Gardens. The nearest tube station is South Kensington to the west along Thurloe Street.

The square (and the adjacent streets) are named after John Thurloe, an advisor of Oliver Cromwell, who owned the land in the 17th century. His descendant, Harris Brace, had a godson called John Alexander, who developed the area in the 1820s. George Basevi designed most of the houses. [1]

Sir Henry Cole (1808–1892), the first director of the Victoria and Albert Museum, lived at 33 Thurloe Square just opposite the museum. The building is marked with a blue plaque and is now the Kazakhstan Embassy.

The house at 5 Thurloe Square is very narrow, wedge-shaped, and only six feet wide at one end. [2]

The Yalta Memorial Garden, which contains a memorial to those repatriated as a result of the Yalta Conference following World War II, Twelve Responses to Tragedy , is situated at the north of the square between the square and the Cromwell Road. [4]

Kensington is an affluent district in the Royal Borough of Kensington and Chelsea in the West of Central London.

John Thurloe was an English politician who served as secretary to the council of state in Protectorate England and spymaster for Oliver Cromwell. He was from Great Milton in Oxfordshire and of Lincoln's Inn,

Earl's Court is a district of Kensington in the Royal Borough of Kensington and Chelsea in West London, bordering the rail tracks of the West London line and District line that separate it from the ancient borough of Fulham to the west, the sub-districts of South Kensington to the east, Chelsea to the south and Kensington to the northeast. It lent its name to the now defunct eponymous pleasure grounds opened in 1887 followed by the pre–World War II Earls Court Exhibition Centre, as one of the country's largest indoor arenas and a popular concert venue, until its closure in 2014. The area has long been known as "Bedsitter Land" with many of its stuccoed terraces converted into studio flats, hotels and hostels. 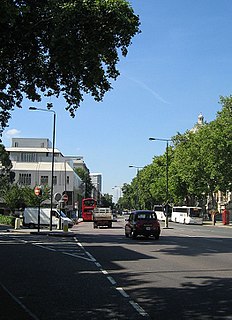 Cromwell Road is a major London road in the Royal Borough of Kensington and Chelsea, designated as part of the A4. It was created in the 19th century and is said to be named after Richard Cromwell, son of Oliver Cromwell, who once owned a house there. 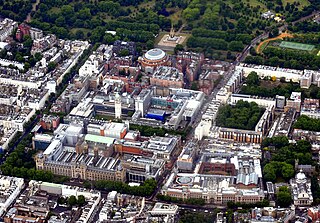 Albertopolis is the nickname given to the area centred on Exhibition Road in London, named after Prince Albert, consort of Queen Victoria. It contains many educational and cultural sites. It is in South Kensington, split between the Royal Borough of Kensington and Chelsea and the City of Westminster, and the area bordered by Cromwell Road to the south and Kensington Road to the north. 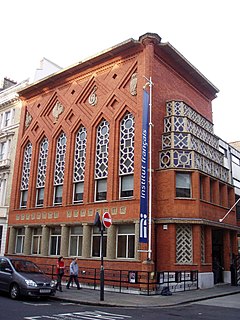 South Kensington is a district just west of Central London in the Royal Borough of Kensington and Chelsea. Historically it settled on part of the scattered Middlesex village of Brompton. Its name was supplanted with the advent of the railways in the late 19th century and the opening and naming of local tube stations. The area is known as a popular tourist destination owing to the density of museums and cultural landmarks. Adjacent affluent centres such as Knightsbridge, Chelsea and Kensington, have been considered as some of the most exclusive real estate in the world. Since the First World War it has become a cosmopolitan area attracting Belgian and French refugees, but also Poles during the Second World War and after, and latterly Spanish, Italian, American, and Middle-Eastern expatriates. The French presence is emphasised by the Lycée Français Charles de Gaulle, the French Institute, hosting the Ciné Lumière a window on French cinema and the Alliance française and the French consulate, among other diplomatic residences. With a French bookshop and many international cafés in the area, it has been called Paris’s 21st arrondissement.

The Royal Borough of Kensington and Chelsea, an Inner London borough, has responsibility for some of the parks and open spaces within its boundaries. Most of them are relatively small: many are the typical London square, built to service the houses around that square. Two of the larger open spaces both form part of the "Magnificent Seven" cemeteries, being those at Brompton and Kensal Green. The parks are policed by the Royal Borough of Kensington and Chelsea Parks Police.

Brompton, sometimes called Old Brompton, survives in name as a ward in the Royal Borough of Kensington and Chelsea in London. Until the latter half of the 19th century it was a scattered village made up mostly of market gardens in the county of Middlesex. It lay south-east of the village of Kensington, abutting the parish of St Margaret's, Westminster at the hamlet of Knightsbridge to the north-east, with Little Chelsea to the south. It was bisected by the Fulham Turnpike, the main road westward out of London to the ancient parish of Fulham and on to Putney and Surrey. It saw its first parish church, Holy Trinity Brompton, only in 1829. Today the village has been comprehensively eclipsed by segmentation due principally to railway development culminating in London Underground lines, and its imposition of station names, including Knightsbridge, South Kensington and Gloucester Road as the names of stops during accelerated urbanisation, but lacking any cogent reference to local history and usage or distinctions from neighbouring settlements. 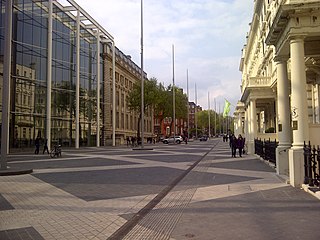 Exhibition Road is a street in South Kensington, London which is home to several major museums and academic establishments, including the Victoria and Albert Museum, the Science Museum and the Natural History Museum.

Cromwell Gardens is a short but major road in South Kensington, within the Royal Borough of Kensington and Chelsea, London, England. It joins the Cromwell Road at the junction with Exhibition Road to the west with the Brompton Road to the east. 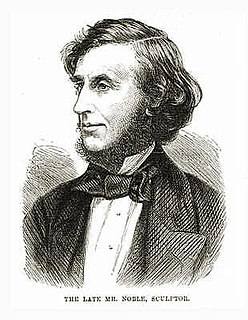 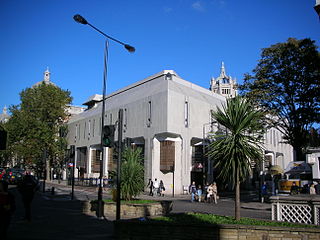 The Ismaili Centre, London is one of six such centres world-wide. Established in South Kensington more than thirty years ago, it is a religious, social and cultural meeting place for the Ismaili Muslim community in the United Kingdom and is the first such centre to be specially designed and built for Ismailis in the Western world.

Angela Conner FRBS is an English sculptor who works in London. Conner has exhibited internationally and has large scale sculptures in public and private collections around the world.

The Embassy of France in London is the diplomatic mission of France to the United Kingdom. Located just off Knightsbridge at Albert Gate, one of the entrances to Hyde Park, it is situated immediately opposite the Embassy of Kuwait. 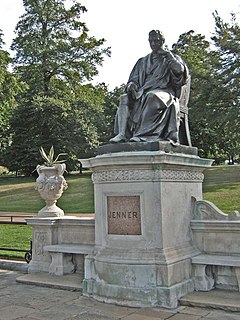 A statue of Edward Jenner, the physician, scientist and pioneer of the world's first vaccine, is located in Kensington Gardens in London. A work of the sculptor William Calder Marshall, the bronze was originally unveiled by Albert, Prince Consort in Trafalgar Square on 17 May 1858, before being moved to its present location in 1862. It is a Grade II listed building. 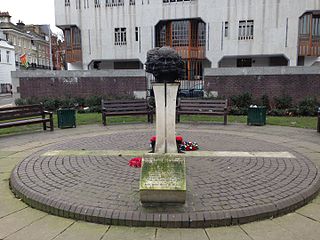 Twelve Responses to Tragedy, or the Yalta Memorial, is a memorial located in the Yalta Memorial Garden on Cromwell Road in South Kensington in west London. The memorial commemorates people displaced as a result of the Yalta Conference at the conclusion of the Second World War. Created by the British sculptor Angela Conner, the work consists of twelve bronze busts atop a stone base. The memorial was dedicated in 1986 to replace a previous memorial from 1982 that had been repeatedly damaged by vandalism. 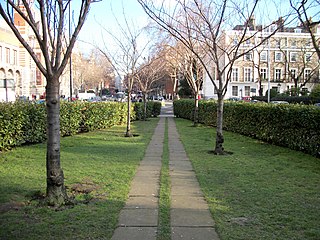 The Yalta Memorial Garden is a small triangular garden in South Kensington, west London, SW7. It is 0.0417 hectares in size. The garden contains Twelve Responses to Tragedy, a memorial located that commemorates people displaced as a result of the Yalta Conference at the conclusion of World War II. The memorial was dedicated in 1986 to replace a previous memorial dedicated in 1982 that had been repeatedly damaged by vandalism.