Thurlow Weed Lieurance (March 21, 1878 – October 9, 1963) was an American composer, known primarily for his song "By the Waters of Minnetonka". He is frequently categorized with a number of his contemporaries, including Charles Wakefield Cadman, Arthur Nevin, Charles Sanford Skilton, Preston Ware Orem, and Arthur Farwell, as a member of the Indianist movement in American music. [1]

Lieurance was born in Oskaloosa, Iowa, but his family relocated to Kansas when he was very young. Little is recorded about his early education; it is known that his father encouraged him to be a pharmacist, but that he preferred instead to follow a career in music. [2] Upon the outbreak of the Spanish–American War he enlisted as a musician. With the cessation of hostilities, he moved to Ohio and enrolled in the Cincinnati College of Music, studying there until his savings from military service ran out. He was able to continue studying with Herman Bellstedt, a cornetist and bandmaster under John Philip Sousa. [3] During his time at the Cincinnati College of Music, he studied theory, orchestration, harmony and arranging. In 1900 he sang with the chorus of Castle Square Garden Opera Company to learn of opera and its production. Around 1905, Lieurance joined the Chautauqua Society, working in traveling tent schools teaching music to American Indians. The contacts he made through this position led to an interest in Indian culture; he began to try to transcribe the songs that he heard, and began to teach himself the craft of making traditional Native American flutes. [4] At about this time polio left Lieurance disabled; though he had very little use of his legs he was quite vigorous and mobile. [5]

Around 1909, Lieurance acquired a portable cylinder recording device from Edison Records, and carried it with him whenever he went to visit Indian performers. In October 1911 he recorded a Crow (Apsalooke) (maybe Oglala Lakota Sioux) singer, Sitting Eagle, also known as Mortimer Dreamer, then living on the Crow Reservation in Montana. From this recording he took the melody for his song "By the Waters of the Minnetonka". [4] He set it to a harp-like accompaniment, [1] and it was published by Theodore Presser in 1913 as "an Indian love song" with words by J. M. Cavanass, becoming an instant success and going through several editions; it was also frequently recorded in the years before 1950. [5]

The early editions of the published arrangements in 1915, 1917, and 1921 called for a violin or flute to echo the vocal melody, playing either a provided melody or ad lib. Possibly because of this, the melody is often played on the Native American flute. [6] The performance notes from Lieurance's 1921 edition suggest: [7]

A violin typifies the wind, if you choose, echoes the soft harmonies of the accompaniment which rocks to and fro on harp chords, between the major key and its relative minor, in and out of that singular domain musicians know as the “added Sixth” chord and its derivatives.

A typewritten note found among the composer's papers describes the legend behind the song:

Moon Deer, daughter of the Moon Clan, loved Sun Deer of the Sun Clan. Tribal law forbade marriage between the two clans. It was decreed that daughters of the Moon Clan must marry into the Eagle Clan. The two lovers, in tears, ran away far to the east and north. They came to a beautiful lake called Minnetonka (Minne means water; Tonka means large and round). Their happiness was disturbed because their traditional enemies, the Chippewa, lived on the north shore of this lake. They feared to return home and be separated, and finally in desperation they decided to end it all. The legend states that they disappeared beneath the waves and were no more. The waves moaned a rhythmic sound and the pines crooned their love song. Many moons afterwards the warriors of the Sioux drove the Chippewa north to Lake Superior. One night while they were camped on the shores of Lake Minnetonka, they heard the waters singing a weird melody and, in the moon-path on the waters, two lilies appeared and grew to the skies. The lilies were the spirits of Moon Deer and Sun Deer. [5]

Lieurance himself recognized how important to his career the song had been, later saying:

That night marked an epoch in my life, opened to me a new world. What work I have since done has been due chiefly to that song. Thousands of people have heard it, clothed with the harmonizing which our ears demand; it is lying upon music Tables all over the land, has been sung by many of the world's famous singers, including Schuman-Heink, Julia Culp and Alice Nielson. [5]

Lieurance married, in 1917, Edna Woolley, and she took part in his recital tours thereafter. She would wear an Indian costume and play the part of "Princess Watahwaso  [ de ]". Such was the success of these recitals that Lieurance was able to return to school in Cincinnati, finally gaining his degree there in 1924. The couple retired from concertizing in 1926 and settled into teaching positions, working briefly at the University of Nebraska [2] before coming to the University of Wichita. Lieurance eventually became the school's Dean of Fine Arts. The couple retired from the university in 1945. [4]

Lieurance and his wife were invited by Theodore Presser to travel to Europe in the early 1930s. Upon their return, the composer was given support for his research into Native American music when he received a grant from the Scientific Research Society of America. Later in the decade, he helped to found the Minisa Symphony Orchestra in Wichita; most of his orchestral music was written for this group. Upon retirement, Lieurance and his wife moved to Neosho Falls, Kansas. Their house there was destroyed by flood in 1952, and the couple moved to Boulder, Colorado, where Lieurance died in 1963. Today the couple's papers may be found in the music library of Wichita State University, which has been named for the composer. [4] Much of Lieurance's research collection is housed in the Smithsonian Institution. [8]

Apart from "By the Waters of Minnetonka", Lieurance wrote over 300 works, his first composition was entitled "A Prayer". Included in his works were a number of orchestral pieces, with titles such as Trails Southwest, The Conquistadors, and Sad Moon on Falling Leaf. Much of the rest of his output consisted of songs and works for choir, but he also composed an opera, The Drama of Yellowstone. [4] 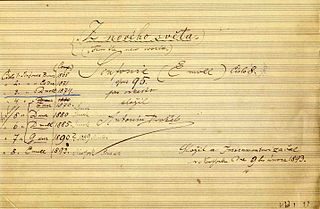 The Symphony No. 9 in E minor, "From the New World", Op. 95, B. 178, popularly known as the New World Symphony, was composed by Antonín Dvořák in 1893 while he was the director of the National Conservatory of Music of America from 1892 to 1895. It premiered in New York City on 16 December 1893. It is one of the most popular of all symphonies. In older literature and recordings, this symphony was – as for its first publication – numbered as Symphony No. 5. Astronaut Neil Armstrong took a tape recording of the New World Symphony along during the Apollo 11 mission, the first Moon landing, in 1969. The symphony was completed in the building that now houses the Bily Clocks Museum in Spillville, Iowa.

The Ojibwe, Ojibwa, Chippewa, or Saulteaux are an Anishinaabe people in what is currently southern Canada, the northern Midwestern United States, and Northern Plains. They are Indigenous peoples of the Subarctic and Northeastern Woodlands.

Indigenous music of Canada encompasses a wide variety of musical genres created by Aboriginal Canadians. Before European settlers came to what is now Canada, the region was occupied by many First Nations, including the West Coast Salish and Haida, the centrally located Iroquois, Blackfoot and Huron, the Dene to the North, and the Innu and Mi'kmaq in the East and the Cree in the North. Each of the indigenous communities had their own unique musical traditions. Chanting – singing is widely popular and most use a variety of musical instruments.

Lake Minnetonka is a lake located about 16 miles (26 km) west-southwest of Minneapolis, Minnesota. Lake Minnetonka has about 23 named bays and areas. The lake lies within Hennepin and Carver counties and is surrounded by 13 incorporated municipalities. At 14,528 acres (5,879 ha), it is Minnesota's ninth largest lake. It is a popular spot for local boaters, sailors, and fishermen.

Henry Thacker ("Harry") Burleigh was an American classical composer, arranger, and professional singer known for his baritone voice. The first black composer who was instrumental in developing characteristically American music, Burleigh made black music available to classically trained artists both by introducing them to spirituals and by arranging spirituals in a more classical form. Burleigh also introduced Antonín Dvořák to Black American music, which influenced some of Dvořák's most famous compositions and led him to say that Black music would be the basis of an American classical music.

Jerod Impichchaachaaha' Tate is a Chickasaw classical composer and pianist. His compositions are inspired by North American Indian history, culture and ethos.

Raymond Carlos Nakai is a Native American flutist of Navajo and Ute heritage. Nakai played brass instruments in high school and college, and auditioned for the Armed Forces School of Music after a two-year period in the United States Navy. He began playing a traditional Native American cedar flute after an accident left him unable to play the trumpet. Largely self-taught, he released his first album Changes in 1983, and afterward signed a contract with Canyon Records, who produced more than thirty of his albums in subsequent years. His music prominently features original compositions for the flute inspired by traditional Native American melodies. Nakai has collaborated with musicians William Eaton, Peter Kater, Philip Glass, Nawang Khechog, Paul Horn, and Keola Beamer. He has received 11 Grammy Award nominations for his albums. 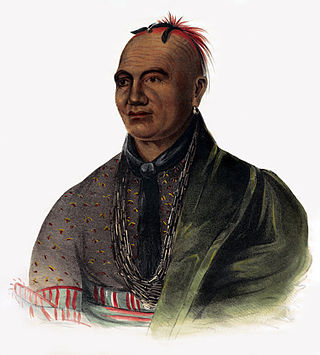 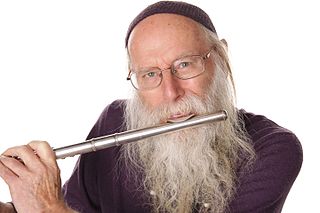 Dean Evenson is a new-age musician, composer, producer and videographer. His hometown is Staten Island, New York. He has a master's degree in Molecular Biology. He worked in Manhattan as a recording engineer for Regent Sound with many Atlantic recording artists including Eric Clapton, Mose Allison, Roberta Flack. Dean plays several instruments including the Western concert flute, Native American flute, synthesizer, and keyboards. In the New Age genre, his music is generally sounds of nature combined with flute melodies and other instruments for ambient and meditative purposes. His music is often used for massage, meditation, yoga and relaxation.

Yaqui music is the music of the Yaqui tribe and people of Arizona and Sonora. Their most famous music are the deer songs which accompany the deer dance. They are often noted for their mixture of Native American and Catholic religious thought.

Natalie Curtis, later Natalie Curtis Burlin was an American ethnomusicologist. Curtis, along with Alice Cunningham Fletcher and Frances Densmore, was one of a small group of women doing important ethnological studies in North America at the beginning of the 20th century. She is remembered for her transcriptions and publication of traditional music of Native American tribes as well as for having published a four-volume collection of African-American music. Her career was cut short by her accidental death in 1921.

Charles Sanford Skilton was an American composer, teacher and musicologist. Along with Charles Wakefield Cadman, Blair Fairchild, Arthur Nevin, and Arthur Farwell, among others, he was one of the leading Indianist composers of the early twentieth century.

Carl Busch was a Danish-born American composer and music teacher sometimes associated with the Indianist movement. He was an important figure in the musical life of Kansas City, Missouri for many years.

The Indianist movement was a movement in American classical music that flourished from the 1880s through the 1920s. It was based on attempts by classical composers to incorporate American Indian musical ideas with some of the basic principles of Western music, with the goal of creating a new, truly American national music.

Preston Ware Orem was an American composer, pianist, and writer on music. He is frequently grouped with other composers as part of the Indianist movement in American music. 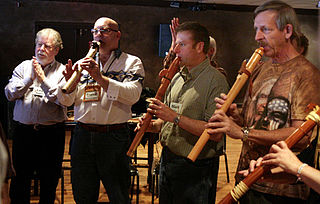 The 1933 Haskell Indians football team was an American football that represented the Haskell Institute—now known as Haskell Indian Nations University—as an independent during the 1933 college football season. Haskell compiled a record of 2–6–3.