Thurmond House may refer to:

The Thurmond House is a historic house at 407 Britt in Siloam Springs, Arkansas. It is an American Foursquare wood frame house, 2-1/2 stories in height with a wide hip roof. It is finished in novelty siding, with distinctive corner boards topped by capitals. A single-story porch, with a concrete base and piers, extends across the width of the front facade. The second level has a small central window flanked by trios of narrow one-over-one sash; there is a hip-roof dormer in the roof. Built c. 1910, the house is typical of many Foursquare houses built around that time, but is set off by its porch and corner boards.

The Thurmond House, on Louisiana Highway 154 near Gibsland in Bienville Parish, Louisiana, was built in the 1850s. It was listed on the National Register of Historic Places in 1980.

Whitehall is a street in central London.

This is a list of properties and historic districts in Arkansas that are listed on the National Register of Historic Places. There are more than 2,600 listings in the state, including at least 8 listings in each of Arkansas's 75 counties.

The Louisiana Purchase Historic State Park commemorates the initial point from which the lands acquired through the Louisiana Purchase (1803) were subsequently surveyed. The protected area encompasses 37.5 acres (15.2 ha) of forested wetlands, a landform which is regionally in decline due to agricultural development practices that include draining such areas. In the center of the park is a 6-foot (1.8 m) marker erected in 1926 on the survey point by the L'Anguille Chapter of the Daughters of the American Revolution. The site was listed on the National Register of Historic Places (1972) and designated as a National Historic Landmark (1993).

Blackton is an unincorporated community in Monroe County, Arkansas, United States. According to The Encyclopedia of Arkansas History and Culture, "little remains of the town." Two nationally registered historic sites are located in or near Blackton. The Palmer House is a brick home built in 1873 located near Blackton that has been listed on the National Register of Historic Places. The location where the survey of lands acquired in the Louisiana Purchase is located two miles outside of Blackton, now known as Louisiana Purchase State Park, and has been listed as a National Historic Landmark. 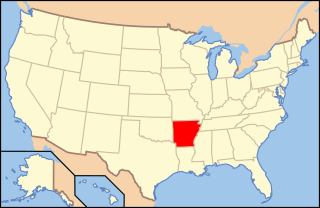 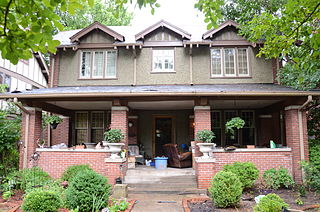 The Farrell Houses are a group of four houses on South Louisiana Street in Little Rock, Arkansas. All four houses are architecturally significant Bungalow/Craftsman buildings designed by the noted Arkansas architect Charles L. Thompson as rental properties for A.E. Farrell, a local businessman, and built in 1914. All were individually listed on the National Register of Historic Places for their association with Thompson. All four are also contributing properties to the Governor's Mansion Historic District, to which they were added in a 1988 enlargement of the district boundaries.

The Governor's Mansion Historic District is a historic district covering a large historic neighborhood of Little Rock, Arkansas. It was listed on the National Register of Historic Places in 1978 and its borders were increased in 1988 and again in 2002. The district is notable for the large number of well-preserved late 19th and early 20th-century houses, and includes a major cross-section of residential architecture designed by the noted Little Rock architect Charles L. Thompson. It is the oldest city neighborhood to retain its residential character.

Ethridge House may refer to:

Steamboat House may refer to:

The Dean House is a historic house off U.S. Route 165 in Portland, Arkansas. The 1.5 story house was designed by architect Charles L. Thompson and built c. 1910. Stylistically, it is a Louisiana Raised Cottage, a simple rectangular shape mounted in a foundation with brick piers. The roof extends over a wraparound porch, which is supported by Tuscan columns. The roof is pierced by a pair of gabled dormers that are decorated with fish-scale shingles.

The Old Alexander House is a historic house in rural Columbia County, Arkansas. Built in 1855 by Samuel Alexander, this single-story dogtrot house is one of the oldest buildings in the county, and one of its few surviving antebellum structures. It is located on what was once the main road between Camden, Arkansas and Shreveport, Louisiana, northeast of Magnolia. The house remains in the ownership of the Alexander family, who use it as a family museum. 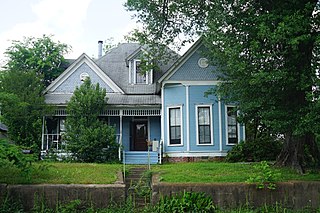 The Ward-Jackson House is a historic house at 122 North Louisiana Street in Hope, Arkansas. The 1-1/2 story wood frame house was built sometime in the 1890s, and is a particularly fine local example of Folk Victorian architecture. It has a busy exterior typical of Queen Anne styling, including different types of cut shingles, and has a porch with turned-spindle balustrade, and an Eastlake-style frieze. The windows are long and narrow, giving the house a somewhat Gothic appearance.

The Elms is a historic plantation house in rural Jefferson County, Arkansas. Located a short way south of Altheimer, it is a 1-1/2 story raised Louisiana cottage, an architectural form that is extremely rare in Arkansas. It is a 1-1/2 story wood frame structure, set on a raised basement. A porch extends across the front, with jigsawn balustrade, and the main roof is pierced by three gabled dormers. The house was built in 1866 by Dr. Samuel Jordon Jones. It is presently used as a hunting lodge.

The Hornibrook House is a historic house at 2120 South Louisiana Street in Little Rock, Arkansas. It is a two-story brick structure, with the irregular massing and projecting gables typical of the Queen Anne Victorian style. Its wraparound porch is festooned with detailed woodwork, with turned posts and balustrade. A three-story rounded turret stands at one corner of the house, topped by an octagonal roof. Built in 1888, it is one of the state's finest examples of Queen Anne architecture, with unrivalled exterior and interior detail. It was built for James Hornibrook, a prominent local businessman.

The Mehaffey House is a historic house at 2102 South Louisiana Street in Little Rock, Arkansas. It is a two-story wood frame structure, with a hip roof and weatherboard siding. It has irregular massing characteristic of the late Victorian period, but has a classical Colonial Revival porch, with Tuscan columns supporting a dentillated and modillioned roof. The main entrance features a revival arched transom. The house was built about 1905 to a design by noted Arkansas architect Charles L. Thompson.