Thurn's Specialty Meats or Thurn's is a smokehouse found in Columbus, Ohio. It was founded in 1886 and has continues to operate using the same methods and recipes for 134 years.

Alois ‘Grospop’ Thurn, an immigrant from southern Germany started Thurn's in 1886 after seeing that there were no such smoke houses in the area, an area where there with many German immigrants at the time. He began by selling his product door to door in Columbus's Brewery District. [3] [4] [5]

Robert Thurn and his two brothers sold the store to Albert Thurn in 1988. [2] [6] Albert's ownership marks the 4th generation of Thurn to own the store. [1] Albert, his brother Anton, his son Alec and sister Teresa all work at the store. [2] His father Robert Thurn died in February 2014. [7]

On November 2, 1992, Thurn's made the front page of the Columbus Dispatch when Presidential candidate Bill Clinton visited Thurn's while on the campaign trail. [8]

New York magazine and Time magazine food columnist Josh Ozersky hosted a sampling of his favorite meats from Thurn's. The sampling was held on September 10, 2011 at Thurn's. [9]

Thurn's uses the same recipes and methods used by the store approximately 100 years ago and all of their meats come from suppliers in Ohio. [1] [4] [10]

Thurn's was the first supplier of cottage ham in Columbus. [4]

Currently, Thurn's is open to the public three days a week. They usually sell until they run out of product. [10] [15]

The smoke house uses a pit fired smoker with steam radiators that reach temperature of approximately 210 degrees Fahrenheit. [4] Thurn's uses red oak and mulberry in their smoker. [4] Much of the process equipment used at Thurn's dates back as far as the 1930s. [10] 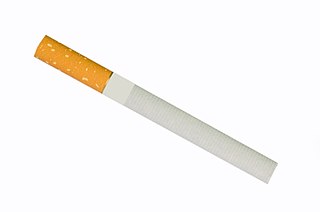 A cigarette is a narrow cylinder containing psychoactive material, typically tobacco, that is rolled into thin paper for smoking. Most cigarettes contain a "reconstituted tobacco" product known as "sheet", which consists of "recycled [tobacco] stems, stalks, scraps, collected dust, and floor sweepings", to which are added glue, chemicals and fillers; the product is then sprayed with nicotine that was extracted from the tobacco scraps, and shaped into curls. The cigarette is ignited at one end, causing it to smolder; the resulting smoke is orally inhaled via the opposite end. Most modern cigarettes are filtered, although this does not make them safer. Cigarette manufacturers have described cigarettes as a drug administration system for the delivery of nicotine in acceptable and attractive form. Cigarettes are addictive and cause cancer, chronic obstructive pulmonary disease, heart disease, and other health problems. 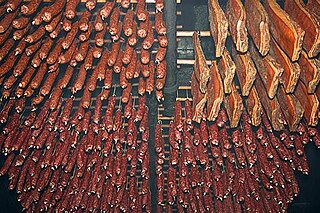 Smoking is the process of flavoring, browning, cooking, or preserving food by exposing it to smoke from burning or smoldering material, most often wood. Meat, fish, and lapsang souchong tea are often smoked.

A grocery store, grocer or grocery shop (U.K.), is a store primarily engaged in retailing a general range of food products, which may be fresh or packaged. In everyday U.S. usage, however, "grocery store" is a synonym for supermarket, and is not used to refer to other types of stores that sell groceries. In the U.K., shops that sell food are distinguished as grocers or grocery shops, though in everyday use, people usually use either the term "supermarket" or, for a smaller type of store that sells groceries, a "corner shop" or "convenience shop".

A farmers' market is a physical retail marketplace intended to sell foods directly by farmers to consumers. Farmers' markets may be indoors or outdoors and typically consist of booths, tables or stands where farmers sell their homegrown produce, live animals and plants, and sometimes prepared foods and beverages. Farmers' markets exist in many countries worldwide and reflect the local culture and economy. The size of the market may be just a few stalls or it may be as large as several city blocks. Due to their nature, they tend to be less rigidly regulated than retail produce shops. 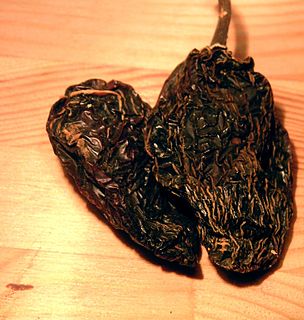 A chipotle, or chilpotle, is a smoke-dried ripe jalapeño chili pepper used for seasoning. It is a chili used primarily in Mexican and Mexican-inspired cuisines, such as Tex-Mex and Southwestern dishes. It comes in different forms, such as chipotles en adobo.

Whole Foods Market Inc. is an American multinational supermarket chain headquartered in Austin, Texas, which exclusively sells products free from hydrogenated fats and artificial colors, flavors, and preservatives. A USDA Certified Organic grocer in the United States, the chain is popularly known for its organic selections. Whole Foods has 500 stores in North America and seven in the United Kingdom as of March 4, 2019.

White Castle is an American regional hamburger restaurant chain with 377 locations across 13 states, with its greatest presence in the Midwest. It has been generally credited as the country's first fast-food hamburger chain. It is known for its small, square hamburgers referred to as "sliders". The burgers were initially priced at five cents until 1929 and remained at 10 cents until 1949. In the 1940s, White Castle periodically ran promotional ads in local newspapers which contained coupons offering five burgers for ten cents, takeout only.

Giant Eagle ( is an American supermarket chain with stores in Pennsylvania, Ohio, West Virginia, Indiana, and Maryland. The company was founded in 1918 in Pittsburgh, Pennsylvania, and incorporated on August 31, 1931. Supermarket News ranked Giant Eagle 21st on the "Top 75 North American Food Retailers" based on sales of $9.3 billion. In 2005, it was the 32nd-largest privately held company, as determined by Forbes. Based on 2005 revenue, Giant Eagle is the 49th-largest retailer in the United States. As of Summer 2014, the company had approximately $9.9 billion in annual sales. As of March 2019, Giant Eagle, Inc. had 216 supermarkets, 202 fuel station/convenience stores under the GetGo banner and 56 Ricker's fuel station/covenience stores. 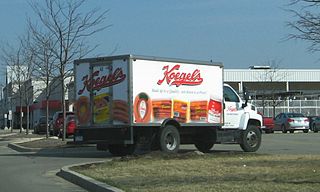 The Koegel Meat Company is a meat processing, packaging, and distribution company based in Flint, Michigan. Koegel's produces 35 products. Koegel's hot dogs are considered by the authors of "Coney Detroit" as the best hot dog for a Flint-Style Coney Dog along with Abbott's Meat's coney sauce. Koegel is also a supplier of A&W, about 200 Coney restaurants, Walmart, Dairy Queen and Kroger. Distribution of its own products to each store gives Koegel an advantage of being able to give a shorter shelf life, at half its competitors, to ensure a fresh product.

An appetizing store, typically in reference to Jewish cuisine, is best understood as a store that sells "the foods one eats with bagels." "Appetizing" is used as a noun by itself to refer to these type of foods.

Earth Fare is an American health and wellness supermarket with 9 locations in 4 states throughout the Southeast United States. It sells natural and organic food that the company claimed to have the highest product standards in the United States, and was one of the largest natural and organic food retailers in the country. After closing all stores in February 2020, three locations reopened in June 2020 and a total of 9 locations operate as of September 2020.

Smoked fish is fish that has been cured by smoking. Foods have been smoked by humans throughout history. Originally this was done as a preservative. In more recent times fish is readily preserved by refrigeration and freezing and the smoking of fish is generally done for the unique taste and flavour imparted by the smoking process.

Vantage is an American brand of cigarettes, currently owned and manufactured by the R.J. Reynolds Tobacco Company.

A smokehouse or smokery (British) is a building where meat or fish is cured with smoke. The finished product might be stored in the building, sometimes for a year or more. Even when smoke is not used, such a building—typically a subsidiary building—is sometimes referred to as a "smoke house." When smoke is not used, the term "meat house" is common. 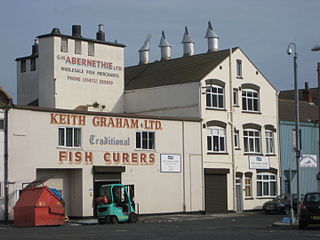 Traditional Grimsby smoked fish are regionally processed fish food products from the British fishing town of Grimsby, England. Grimsby has long been associated with the sea fishing industry, which once gave the town much of its wealth. At its peak in the 1950s, it was the largest and busiest fishing port in the world.

Curt's Famous Meats is a meat market located on East Truman Road in Independence, Missouri. Although it is in Independence, they are a known part of Kansas City-style barbecue history. Their products have won over 35 local and national barbecue awards, including their eight American Royal wins. They serve a variety of meats, ranging from common livestock and poultry to seafood and even frog legs. They also act as a small retail store, selling snacks and house hold items on one side of the store. Curt's currently has a clientele from all across the United States. 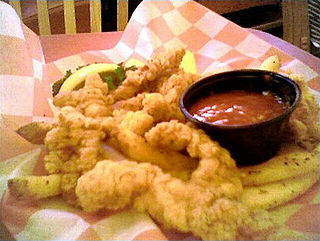 Alligator meat is the meat from alligators that is for consumption. It has been used both historically and in contemporary times in various cuisines of the Southern United States. Alligator eggs are also for consumption. Alligator meat has been described as a healthy meat source for humans due to its high protein and low fat composition. It has been described as being mild flavored and firm in texture.

The San Juan Market is a traditional Mexican market in the historic center of Mexico City that has become the city’s only such market specializing in gourmet and exotic foods. It is known for its selection of exotic meats, including venison, crocodile, wild boar and even lion meat, as well as a wide selection of products from Europe and the Americas. Unlike other such markets in Mexico City, it caters to chefs, restaurateurs and foodies, many of whom are foreigners and have long-standing relationships with particular vendors.

Lucky's Market is an American supermarket chain started in Boulder, Colorado. Founded in 2003 by Bo and Trish Sharon, the chain focuses primarily on organic food. From 2016 to 2019, the company was partially owned by the Kroger supermarket chain. At its peak in 2019, the company had 39 stores in ten states. The withdrawal of financial support from Kroger at the end of 2019 led to a massive company downsizing to just six surviving stores in four states and a Chapter 11 bankruptcy protection filing in 2020.