Thurn en Taxis (French: Tour et Taxis) is a railway station in Laeken in Brussels, Belgium, opened in 1883. The train station occupies the same site as the Line 6 metro station Pannenhuis. The station is located on the rue Charles Demeer.

The station was opened on 1 May 1883 as "Pannenhuis" and later renamed to "Brussels North-West". The station closed down on 3 June 1984, but reopened in 2015 as part of the Brussels RER project under the name "Tour et Taxis".

The Réseau Express Régional, commonly abbreviated RER, is a hybrid suburban commuter and rapid transit system serving Paris and its suburbs. The RER combines the operations and roles of a local city-centre underground rail system and suburbs-to-city-centre commuter rail. Inside the city centre, the RER functions much like the Métro, although it is faster, as it has fewer stops. This has made it a model for proposals to improve transit within other cities. 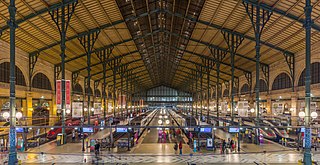 The Gare du Nord, officially Paris-Nord, is one of the six large terminus stations of the SNCF mainline network for Paris, France. It serves train services toward regions north of Paris, along the Paris–Lille railway. Near Gare de l'Est in the 10th arrondissement, the Gare du Nord offers connections with several urban transport lines, including Paris Métro, RER and buses. By the number of travelers, around 222 million per year, it is the busiest railway station in Europe by total passenger numbers.

RER A is one of the five lines in the Réseau Express Régional, a hybrid suburban commuter and rapid transit system serving Paris, France and its suburbs. The 108.5 km (67.4 mi) RER A line crosses the Paris region from east to west, with all trains serving a group of stations in central Paris, before branching out towards the ends of the line. 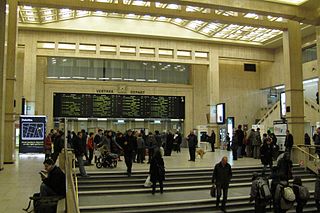 Brussels Central Station is a railway and metro station in central Brussels, Belgium. It is the second busiest railway station in Belgium and one of three principal railway stations in Brussels, together with Brussels-South and Brussels-North. First completed in 1952 after protracted delays caused by economic difficulties and World War II, it is the newest of Brussels' main rail hubs.

Merode is a railway and metro station in Brussels, Belgium. The metro station is located in the municipality of Etterbeek, under the "Porte de Tervueren/Tervuursepoort," which is the start of Avenue de Tervueren/Tervurenlaan, a major street in Brussels. The underground train station is located under the "Place Prince Jean de Mérode/Prins Jean de Merodeplein," named in honour of Jean Philippe Eugène de Mérode, after whom the station is also named. The two stations are connected by an underground hallway.

Gare du Nord is a station on Line 4 and Line 5 of the Paris Métro. It is the busiest station in the system, with 48 million entrances a year. It is connected to the SNCF railway station Gare du Nord, which is served by RER B, RER D and Transilien Nord commuter trains as well as interurban trains to northern France, Eurostar trains to London and Thalys trains to Brussels, Amsterdam and Cologne. The station is also connected to the La Chapelle Métro station on Line 2 and to the Magenta RER station on RER E.

Gare d'Austerlitz is a station on the Paris Métro, serving line 5 and forming the eastern terminus of line 10 in the 5th and the 13th arrondissements. The Line 5 station hall, "probably the most atypical of the Paris Métro", is open to the exterior though under the roof of the mainline Gare d'Austerlitz and forms part of a sinuous elevated section which has been "considered an exceptional work of urban railway insertion".

Brussels-West Station is a multimodal transport hub located in the municipality of Molenbeek-Saint-Jean, in the western part of Brussels (Belgium). The metro station opened on 6 October 1982 as part of the Beekkant–Saint Guidon/Sint-Guido extension of former line 1B. Following the reorganisation of the Brussels metro on 4 April 2009, it is served by lines 1, 2, 5 and 6.

Watermael railway station is a railway station in the municipality of Watermael-Boitsfort in Brussels, Belgium operated by SNCB/NMBS. The station is located on the line 161 connecting Brussels to Namur, between the stations of Etterbeek and Boitsfort. It has been painted many times by famous painter Paul Delvaux. 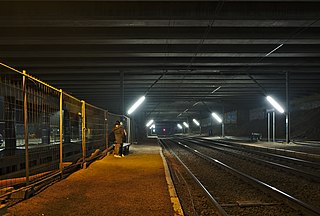 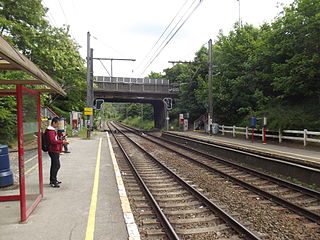 Saint-Job railway station is a railway station in the municipality of Uccle in Brussels, Belgium. The station operated by SNCB/NMBS is located on line 26 between the stations of Boondael and Moensberg. The station is named after the nearby Place de Saint-Job, but it can also be accessed from the other end of the Avenue Prince de Ligne/Prins de Lignelaan at Vivier d'Oie/Diesdelle. 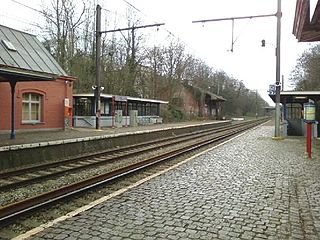 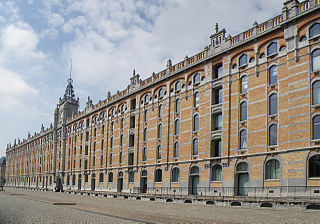 Tour & Taxis is a large former industrial site in Brussels, Belgium. It is situated on the Brussels Canal in the City of Brussels, just northwest of the city centre, immediately adjacent to Laeken and Molenbeek-Saint-Jean, and about 1 kilometre west from the Northern Quarter financial district.