Thurnham Hall is a grade-I-listed 17th-century country house in the village of Thurnham, Lancashire, England some 10 km (6 miles) south of Lancaster.

The present building is a three-storey stone-built house probably built in the 17th century for Robert Dalton. It stands facing west in 30 acres of rising ground about a half a kilometre (quarter of a mile) from the left bank of the River Conder. The building contains an impressive Jacobean Great Hall and now functions as a resort hotel. [1]

In the 12th century the property belonged to the de Thurnham family and then, by descent, to the Flemming, Cancerfield, Harrington, Bonvile and Grey families. Henry Grey, 1st Duke of Suffolk, and father of Lady Jane Grey, [2] sold the estate to London grocer Thomas Lonne, who resold it three years later to Robert Dalton of Bispham, Lancashire. Robert probably built the present house soon after the purchase. His only son Thomas was mortally wounded at the second Battle of Newbury and the estate passed, after having been confiscated and later returned, to Thomas' young son Robert. Robert left only a daughter, Elizabeth, who married William de Hoghton of Park Hall, Charnock Richard. Their son John took the surname Dalton and was involved in the Jacobite rising of 1715. For this he was imprisoned in London and his land was confiscated, but after his release he walked back to Lancaster and recovered Thurnham after paying a large fine.

John Dalton married Mary Gage and carried out some modernisation of the building in 1823, replacing the front facade and adding corner turrets and embattled parapet. His son John died childless and the property passed to John Jnr's sister Elizabeth in 1837, who built a private chapel in the hall in 1854. On her death in 1861 she was succeeded by a distant cousin, Sir James Fitzgerald, who adopted the additional surname of Dalton. He died childless in 1867 without issue and his brother, Sir Gerald Dalton-Fitzgerald, succeeded to the property. Most of the contents of Thurnham were sold and the remainder transferred to the Dalton-Fitzgerald's Essex estate.

Thurnham then returned to the main Dalton line in the form of William Henry Dalton and descended in turn via his sons John Henry and William Augustus. After the latter's death the hall stood empty and became derelict. It was purchased in the early 1970s by Stanley Crabtree who completely renovated the building. [3] Part of the hall had been damaged by fire in 1959. 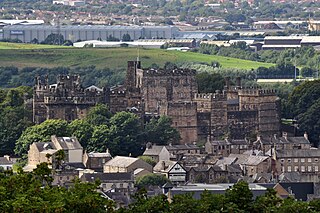 Lancaster Castle is a medieval castle in Lancaster in the English county of Lancashire. Its early history is unclear, but may have been founded in the 11th century on the site of a Roman fort overlooking a crossing of the River Lune. In 1164, the Honour of Lancaster, including the castle, came under royal control. In 1322 and 1389 the Scots invaded England, progressing as far as Lancaster and damaging the castle. It was not to see military action again until the English Civil War. The castle was first used as a prison in 1196 although this aspect became more important during the English Civil War. The castle buildings are owned by the British sovereign as Duke of Lancaster, part of the structure is used to host sittings of the Crown Court.

Halton Hall was an English country house that stood in the grounds of the Halton Hall Estates and Manor for several centuries on the "right bank of the River Lune to the south of the church" in Halton, Lancashire.

Hornby Castle is a country house, developed from a medieval castle, standing to the east of the village of Hornby in the Lune Valley, Lancashire, England. It occupies a position overlooking the village in a curve of the River Wenning. The house is recorded in the National Heritage List for England as a designated Grade I listed building.

Cockersand Abbey is a former abbey and former civil parish near Cockerham in the City of Lancaster district of Lancashire, England. It is situated near the mouth of the River Cocker. 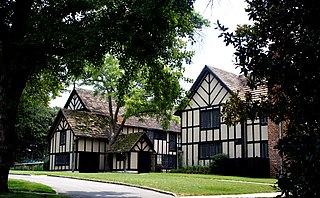 Agecroft Hall is a Tudor manor house and estate located at 4305 Sulgrave Road on the James River in the Windsor Farms neighborhood of Richmond, Virginia, United States. The manor house was built in the late 15th century, and was originally located in the Irwell Valley at Agecroft, Pendlebury, then in the historic county of Lancashire, England, but by the 20th century it was unoccupied and in a state of disrepair.

The Weld-Blundell family are a cadet branch, arisen in 1843, of the English Welds of Lulworth. It is an old gentry family which claims descent from Eadric the Wild and is related to other Weld branches in several parts of the United Kingdom, notably from Willey, Shropshire and others in the Antipodes and America. A notable early Weld was William de Welde, High Sheriff of London in 1352, whose progeny moved in and out of obscurity. 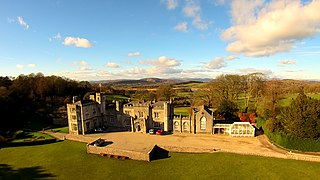 Leighton Hall is a historic house 0.5 miles (1 km) to the west of Yealand Conyers, Lancashire, England. It is recorded in the National Heritage List for England as a designated Grade II* listed building.

Rivington Hall is a Grade II* listed building in Rivington, Lancashire, England. It was the manor house for the Lords of the Manor of Rivington. The hall is of various builds as successor to a 15th-century timber-framed courtyard house that was built near to the present building of which no trace remains. It is a private residence. 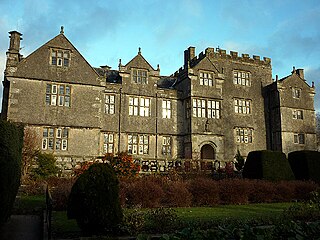 Borwick Hall is a 16th-century manor house at Borwick, Lancashire, England. It is a Grade I listed building and is now used as a residential outdoor education and conference centre by Lancashire County Council. 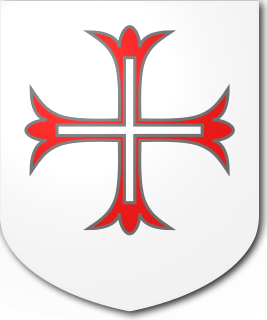 The Pilkington family has its origins in the ancient township of Pilkington in the historic county of Lancashire, England. After about 1405 the family seat was Stand Old Hall which was built to replace Old Hall in Pilkington. The new hall was built on high land overlooking Pilkington's medieval deer park. Stand Old Hall was replaced by Stand Hall to the south in 1515 after the Pilkingtons were dispossessed. Stand Old Hall became a barn. It is possible that Sir Thomas Pilkington had permission to “embattle” his manor house in 1470 building a stone tower. It was a ruin by the 1950s and demolished in the early 1960s. 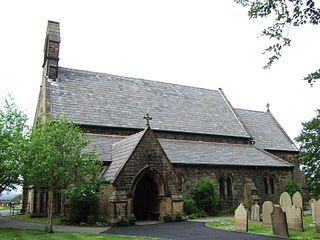 Wrightington is a civil parish in West Lancashire, England, with an area of 3,915½ acres. The surface is hilly, rising to over 400 ft. at Harrock on the border of Parbold, and then falling to the north, northeast and southeast. On the southern border, the boundary at Appley Bridge touches the River Douglas. Wrightington Hall is to the north of this point. Tunley and Broadhurst lie to the north of the park, and Fairhurst, to the west of Harrock, reaches down to the River Douglas. At the 2001 census, Wrightington had a population of 4,055, falling to 2,886 at the 2011 Census. 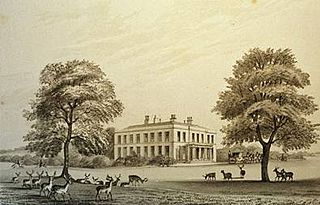 Duxbury Hall was a 19th-century country house in Duxbury Park estate in Duxbury Woods, Lancashire that has been demolished. 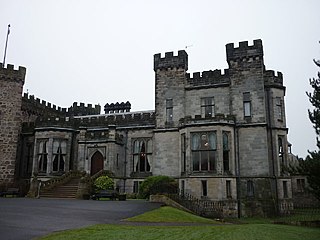 Ashton Hall is a largely rebuilt 14th-century mansion in the civil parish of Thurnham, Lancashire, England. It is 3 miles (4.8 km) south of the city of Lancaster and is on the east bank of the River Lune. is recorded in the National Heritage List for England as a designated Grade I listed building, and is now owned by Lancaster Golf Club.

Burrow Hall is a large 18th-century country house in Burrow-with-Burrow, Lancashire, England, which lies in the Lune Valley on the A683 some 2 miles (3 km) south of Kirkby Lonsdale.

Aldcliffe Hall was a 19th-century country house, now demolished, which replaced a previous mediaeval building, on the bank of the Lune estuary in Aldcliffe, Lancashire, England.

Quernmore Park Hall is a grade II* listed Georgian country house which stands in a 20-acre estate in the village of Quernmore, part of the City of Lancaster district of England. 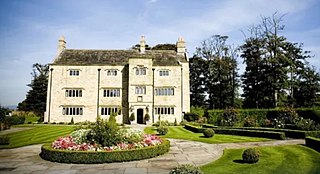 Stanley House in Mellor, Lancashire, England, is a building of historical significance and is Grade II* listed on the English Heritage Register. It was built in the late 16th or early 17th century and was the home of notable people for many years. However by the early 19th century the status of the house sank to that of a rented farmhouse. Farming activity continued over the next two centuries with tenant farmers being the occupants. In 1999 the land and buildings were then purchased by Leehand Leisure Ltd and they converted the building to a hotel and spa which opened in 2003.

Cockersand Abbey chapter house is a mausoleum in the English village of Thurnham, Lancashire. A Grade I listed building and formerly part of Cockersand Abbey, it dates to 1230. It was used as a family mausoleum by the Daltons of Thurnham Hall during the 18th and 19th centuries. The land was acquired by the Daltons shortly after 1556, when Robert Dalton married Ann Kitchen.