Mark "Thurop" Ashton Van Orman (born April 26, 1975) is an American cartoonist, animator, voice actor, television writer, producer and director best known for being the creator of Cartoon Network's The Marvelous Misadventures of Flapjack , in which he voices the title character.

Van Orman was born and raised in Norfolk, Virginia.

Van Orman worked for the video game company Zantaro before going on to study character animation at the California Institute of the Arts. [1] He was the storyboard artist and co-writer for Camp Lazlo , The Powerpuff Girls , and The Grim Adventures of Billy & Mandy . He was also the supervising producer for Adventure Time and served as one for Sanjay and Craig only in its first season. Thurop is also somewhat known for responding to much of his fans' fan art through the website DeviantArt. He is the director of The Angry Birds Movie 2 .

Van Orman has a brother named Jonny, from whom he took inspiration to start his animation career at Cartoon Network for Flapjack. He has been married to Sherri Van Orman since 1999 and has two children: a daughter named Blossom and a younger daughter named Hazel.

He is currently working on his stop motion film project titled Black Forest, [2] as well as provided concept art for the film adaptation of The Little Prince. He has also announced via Twitter that he will be writing a film about Vikings. 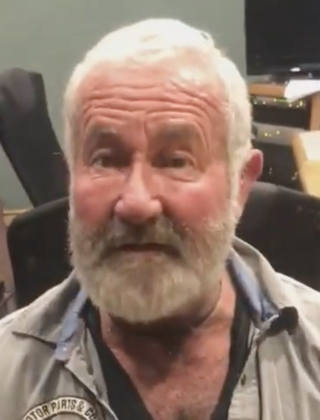 Charles Michael Adler is an American voice actor and voice director. He is known for his roles as Buster Bunny on Tiny Toon Adventures, Ed and Bev Bighead on Rocko's Modern Life and Ickis on Aaahh!!! Real Monsters. His credits also include Avengers Assemble, Brandy & Mr. Whiskers, Cow and Chicken, Earthworm Jim, G.I. Joe: Renegades, I Am Weasel and SWAT Kats: The Radical Squadron.

Fred Seibert is an American television producer, co-founder of MTV and the CEO of FredFilms, an animation production company based in Burbank, California. His official biography states he has led five (working) lives. He has held leading positions with MTV Networks, Hanna-Barbera, Next New Networks, and(founded) Frederator Studios and Networks. Seibert is an angel investor in several technology and media start-ups, has produced live action and animated programs for cable television and the internet, and began his professional career as a jazz and blues record producer. Seibert's work has been honored in numerous fields. In music production his production has been nominated for a Grammy Award, he has received an AIGA Medal for lifetime exceptional achievements, he is a member of the Animation Magazine Hall of Fame and has been awarded several Annie Awards and Emmy Awards for his television productions. 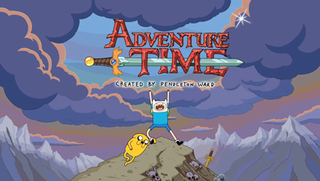 Adventure Time is an American fantasy animated television series created by Pendleton Ward for Cartoon Network and distributed by Warner Bros. Domestic Television. The series follows the adventures of a boy named Finn and his best friend and adoptive brother Jake —a dog with the magical power to change size and shape at will. Finn and Jake live in the post-apocalyptic Land of Ooo, where they interact with Princess Bubblegum, the Ice King, Marceline, BMO, and others. The series is based on a 2007 short film that aired on Nicktoons. After the short became a viral hit on the Internet, Nickelodeon's executives passed on its option before Cartoon Network commissioned a full-length series from Fred Seibert and Ward, which was previewed on March 11, 2010. The same year, the series premiered on Cartoon Network on April 5, and ended its eight-year run on September 3, 2018. 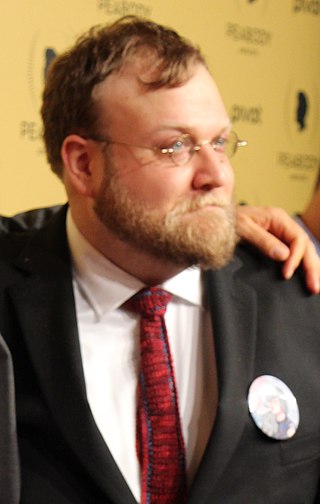 The Marvelous Misadventures of Flapjack is an American animated television series created by Thurop Van Orman for Cartoon Network. It premiered in the United States on June 5, 2008. It stars Van Orman as the voice of Flapjack, a naive young boy who was raised by a whale named Bubbie and is mentored by a crusty old pirate named Captain K'nuckles. Together the trio spend their days in Stormalong Harbor, where most of the show takes place, whilst getting into mishaps on the search for the elusive Candied Island.

Regular Show is an American animated sitcom created by J. G. Quintel for Cartoon Network. It ran from September 6, 2010, to January 16, 2017, over the course of eight seasons and 261 episodes. The series stars Mordecai, Rigby, their coworkers – Skips, Pops, Muscle Man and Hi-Five Ghost – and their boss, Benson, all of whom work at a local park as groundskeepers. Mordecai and Rigby spend their days slacking off and trying to avoid work to entertain themselves by any means, which leads to surrealistic, extreme and supernatural misconduct. 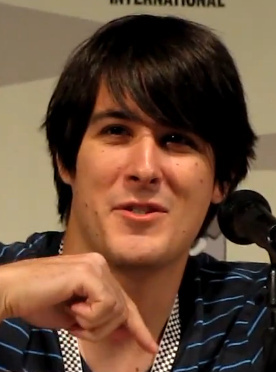 James Garland Quintel is an American animator, voice actor, director, writer, producer, and storyboard artist. He is best known as the creator of the Cartoon Network series Regular Show (2010–2017), in which he voiced Mordecai and High Five Ghost, and the HBO Max series Close Enough (2020–2022), in which he voices Josh.

Peter Browngardt is an American animator, storyboard artist, voice actor, writer and producer currently working as executive producer and creative director behind Looney Tunes Cartoons. He is perhaps best known for being the creator of Cartoon Network's Uncle Grandpa, in which he also voices the title character, a spin-off of the earlier Secret Mountain Fort Awesome. Browngardt has had prior experience working on shows such as Futurama, The Venture Bros., Chowder and The Marvelous Misadventures of Flapjack. His main contribution to the Adventure Time series is storyboarding and writing the episode "Wizard".

Kent Matthew Osborne is an American screenwriter, actor, animator, producer, and director. He has worked for such animated television shows as SpongeBob SquarePants, Camp Lazlo, Phineas and Ferb, The Marvelous Misadventures of Flapjack, Adventure Time, Regular Show and The Amazing World of Gumball, he has received multiple Emmy Award nominations and has won twice for Adventure Time. He is currently the head writer for Cartoon Network's animated series Summer Camp Island, which premiered in 2018. He has also starred in several mumblecore films, including Hannah Takes the Stairs, Nights and Weekends, All the Light in the Sky and Uncle Kent. His brother is the director Mark Osborne. Osborne had replaced Walt Dohrn as a storyboard director and writer after Dohrn left SpongeBob to work on more DreamWorks films in 2002. 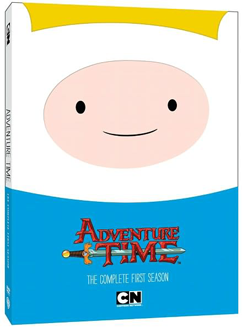 The first season of Adventure Time, an American animated television series created by Pendleton Ward, premiered on Cartoon Network on April 5, 2010 and concluded on September 27, 2010, and was produced by Frederator Studios and Cartoon Network Studios. The series is based on a short produced for Frederator's Nicktoons Network animation incubator series Random! Cartoons. The season follows the adventures of Finn, a human boy, and his best friend and adoptive brother Jake, a dog with magical powers to change shape and size at will. Finn and Jake live in the post-apocalyptic Land of Ooo, where they interact with the other main characters of the show: Princess Bubblegum, The Ice King, Marceline the Vampire Queen, Lumpy Space Princess, and BMO. 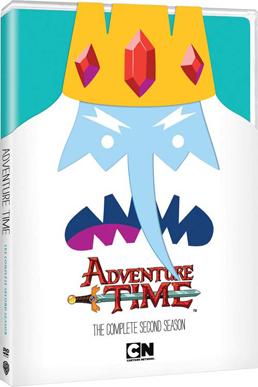 The second season of Adventure Time, an American animated television series created by Pendleton Ward, premiered on Cartoon Network on October 11, 2010 and concluded on May 2, 2011, and was produced by Frederator Studios and Cartoon Network Studios. The season follows the adventures of Finn, a human boy, and his best friend and adoptive brother Jake, a dog with magical powers to change shape and size at will. Finn and Jake live in the post-apocalyptic Land of Ooo, where they interact with the other main characters of the show: Princess Bubblegum, The Ice King, Marceline the Vampire Queen, Lumpy Space Princess, and BMO. 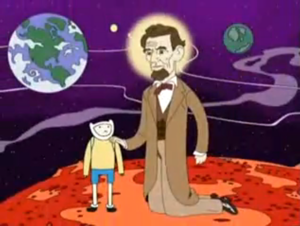 "Adventure Time" is an animated short created by Pendleton Ward, as well as the pilot to the Cartoon Network series of the same name. The short follows the adventures of Pen, a human boy, and his best friend Jake, a dog with magical powers to change shape and grow and shrink at will. In this episode, Pen and Jake have to rescue Princess Bubblegum from the antagonistic Ice King.

Sanjay and Craig is an American animated sitcom created by Jim Dirschberger, Jay Howell, and Andreas Trolf for Nickelodeon. Produced by Will McRobb and Chris Viscardi, the series revolves around Sanjay, voiced by Maulik Pancholy, and his best friend Craig, voiced by Chris Hardwick, a talking snake.

Cole Phillip Sanchez is an American artist, voice actor, writer, storyboard artist, director, and producer who is best known for being a writer, storyboard artist and director on the animated television series Adventure Time. Sanchez first rose to prominence when he became a storyboard artist of the Cartoon Network series The Marvelous Misadventures of Flapjack. Formerly, he was a supervising director on Long Live the Royals, and has since returned to Adventure Time to direct the last two seasons. He is currently supervising producer on the series Summer Camp Island. 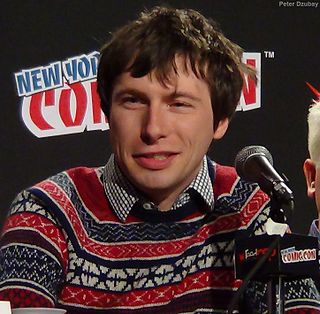 "The Eyes" is the second episode of the second season of the American animated television series Adventure Time. The episode was written and storyboarded by Kent Osborne and Somvilay Xayaphone, from a story by Merriwether Williams, Steve Little, Patrick McHale, Pendleton Ward, and Thurop Van Orman. It originally aired on Cartoon Network on October 18, 2010. 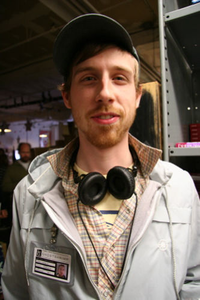 Daniel James Bandit, better known as Ghostshrimp, is an American graphic artist, animator and illustrator. His illustration work has appeared in The New York Times, The New Yorker, and on many album covers, including the MF DOOM and Bishop Nehru collaboration NehruvianDoom. He is the former lead background designer for the Cartoon Network series Adventure Time. He left midway through production of the fourth season to return to his freelance career, although he later temporarily returned to design backgrounds for the seventh season miniseries Stakes and several subsequent ninth and tenth-season episodes. Finally, for the same channel he created in 2013 the pilot Mars Safari!, which was released online as part of Cartoon Network Studios' shorts development program. 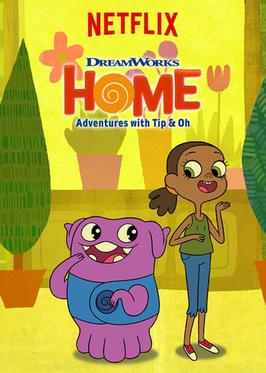 Home: Adventures with Tip & Oh is an American 2D animated television series produced by DreamWorks Animation and animated by Titmouse, which debuted on July 29, 2016, as a Netflix original series. It was developed by Ryan Crego and Thurop Van Orman, the latter of whom is the creator of Cartoon Network's The Marvelous Misadventures of Flapjack. The series is based on the 2015 DreamWorks animated film Home, which in turn was based on the 2007 novel The True Meaning of Smekday by Adam Rex. With the exception of Matt Jones, who returned as the voice of Kyle, none of the original cast reprised their roles.

Moore's Delicatessen, or Moore's Deli, was a restaurant located at 271 E Orange Grove Ave in Burbank, California. It served deli sandwiches, burgers, and other deli fare, along with breakfast foods, soups, and salads, as well as coffee and craft beer. The restaurant, located near Cartoon Network Studios, Nickelodeon Animation Studio, and Walt Disney Studios in Burbank, was known for its back room where animators, illustrators, and other artists from the aforementioned studios would draw on the walls.