Thurston Glacier is a glacier about 15 nautical miles (28 km) long which drains the southeast slopes of Mount Siple on Siple Island. The glacier trends eastward and then east-northeastward to reach the north shore of the island. Mapped by United States Geological Survey (USGS) from surveys and U.S. Navy aerial photography, 1959-65. Named by Advisory Committee on Antarctic Names (US-ACAN) for Thomas R. Thurston, United States Antarctic Research Program (USARP) meteorologist at Byrd Station in 1965.

Thurston is a village and a parish in Suffolk situated about 4 miles (6 km) east of Bury St Edmunds and 10 miles (16 km) west of Stowmarket.

Thurston railway station serves the village of Thurston in Suffolk, England. The station, and all trains serving it, are operated by Greater Anglia. 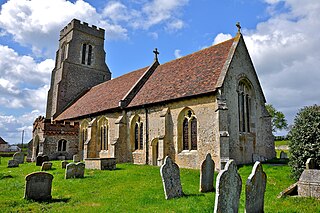 Hawkedon is a village and civil parish in the St Edmundsbury district of Suffolk in eastern England. Located around 7 miles (11 km) south-south-west of Bury St Edmunds, the parish also contains the hamlet of Thurston End, and in 2005 had a population of 120. The majority of the village is classed as a conservation area. 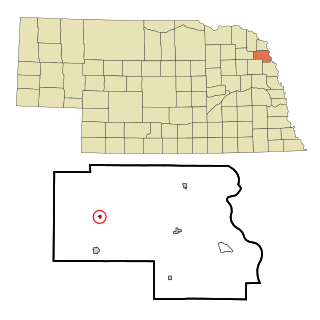 Thurston is a village in Thurston County, Nebraska, United States. The population was 132 at the 2010 census.

Thurston is a town in Steuben County, New York, United States. The population was 1,309 at the 2000 census. The town is named after early landowner William Thurston.

Thurston Gardens are the botanical gardens of Fiji. They used to be known as the Suva Botanical Gardens but its name was changed in honour of the fifth Governor of Fiji, Sir John Bates Thurston, who was Governor from February 1888 to March 1897. Thurston Gardens is located in central Suva, between Albert Park and the Government House.

USS Thurston (AP-77) was a troop transport that served with the United States Navy during World War II. She was named after counties in Nebraska and Washington.

Mercer may refer to:

Roscoe, also spelled Rosco or Roscow, may refer to:

Waverly may refer to:

Horton may refer to:

Gross may mean coarse, unrefined, or the total amount.

Allen, Allen's or Allens may refer to:

Caldwell may refer to:

Ellsworth may refer to:

Campbell may refer to:

Wallace may refer to:

Dodge is a brand of automobiles and trucks.

Randall may refer to the following:

Steele may refer to:

Green Valley is a common place name in English. It may refer to:

Duff may refer to:

Mills is the plural form of mill, but may also refer to:

Wheeler may refer to: