Thurston, Oregon may refer to:

Thurston is a neighborhood in the eastern part of Springfield, Oregon, United States on Oregon Route 126. Before being annexed by Springfield, it was formerly an unincorporated community with its own post office. The earliest land claims in the Thurston area by white settlers were in 1851. A small crossroads community, including a general store and a blacksmith shop, formed at the corner of Thurston Road and 66th Street. The settlement was named for pioneer George H. Thurston, and Thurston post office was established in 1877. The ZIP code for Thurston post office boxes is 97482. The ZIP code for delivered mail is 97478. 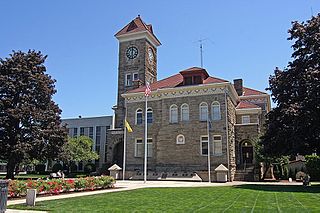 Polk County is a county located in the U.S. state of Oregon. As of the 2010 census, the population was 75,403, making it the least populous county in the Willamette Valley. The county seat is Dallas. The county is named for James Knox Polk, the 11th president of the United States. 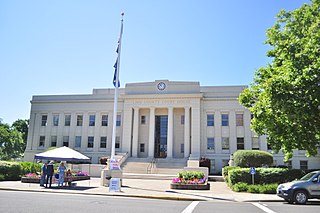 Linn County is a county located in the U.S. state of Oregon. As of the 2010 census, the population was 116,672. The county seat is Albany. The county is named in honor of Lewis F. Linn, a U.S. Senator from Missouri who advocated the American settlement of the Oregon Country. 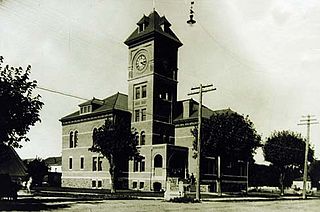 Lane County is a county in the U.S. state of Oregon. As of the 2010 census, the population was 351,715, making it the fourth-most populous county in Oregon. The county seat is Eugene. It is named in honor of Joseph Lane, Oregon's first territorial governor.

Grand Mound is a community and census-designated place (CDP) in Thurston County, Washington, United States. It was named and founded by Jotham Weeks Judson, father of Phoebe Judson, in 1851. The population was 2,981 at the 2010 census. This area uses the 98579 and 98531 zip codes, which also includes Rochester and Gate.

Robert William "Bob" Straub was an American politician and businessman from the state of Oregon. A native of California, he settled in Eugene, Oregon, where he entered politics. A Democratic politician, he served in the Oregon State Senate, as the Oregon State Treasurer, and one term as the 31st Governor of Oregon from 1975 to 1979. Like his perennial opponent for governor, Tom McCall, he was a noted environmentalist. 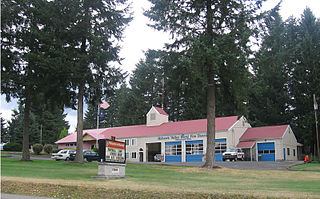 Marcola is an unincorporated community in Lane County, Oregon, United States, northeast of Springfield on the Mohawk River.

Finn Rock is an unincorporated community in Lane County, Oregon, United States. It is located on Oregon Route 126 and the McKenzie River, between the communities of Nimrod and Blue River, in the Willamette National Forest.

Matthew James LaBounty is a former American football player who played defensive end in the National Football League. He now lives in Eugene with his wife, Kelly Blair LaBounty and sons, Jacob and Lucas.

Walterville is an unincorporated community in Lane County, Oregon, United States. It is located six miles (9.7 km) east of Springfield on Oregon Route 126 near the McKenzie River.

Jasper is an unincorporated community in Lane County, Oregon, United States. It is southeast of Springfield on Oregon Route 222, at the confluence of Hills Creek and the Middle Fork Willamette River.

Wendling is an unincorporated community in Lane County, Oregon, United States, located northeast of Marcola. Wendling's post office operated from 1899 to 1952. It was named for George X. Wendling, a local lumberman.

The Thurston High School shooting took place on May 21, 1998. Expelled student Kip Kinkel first murdered his parents before engaging in a school shooting at Thurston High School in Springfield, Oregon that left two students, Ben Walker and Mikael Nickolauson, dead and 25 others wounded. Kinkel is currently serving a 111-year sentence without the possibility of parole.

Mohawk is an unincorporated community in Lane County, Oregon, United States, on the Mohawk River, about seven miles upstream from Springfield.

Willamalane Park and Recreation District maintains and operates six recreation facilities and 37 parks and open spaces that make up more than 700 acres. Highlights include Splash! at Lively Park, Camp Putt Adventure Golf Park, nine waterfront areas, 11 miles of hiking and biking trails, 19 sports fields and 21 playgrounds. Willamalane offers hundreds of recreation programs to more than 60,000 patrons. Created by voters in 1944, Willamalane is a special tax district, separate from the city of Springfield, Oregon, with its own boundaries. It is governed by a five-member, elected board of directors and managed by a district superintendent. Willamalane offers:

Daniel Steven Straily is an American professional baseball pitcher for the Miami Marlins of Major League Baseball (MLB). He made his MLB debut with the Oakland Athletics and has also pitched for the Chicago Cubs, Houston Astros, and Cincinnati Reds.

Springfield is a city in Lane County, Oregon, United States. Located in the Southern Willamette Valley, it is within the Eugene-Springfield Metropolitan Statistical Area. Separated from Eugene to the west, mainly by Interstate 5, Springfield is the second-most populous city in the metropolitan area after Eugene. As of the 2010 census, the city has a total population of 59,403.

John D. Lively is an American politician and a Democratic member of the Oregon House of Representatives representing District 12 since January 14, 2013. Lively was the mayor of Springfield, Oregon and a member of its city council from 1977 until 1986.