Thus is Life (Spanish: Así es la vida) is a 1930 American Spanish language romantic comedy film directed by George Crone and starring José Bohr, Delia Magana and Lolita Vendrell. It was produced as the Spanish version of the English language film What a Man! , also directed by Crone. [1] In the early years of sound such multi-language versions were common, and only declined with the development of dubbing.

A British ex-Grenadier Guards officer moves to America, but struggles to find work. After he is employed as a chauffeur to a wealthy family, he falls in love with his employer's daughter.

Blanca de Castejón was a Puerto Rican actress who is best remembered for her work in the Golden Age of Mexican cinema, especially her award-winning supporting role in Escuela de vagabundos. She was born in San Juan, Puerto Rico, and died in Mexico City.

Delia Magaña was a Mexican film and television actress, singer, and dancer. Although she started as a silent film actress, Magaña became best known for her comic supporting roles in her later years. For her 60 years in the film industry, as well as for contributing to the American cinema, Magaña's name and handprint are preserved in the sidewalk outside Mann's Chinese Theater in Hollywood, California.

La cuna vacía is a 1949 Argentine drama film directed by Carlos Rinaldi on his directorial debut. It stars Ángel Magaña, Orestes Caviglia and Nelly Duggan. The film, based on a story by Florencio Escardó, covers the turbulent life of Dr. Ricardo Gutiérrez.

Ritmo nuevo y vieja ola is a 1965 Argentine film directed by Enrique Carreras. It was written by Julio Porter. It premiered on 19 August 1965. 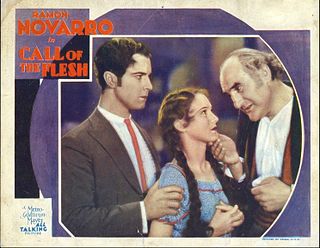 Shadows of Glory is a pre-Code Spanish-language American film released in 1930. It was produced by Sono Art-World Wide Pictures to serve as an alternate-language version of their English-language release Blaze o' Glory (1929). It was the first foreign-language sound film produced in the United States.

The Call of the Blood is a 1934 Mexican drama film written and directed by Jose Bohr. It stars Jose Bohr, Virginia Fabregas, Elisa Robles, and Sara García.

What a Man is a 1930 American romantic comedy film directed by George Crone and starring Reginald Denny, Miriam Seegar and Harvey Clark. It was an adaptation of the play They All Want Something by Courtenay Savage, which was itself based on a novel by E.J. Rath. A separate Spanish language version Thus Is Life was made at the same time. The film was remade in 1938 as Merrily We Live. It is also known by the alternative title The Gentleman Chauffeur.

Hollywood, City of Dreams is a 1931 American drama film directed by George Crone and starring José Bohr, Lia Torá and Donald Reed. It was a Spanish-language film made in the United States, as part of an effort to reach Spanish-speaking audiences around the world following the introduction of sound. Unlike some other Spanish-language films of the era, it was not a remake of an English film but an original story. 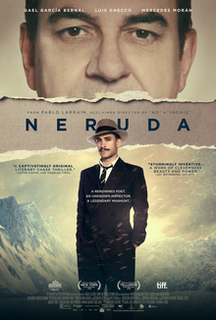 Neruda is a 2016 internationally co-produced biographical drama film directed by Pablo Larraín. Mixing history and fiction, the film shows the dramatic events of the suppression of Communists in Chile in 1948 and how the poet Pablo Neruda had to go on the run, eventually escaping on horseback over the Andes. 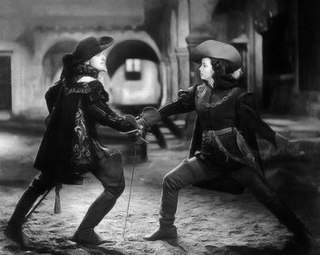 The Lieutenant Nun is a 1944 Mexican historical adventure film directed by Emilio Gómez Muriel and starring María Félix, Ángel Garasa and José Cibrián. It is based on the life of Catalina de Erauso.

The Price of Living is a 1954 Mexican drama film directed by Tito Davison and starring Arturo de Córdova, Rosita Quintana and María Douglas. It was the first Mexican film to be shot in 3D.