Thus Spoke Kishibe Rohan, known in Japan as Kishibe Rohan wa Ugokanai (Japanese: 岸辺露伴は動かない, "Rohan Kishibe Does Not Move"), is a series of manga one-shots created by Hirohiko Araki. It is a spin-off from Diamond Is Unbreakable , the fourth part of Araki's JoJo's Bizarre Adventure series, and features the character Rohan Kishibe, a manga artist who travels around the world to get inspiration from people's lives.

The series is published by Shueisha, starting with the one-shot "Episode 16: At a Confessional" in 1997 in their Weekly Shōnen Jump ; new episodes have since appeared in their Jump Square , Shōnen Jump+ and Bessatsu Margaret magazines. The series was originally meant to be completely original, but it was changed as Araki found it too tempting to use Rohan. A collected volume was released in 2013, and a second volume was released in 2018. The first volume was the 68th best selling manga volume of 2014 in Japan, and was well received by critics. Original video animation (OVA) adaptations were released by David Production from 2017 to 2020.

Set between Diamond Is Unbreakable and Golden Wind, the series follows the character Rohan Kishibe, a famous manga artist who wants to give his works more realism, and therefore travels around the world to draw inspiration from people's lives. He does this by using his Stand ability [2] – a manifestation of his inner strength, named "Heaven's Door", which he uses to read and write in a person, allowing him to learn everything about them and altering their memories and behaviors. [3]

Thus Spoke Kishibe Rohan is created by Hirohiko Araki in an episodic format. It began with "Episode 16: At a Confessional", which was published by Shueisha on July 7, 1997 in Weekly Shōnen Jump #30/1997. [4] [5] Although he had originally been asked to write a wholly original story, unrelated to JoJo's Bizarre Adventure, he found it too tempting to use his Diamond Is Unbreakable character Rohan Kishibe to resist. [3] For later episodes, the series switched back and forth between different Shueisha publications, with new episodes appearing in Weekly Shōnen Jump, Jump Square , Shōnen Jump+ , and Bessatsu Margaret . [4] [5] "Mochizuki Family Moon Viewing", the episode from the web magazine Shōnen Jump+, was part of the publication's launch line-up and was made available to read for free. [6]

A collected volume of one-shots by Araki, titled Under Execution Under Jailbreak, was released in 1999 in Japan, containing "At a Confessional" along with three other stories. [7] [8] A collected Thus Spoke Kishibe Rohan volume was later released in Japan, on November 19, 2013, containing the first four episodes, along with another one-shot titled "Kishibe Rohan Meets Gucci". [5] [9] [10] A second volume was released in Japan on July 19, 2018. [11] [12] The first volume was published by Star Comics in Italy on January 8, 2015 as Così parlò Rohan Kishibe, [13] and by Tonkam in France in April 2016 as Rohan Kishibe. [2]

An original video animation (OVA) adaptation of "Episode 5: Millionaire Village" [18] was produced by the animation studio David Production, with direction by Toshiyuki Kato, direction assistance by Yasufumi Soejima, character design by Shun'ichi Ishimoto, and Stand design by Kenta Mimuro. [19] The opening theme, "Kishibe Rohan wa Ugokanai no Tema", is performed by Yuugo Kanno, while the ending theme, "Finding the Truth", is performed by Coda. [20] The OVA was distributed on DVD in 2017 to people who had purchased all thirteen Japanese DVD or Blu-ray volumes of the 2016 television anime series JoJo's Bizarre Adventure: Diamond Is Unbreakable . [19] [21] Kato made use of different coloring compared to the Diamond Is Unbreakable anime, to capture the feeling of horror in the manga, and directed the opening sequence to simultaneously give off a feeling of nostalgia and unease, referencing television shows like The Twilight Zone (1959) and Twin Peaks (1990). [18] A second OVA episode by the same studio and staff, adapting "Episode 2: Mutsu-kabe Hill", was released on DVD on July 19, 2018 in a bundle with pre-orders of the limited edition of the second manga volume. [22] A single containing the opening and ending themes was released on the same day as the second OVA episode. [20] Two new OVA episodes, adapting "Episode 16: At a Confessional" and "Episode 9: The Run", were screened theatrically in nine cities in Japan starting on December 8, 2019, and were released on DVD and Blu-Ray on March 25, 2020. [23] [24]

The series was well received by critics. [3] [13] Maria Antonietta Idotta of MangaForever said that the series managed to express full range of drama, depth and complexity typical of Araki's long-form works despite its one-shot format, and called the artwork "sublime". [13] Takato of Manga-News also found it to capture the essence of Araki's long-form JoJo's Bizarre Adventure while working as a newcomer-friendly stand-alone work, and enjoyed how the shorter format caused a stronger focus on the atmosphere and world, making it feel like more than just a spin-off. Erkael, also writing for Manga-News, thought the art and writing would both satisfy existing fans and attract new ones, and called it "a pleasure to read" despite the change in tone compared to JoJo's Bizarre Adventure, with more elements of horror and high tension. [3]

JoJo's Bizarre Adventure is a Japanese manga series written and illustrated by Hirohiko Araki. It was serialized in Weekly Shōnen Jump from 1987 to 2004, and was transferred to the monthly seinen manga magazine Ultra Jump in 2005. The series is divided into eight story arcs, each following the adventures of a new protagonist bearing the "JoJo" nickname; the eighth, JoJolion, began its ongoing serialization in May 2011. JoJo's Bizarre Adventure is Shueisha's second largest manga by volume count, with its chapters collected in 127 tankōbon volumes as of April 2020.

Rurouni Kenshin: Meiji Swordsman Romantic Story, also known sometimes as Samurai X in the TV show, is a Japanese manga series written and illustrated by Nobuhiro Watsuki. The story begins during the 11th year of the Meiji period in Japan (1878) and follows a former assassin from the Bakumatsu, known as Hitokiri Battosai. After his work against the bakufu, Hitokiri Battosai disappears to become Himura Kenshin: a wandering swordsman who protects the people of Japan with a vow never to take another life. Watsuki wrote the series upon his desire to make a shōnen manga different from the other ones that were published at the time, with Kenshin being a former assassin and the story taking a more serious tone as it continued. The manga revolves around themes of atonement, peace, and romance.

The Prince of Tennis is a Japanese manga series written and illustrated by Takeshi Konomi. The manga was serialized in Shueisha's Weekly Shōnen Jump from July 1999 to March 2008. A total of 379 chapters were published and collected into 42 tankōbon volumes.

Hiroyuki Takei is a Japanese manga artist, best known as the creator of the multicultural hit, Shaman King.

Hirohiko Araki is a Japanese manga artist. He is best known for his long-running series JoJo's Bizarre Adventure, which was first published in Weekly Shōnen Jump in 1987 and has to date sold over 100 million copies in Japan alone. The series is known for frequent references to Western rock music, fashion, and Italy, all of which Araki is reportedly very fond of.

Baoh is a Japanese manga series written and illustrated by Hirohiko Araki, most famous for his manga JoJo's Bizarre Adventure. Originally serialized in Weekly Shōnen Jump from 1984 to 1985, it was later compiled into two tankōbon volumes. The series was adapted into a single-episode original video animation (OVA) by Studio Pierrot and distributed by Toho in 1989.

Phantom Blood is a 1987 manga series created by Hirohiko Araki, and the first part of the larger JoJo's Bizarre Adventure series. The manga was originally serialized by Shueisha in Weekly Shōnen Jump under the title JoJo's Bizarre Adventure Part 1 Jonathan Joestar: His Youth and was collected in five volumes; a three-volume collection was released by Shueisha in Japan in 2002, and by Viz Media in North America in 2014. It was followed by Battle Tendency.

Battle Tendency is the second story arc of the manga series JoJo's Bizarre Adventure written and illustrated by Hirohiko Araki. It was serialized in Weekly Shōnen Jump from 1987 to 1989 for 69 chapters, which were later collected into seven tankōbon volumes. The arc was preceded by Phantom Blood (1987) and followed by Stardust Crusaders (1989–1992).

Stardust Crusaders is the third story arc of the manga series JoJo's Bizarre Adventure written and illustrated by Hirohiko Araki. It was serialized in Weekly Shōnen Jump from 1989 to 1992 for 152 chapters, which were later collected into 16 tankōbon volumes. In its original publication, it was known as JoJo's Bizarre Adventure Part 3 Jotaro Kujo: Heritage for the Future. The arc was preceded by Battle Tendency and followed by Diamond Is Unbreakable. In 2012, Stardust Crusaders was digitally colored and released as digital downloads for smartphones and tablet computers. A ten-volume hardcover re-release under the title JoJonium was published between June 4, 2014 and March 4, 2015. Viz Media initially released the sixteen-volume format of the arc in North America between 2005 and 2010. They began releasing the hardcover format in November 2016.

Diamond Is Unbreakable is the fourth story arc of the Japanese manga series JoJo's Bizarre Adventure, written and illustrated by Hirohiko Araki. It was serialized in Weekly Shōnen Jump from 1992 to 1995, with the 174 chapters collected into eighteen tankōbon volumes. In its original publication, it was titled JoJo's Bizarre Adventure Part 4: Jōsuke Higashikata. It was preceded by Stardust Crusaders and followed by Golden Wind. Steel Ball Run is the reboot and seventh story arc of the Japanese manga series JoJo's Bizarre Adventure, written and illustrated by Hirohiko Araki. Set in 1890, it stars Gyro Zeppeli, a disgraced former executioner, and Johnny Joestar, a former star jockey who was shot and lost the use of his legs, as well as his fame and fortune. They, along with others, compete in the titular cross-continental race for $50 million, but the race has a hidden agenda behind it.

Toriko is a Japanese manga series written and illustrated by Mitsutoshi Shimabukuro. It follows the adventures of Toriko, a Gourmet Hunter, as he searches for rare, diverse foods to complete a full-course meal. On his journey, he is accompanied by a timid chef who wants to improve his skills. Toriko was serialized in Weekly Shōnen Jump from May 2008 to November 2016, with the chapters collected into 43 tankōbon volumes by Shueisha.

Haikyu!! is a Japanese manga series written and illustrated by Haruichi Furudate. The story follows Shōyō Hinata, a boy determined to become a great volleyball player despite his small stature. Its individual chapters were serialized in Weekly Shōnen Jump from February 2012 through July 2020. As of May 2020, forty-three tankōbon volumes have been released in Japan by Shueisha.

JoJo's Bizarre Adventure, also known as JoJo's Bizarre Adventure: The Animation, is a Japanese anime television series produced by David Production based on the manga of the same name by Hirohiko Araki. The series focuses on the mysterious adventures of the Joestar family across generations, from the end of the 19th century to modern times. The series was first broadcast on Tokyo MX before entering syndication on 4 JNN stations, BS11, and Animax. 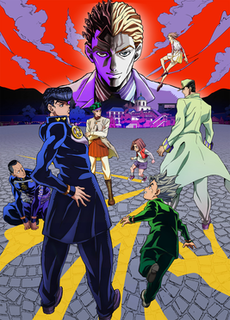 Kishibe is a Japanese surname. Notable people with the surname include: