Thutade Lake is located in the Omineca Mountains of the Northern Interior of British Columbia, Canada. About 40 km (25 mi) in length, and no more than about 2 km (1.2 mi) wide, the lake is primarily significant as the ultimate source of the Mackenzie River. [1] The lake is at the head of the Finlay River, [2] which joins the Peace River via Williston Lake. The area is very remote, being located about 260 km (160 mi) north of Smithers, although several mining operations for ores containing copper, lead, zinc and silver have occurred around the lake. [3] [4] The largest of these is the Kemess Mine, an iron and copper property originally owned by Royal Oak Mines and now by Northgate Minerals, located in the valley of Kemess Creek, which is off the northeast end of Thutade Lake. The mine is accessed by the Omineca Resource Road and other resource routes, and is 400 km (250 mi) by road from Prince George. Just downstream from the outlet of Thutade Lake, the Finlay plunges over the 180-foot (55 m) Cascadero Falls, [5] and then through a series of cataracts in a twisting course until it begins its main northeastward trend. Cascadero Falls is slated for hydroelectric development in connection with the power needs of the area's mines.

South and west of Thutade Lake lies the continental divide, across which is the watershed of the Mosque River, a tributary of the Skeena River.

The first European to explore the lake and its surrounding area was Samuel Black in 1824. [6] The upper end of the lake is the Tatlatui Range, which is astride the Continental Divide of the Americas, and which with the adjoining valley of Tatlatui Lake forms Tatlatui Provincial Park. 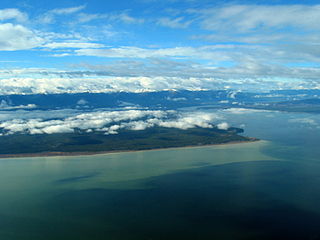 Williston Lake is a reservoir created by the W. A. C. Bennett Dam and is located in the Northern Interior of British Columbia, Canada. 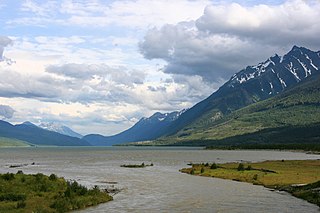 The Rocky Mountain Trench, also known as the Valley of a Thousand Peaks or simply the Trench, is a large valley on the western side of the northern part of North America's Rocky Mountains. The Trench is both visually and cartographically a striking physiographic feature extending approximately 1,600 km (1,000 mi) from Flathead Lake, Montana to the Liard River, just south of the British Columbia–Yukon border near Watson Lake, Yukon. The trench bottom is 3–16 km (1.9–9.9 mi) wide and is 600–900 m (2,000–3,000 ft) above sea level. The general orientation of the Trench is an almost straight 150/330° geographic north vector and has become convenient as a visual guide for aviators heading north or south.

Samuel Black was a Scottish fur trader and explorer, a clerk in the New North Nest Company (XYC) and Wintering Partner in the North West Company (NWC), and later clerk, chief trader, and chief factor in the Hudson's Bay Company (HBC) for the Columbia District. In 1824, he explored the Finlay River and its tributaries in present-day north-central British Columbia, Canada, including the Muskwa, Omineca and Stikine for the HBC. His journals were later published by the Hudson's Bay Record Society in 1955.

The Finlay River is a 402 km long river in north-central British Columbia flowing north and thence south from Thutade Lake in the Omineca Mountains to Williston Lake, the impounded waters of the Peace River formed by the completion of the W.A.C. Bennett Dam in 1968. Prior to this, the Finlay joined with the Parsnip River to form the Peace. The headwaters of the Finlay at Thutade Lake are considered the ultimate source of the Mackenzie River. Deserters Canyon is located just north of Williston Lake.

Kwadacha, also known as Fort Ware or simple Ware, is an aboriginal community in northern British Columbia, Canada, located in the Rocky Mountain Trench at the confluence of the Finlay, Kwadacha and Fox Rivers, in the Rocky Mountain Trench upstream from the end of the Finlay Reach of Williston Lake. The population is about 350. It is in the federal electoral riding of Prince George-Peace River.

Tatlatui Provincial Park is a provincial park in British Columbia, Canada, located at the southern end of the Spatsizi Plateau and around the headwaters of the Firesteel River, part of the Finlay-Peace River basin and therefore in the Arctic drainage. Thutade Lake, at the head of the Firesteel and to the southeast of the park, is considered the ultimate source of the Mackenzie River.

The Omineca Mountains, also known as "the Ominecas", are a group of remote mountain ranges in the Boreal Cordillera of north-central British Columbia, Canada. They are bounded by the Finlay River on the north, the Rocky Mountain Trench on the east, the Nation Lakes on the south, and the upper reaches of the Omineca River on the west. They form a section of the Continental Divide, that, in this region, separates water drainage between the Arctic and Pacific Oceans. The lower course of the Omineca River flows through the heart of the range. To the south of the Ominecas is the Nechako Plateau, to the west the Skeena Mountains and Hazelton Mountains, to the north the Spatsizi Plateau and the Stikine Ranges, while east across the Rocky Mountain Trench are the Muskwa Ranges. 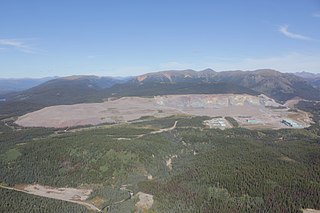 The Kemess Mine was an open-pit copper and gold mine, located just northeast of the foot of Thutade Lake, at the head of the Finlay River, in the Omineca Mountains of the Northern Interior of British Columbia, Canada. It was operated by Royal Oak Mines from 1998 to 1999, when it was bought by Northgate Minerals. Northgate operated the mine until its closure in 2011; that year Northgate was taken over by AuRico Gold. In 2014 AuRico Gold partitioned off its portion of Kemess Mine ownership creating a new company called AuRico Metals.

The Tatlatui Range is a large and very alpine mountain range on the east flank of the upper Skeena River in northern British Columbia, Canada. It has an area of 2307 km2 and is a subrange of the Omineca Mountains which in turn form part of the Interior Mountains. The range features several lakes, the largest of which, Thutade Lake, is at the head of the Finlay River, and is considered the ultimate source of the Mackenzie River. Tatlatui Lake, the next largest lake in the range, to the northwest of Thutade Lake, is at the head of the Firesteel River, a tributary of the Finlay. Various summits of the range, which as described separates the Pacific and Arctic drainages, form part of the Continental Divide. Most of the range and its lakes are in Tatlatui Provincial Park.

The Firesteel River is the uppermost left tributary of the Finlay River in the Northern Interior of British Columbia, Canada. The river originates at Tatlatui Lake, while the Finlay originates at the outlet of Thutade Lake, to the southeast, which is considered the ultimate source of the Mackenzie River.

Tatlatui Lake is a lake in the Tatlatui Range of the Omineca Mountains of the Northern Interior of British Columbia, Canada. It is the source of the Firesteel River, the uppermost left tributary of the Finlay River, which begins just southeast at Thutade Lake, which is considered the ultimate source of the Mackenzie River. The lake and adjoining summits are part of Tatlatui Provincial Park.

Cascadero Falls is a waterfall on the Finlay River in the Northern Interior of British Columbia, Canada, located just below that river's head at the outlet of Thutade Lake. The height of the falls is 180 ft and below it there are numerous cascades or rapids in a twisting course prior to the river's general northeastward trend from this area. The falls are slated for hydroelectric development in connection with the area's mines, the largest of which is the Kemess Mine owned by Northgate Minerals Inc., located just east of the foot of Thutade Lake in the valley of Kemess Creek.

Metsantan Pass, 1,270 metres (4,167 ft), is a mountain pass in the Metsantan Range of the Omineca Mountains in the Northern Interior of British Columbia, Canada. It is located between Metsantan Lake, in the drainage basin of the Stikine River (NW) and the headwaters of the Toodoggone River (SE), a tributary of the Finlay River which is part of the Peace-Mackenzie River drainage area, and therefore is located along the Continental Divide.

Vital Creek is a creek located in the Omineca Country region of British Columbia, flowing eastward from its source in the Vital Range to meet Silver Creek, joining that creek from the west about 5 miles from its mouth into the Omineca River, about 41 km northeast of Takla Landing.

Overlooking the Salmon Glacier, the Granduc Mine is a large copper mine which is situated on a rock ridge between a glacier and a cliff, some 22 miles (35 km) north of Stewart, BC at the north end of Summit Lake. It was an active mine from 1964 to 1984, having closed due to low copper prices. 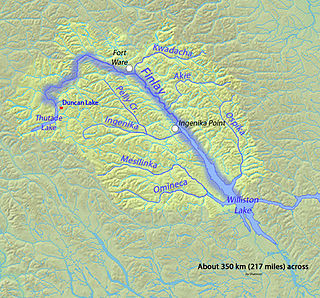 Duncan Lake – known as Amazay Lake in Sekani– is a natural 6 km (3.7 mi)-long wilderness fish-bearing lake with rainbow trout and whitefish populations, located at the headwaters of the Findlay watershed. in the Omineca Mountains of the Northern Interior of British Columbia, Canada. The Finlay River

The Mosque River is a tributary of the Skeena River in the Stikine Region of the province of British Columbia, Canada. It originates in the Tatlatui Range of the Skeena Mountains, and flows southwest about 50 km (31 mi) to the Skeena River, about 140 km (87 mi) north of Hazelton and about 160 km (99 mi) east of Stewart. Its watershed covers about 148 km2 (57 sq mi), and its mean annual discharge is 15.4 m3/s (540 cu ft/s).