Thway (Burmese : သွေး) is a 2003 film and the first Japan/Myanmar collaboration. It was directed by Koji Chino. The film is based on a bestselling novel, Thway, written by Journal Gyaw Ma Ma Lay. The Burmese name of the movie is Thway. The English name is The Bonds of Blood and the Japanese name is Chi no Kizuna.

Yumi is a university student who learns that she has a younger brother (Maung Maung) in Myanmar, who was born to her Japanese father Toshio Yoshida and a Myanmar woman, Ma Thwe Thwe. Toshio was a Japanese soldier sent to Myanmar during World War II. Yumi decides to visit Myanmar to meet her younger brother Maung Maung. Despite many difficulties, she finally meets Maung Maung. The beautiful but sad affection between Yumi and Maung Maung is described in the film.

This film employs both Japanese and Burmese languages with Burmese subtitles. It appeared at Thamada Cinema, Yangon on 24 May 2006. [1] Director Koji Chino attended the debut of the film in Tokyo on 8 December 2003 and in Kyoto, Osaka and other cities. The Japanese debut was crowded with Japanese World War II veterans. He screened the movie in Mandalay on 30 and 31 May 2006. [2]

Kōji Hashimoto, known professionally as Kōji Yakusho, is a Japanese actor. He is well known for his starring roles in Shall We Dance? (1996), Cure (1997), Memoirs of a Geisha (2005), 13 Assassins (2010), The Third Murder (2017), The Blood of Wolves (2018) and Under the Open Sky (2020). He is also best known internationally for his role as Takuro Yamashita in Shōhei Imamura's The Eel, which won the Palme d'Or at the 1997 Cannes Film Festival and as Yasujiro Wataya in Alejandro González Iñárritu's Babel (2006) which was nominated for Best Picture at the 79th Academy Awards. Yakusho has won three Japan Academy Prize for his performances in Shall We Dance?, The Third Murder and The Blood of Wolves. 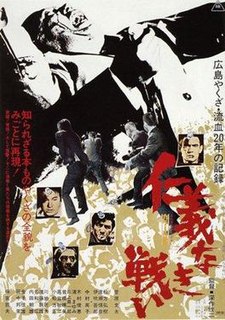 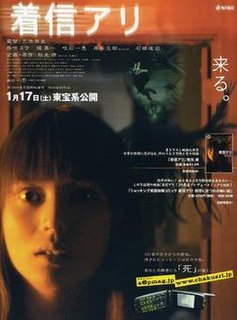 One Missed Call is a 2003 Japanese horror film directed by Takashi Miike. The film is based on the novel Chakushin Ari by Yasushi Akimoto. The plot revolves around Yumi Nakamura, a young psychology student whose friend Yoko gets a strange voice message on her cell phone. The message is dated two days in the future and Yoko can hear herself screaming in it. After Yoko mysteriously dies, her death sets off a chain of events which leads Yumi to discover that this phenomenon has been occurring throughout Japan long before Yoko received an alarming call from her future self. When Yumi receives a call with the date and time of her death, she struggles to save herself and learn the truth behind the calls.

Journal Kyaw Ma Ma Lay is widely acknowledged as one of the greatest Burmese writers of the 20th century. Her stories are known for authentic portrayals of modern Burmese society. Along with Ludu Daw Amar, Ma Ma Lay was one of a few female authors in Burma. She died in 1982 at the age of 65.

Nyi Pu was a Burmese actor and film director. He was the first film actor in Burmese cinema. His youngest brother was Tin Maung, an accomplished film director. 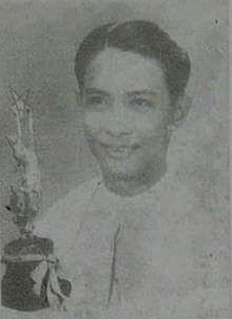 The Girl Who Leapt Through Time is a 1983 Japanese science fiction film directed and edited by Nobuhiko Obayashi, written by Wataru Kenmotsu, and starring idol Tomoyo Harada in her first film. It is based on the 1965 Japanese novel of the same name and was released by Toei in Japan on July 16, 1983. It has since been released internationally on DVD with English subtitles under various titles including The Little Girl Who Conquered Time, Girl of Time, The Girl Who Cut Time, among others.

Mariko Okada is a Japanese stage and film actress who starred in films of directors Mikio Naruse, Yasujirō Ozu, Keisuke Kinoshita and others. She is married to film director Yoshishige Yoshida.

Yumi Yoshiyuki is a Japanese film director, actress, and screenwriter best known for her work in the pink film genre. 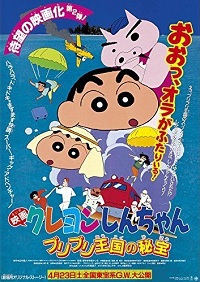 Crayon Shin-chan: The Hidden Treasure of the Buri Buri Kingdom is a 1994 Japanese anime film produced by Shin-Ei Animation. It is the 2nd film of the anime series Crayon Shin-chan.

Crayon Shin-chan: Great Adventure in Henderland is a 1996 Japanese anime film produced by Shin-Ei Animation. It is the 4th film of the anime series Crayon Shin-chan. 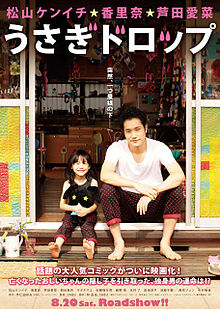 Bunny Drop, also known as Usagi Drop, is a 2011 Japanese drama film based on the manga of the same name by Yumi Unita. The film is directed by Sabu, and the screenplay was done by both Sabu and scriptwriter Tamio Hayashi. Bunny Drop stars actor Kenichi Matsuyama, who plays Daikichi, an office worker and a single man. Child actress Mana Ashida also plays Rin, a six-year-old illegitimate child of Daikichi's grandfather, in the film.

Anna Ishii is a Japanese dancer, actress and model. She is a former member of E-girls and represented by LDH.

Orange is a 2015 Japanese teen fantasy drama film based on the manga series of the same name by Ichigo Takano. It was released on December 12, 2015. 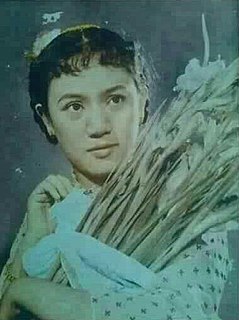