Thwon (Nepal Bhasa:थ्वं) is a type of alcoholic beverage. It is prepared on festivals and special occasions by the Newars. It is brewed from rice. This is a kind of Country Beer. Generally it can also be called Rice beer.

There are three types of Thwon:

The red variety is closer to wine. The white variety is thicker in consistency and can be very sweet.

This drink is very closely related to the culture of Newars. It is an indispensable part of Newari rituals and festivals. [1]

Newar or Newari, also known as Nepal Bhasa, is a Sino-Tibetan language spoken by the Newar people, the indigenous inhabitants of Nepal Mandala, which consists of the Kathmandu Valley and surrounding regions in Nepal.

Newar, or Nepami, are the historical inhabitants of the Kathmandu Valley and its surrounding areas in Nepal and the creators of its historic heritage and civilisation. Newars form a linguistic and cultural community of primarily Indo-Aryan and Tibeto-Burman ethnicities following Hinduism and Buddhism with Newari as their common language. Newars have developed a division of labour and a sophisticated urban civilisation not seen elsewhere in the Himalayan foothills. Newars have continued their age-old traditions and practices and pride themselves as the true custodians of the religion, culture and civilisation of Nepal.

Ranjitkar is one of the castes of Newar. The Newari caste system is divided according to profession. The Ranjitkar caste is concerned with the dyeing of clothes as well as other color related activities. The word "Ranjitkar" comes from Sanskrit origins crudely meaning "people concerned with colors" whereas the word "Chhipaa" is a Nepal Bhasa compound word which can be roughly translated as "color and allow to dry".

The culture of Nepal is intertwined with the culture of the boarder Indian subcontinent and Tibet. The cultural heritage of Nepal has evolved over the centuries. This multi-dimensional heritage bounds the diversities of Nepal's ethnic, tribal, and social groups, and it expresses in music and dance; art and craft; folklore and folktales; languages and literature; philosophy and religion; festivals and celebration; foods and drinks. Its culture is mostly influenced by Indian culture and Tibetan culture.

Newa Music, also spelled Newar Music, is traditional music developed in Nepal by the Newars. The music has its roots in classic Hindu and Buddhist music. It evolved with incorporation of folk music of the Kathmandu valley and its peripheries. Musical instruments mainly consist of percussion and wind instruments.

Newa cuisine is a subset of Nepalese cuisine that has developed over centuries among the Newars of Kathmandu, Nepal. Newa cuisine is the most celebrated food variety in the country that consists of over 200 dishes. It is more elaborate than most Nepalese cuisines because the Kathmandu Valley has exceptionally fertile alluvial soil and enough wealthy households to make growing produce more profitable than cultivating rice and other staples.

Nepalese cuisine comprises a variety of cuisines based upon ethnicity, soil and climate relating to Nepal's cultural diversity and geography.

Baji is a type of beaten rice eaten in Nepal. The most common word for it, and the one visitors to Nepal will generally encounter, is "chiura." "Baji" is the term used by the Newar culture in the Kathmandu Valley. Rice is a staple in Nepal, as throughout South Asia. The grain is incorporated into everyday life, festivals, and rituals. Chiura is a common snack among farmers and workers in rural Nepal. The snack is made by pounding rice. The dish can be served with yogurt, curry, and or meat. Often chiura is paired with tea as a mid-morning snack in the fields.

Jatra refers to the types of Newari Festivals involving street festival or carnival.

Baha is a type of courtyard found amongst Newar communities in Nepal. It is the most dominant type of courtyard in Newari Architecture. Baha is a Buddhist Monastery and derives its name from a Sanskrit word Bihara, meaning joy or enchantment and thus is a place of religious bliss. 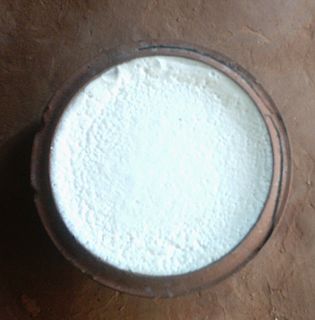 Dhau is yogurt prepared by Newars of Nepal. It is a milk product made by bacterial fermentation of milk. It is usually made in clay pots and plastic cups.

Yomari, also called Yamari, is a delicacy of the Newar community in Nepal. It is a steamed dumpling that consists of an external covering of rice flour and an inner content of sweet substances such as chaku. The delicacy plays a very important role in Newaa society, and is a key part of the festival of Yomari punhi. According to some, the triangular shape of the yamari is a symbolical representation of one half of the shadkona, the symbol of Saraswati and wisdom. 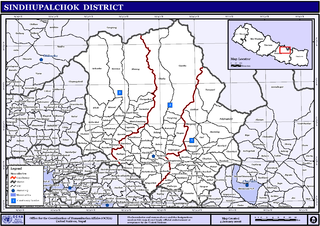 Chautara Sangachowkgadi is a municipality in Sindhupalchowk District in the Bagmati Zone of central Nepal. The municipality was established on 18 May 2014 by merging Pipaldanda, Chautara, Kubhinde, Sanusiruwari Village Development Committees as Chautara Municipality. Later on 2017 it was expended again merging Sangachok, Thulo Sirubari, Kadambas, Irkhu, Batase and Syaule Village Development Committees to form Chautara Sangachowkgadi Municipality. It is now divided to 14 wards. This is the district headquarters of the Sindhupalchowk District. The municipality stands at the elevation of approximately 1,600 m above sea level. Religious and cultural festivities form a major part of the lives of people residing in Chautara. There are people of various religious beliefs, Hinduism, Buddhism and Christianity as well, giving Chautara a cosmopolitan culture. Nepali is the most commonly spoken language in the municipality. Likewise, Newari and other languages such as Tamang is also spoken as the Newars and Tamangs dominate the settlement in population.

Yomari Punhi is a Newari festival marking the end of the rice harvest. It takes place in November/December during the full moon day of Thinlā (थिंला), the second month in the lunar Nepal Era calendar.

Aylā is a Newari beverage prepared by distillation of fermented ingredients such as rice, grains and millet. Apart from casual drinking, Aila is an important part of festivals in Nepal. This liquor is usually homemade and prepared by traditional methods. Its preparation is not yet commercial in Nepal, however it is sold in restaurant that serve Newa cuisine. It is about 60% alcohol and can be bought in local Newari restaurants. CNN has noted it as being one of the "50 most delicious drinks in the world".

Samay Baji is an authentic traditional dish of Newar community in Nepal. In recent years this food has become one of the main attractions of Nepal. It is considered as a typical dish of the Nepalese people. This dish has been passed down from many generations and is still much appreciated by the people. There are no specific seasons for this dish to be served but, mostly served during auspicious occasion, in family get-together and Newari Festivals. Samay baji is taken as starter in every festival, every religious activities and pujas. This is served in Sharada(death anniversary rituals) as well. It is taken throughout the year because of its simplicity; it is easy to make and can be stored for a long time. The Samay Baji is also taken during the major festivals of Nepal like Indra Jatra, Dashain, Tihar. This dish is served in almost all the activities of Newari people. 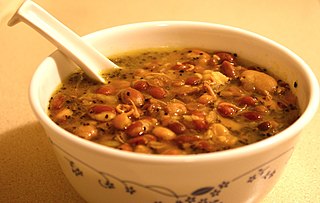 Kwāti is a mixed soup of nine types of sprouted beans. It is a traditional Nepalese dish consumed on the festival of Gun Punhi, the full moon day of Gunlā which is the tenth month in the Nepal Era lunar calendar. Kwāti is eaten as a delicacy and for its health benefits and ritual significance.Kwati is known to be a healthy food. They say that it cures cold, cough and is one of the best foods for women in their maternity leave. Since, it contains varieties of beans, this recipe is loaded with proteins and thus helps weak/sick people to regain their energy.

Malshree or Malashree Dhun or Malshree Dhoon is a Newa artform in which musicians perform devotional music, based on classical raga and taal system. The dhun is incorporated into mainstream Nepalese music as the music of Dashain. It is the tune that announces that Dashain, the biggest Hindu festival of Nepal, has arrived. Malashree dhun is one of the oldest surviving devotional musics of Nepal, with its origin in the 17th century.The Malshree dhun originally belongs to the Newari culture from the Kathmandu valley, and it’s a folk music of Newari culture which later on got amalgamated with the large Nepali culture and has become a traditional music of the biggest festival of Nepal, Dashain.