Thy Pale Dominion is the second demo album by the German band Bethlehem. It was self-released in 1993, and was later re-released in LP format. 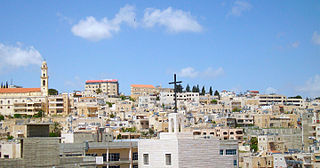 Bethlehem is a city located in the central West Bank, Palestine, about 10 km south of Jerusalem. Its population is approximately 25,000 people. It is the capital of the Bethlehem Governorate. The economy is primarily tourist-driven, peaking during the Christmas season, when Christians make pilgrimage to the Church of the Nativity. Rachel's Tomb, an important Jewish holy site, is located at the northern entrance of Bethlehem.

Bethlehem is a town in Litchfield County, Connecticut, United States. The population was 3,607 at the 2010 census, up from 3,422 at the 2000 census. The town center is a historic district and a census-designated place (CDP).

Bethlehem is a town in Albany County, New York, United States. The town's population was 33,656 at the 2010 census. Bethlehem is located immediately to the south of the City of Albany. Bethlehem includes the following hamlets: Delmar, Elsmere, Glenmont, North Bethlehem, Selkirk, Slingerlands, and South Bethlehem. U.S. Route 9W passes through the town. The town is named after the biblical Bethlehem.

Bethlehem Township is a township in Northampton County, Pennsylvania, United States. Bethlehem Township is located in the Lehigh Valley region of the state and is a suburb of Bethlehem, Pennsylvania. It falls within the New York-Newark-Jersey City, NY-NJ-PA Metropolitan Statistical Area, as defined by the United States Office of Management and Budget.

The Bethlehem Steel Corporation was an American steel and shipbuilding company that for much of the 20th century was one of the world's largest steel producer and shipbuilding companies. The company's roots trace to 1857 with the establishment of the Bethlehem Iron Company. Bethlehem Steel was formed in 1904 through the merger of the earlier companies, and existed through the decline of American steel manufacturing during the 1970s until its final bankruptcy in 2001. 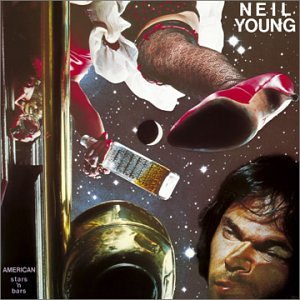 American Stars 'n Bars is the eighth studio album by Canadian musician Neil Young, released on Reprise Records in 1977. Compiled from recording sessions scattered over a 29-month period, it includes "Like a Hurricane," one of Young's best-known songs. It peaked at #21 on the Billboard 200 and received a RIAA gold certification.

Bethlehem Records was a jazz record company and label founded by Gus Wildi in 1953. 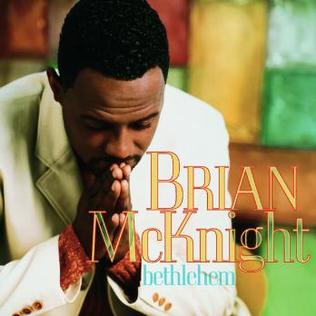 Bethlehem is the fourth studio album by American singer Brian McKnight. It was released by Motown Records on October 20, 1998. The album is a follow-up to his third album Anytime (1997) and is his first Christmas album. Bethlehem consists of eleven tracks, featuring original songs and cover versions of Christmas standards and carols, several of which are duets featuring recording artist such as Boyz II Men, Michael Sembello, Tim Miner, and Maria Cole as well McKnight's brother Claude and his sons.

Christmas Songs by Sinatra is the name of the third studio album by the American singer Frank Sinatra. It was released in 1948 as a 78 rpm album set and a 10" LP record featuring a collection of 8 holiday songs. A compilation album was released in 1994 including the songs released on the 1948 album along with Christmas songs from his years recording at Columbia.

The Postman is a 1997 American post-apocalyptic action-adventure film produced and directed by Kevin Costner and features him in the lead role. The screenplay was written by Eric Roth and Brian Helgeland, based on David Brin's 1985 book of the same name. The film also features Will Patton, Larenz Tate, Olivia Williams, James Russo, and Tom Petty.

Edward J. "Ned" or "Ed" Donaghy was an American soccer referee active in the 1920s and 1930s. Donaghy is a member of the National Soccer Hall of Fame, and managed a number of important matches, such as the finals of the National Challenge Cup in 1930 and 1934, as well as three games in the 1934 FIFA World Cup qualification.

Dusty Blue is an album by trumpeter Howard McGhee which was recorded in 1960 and released on the Bethlehem label.

Philadelphia Union II is an American professional soccer team based in Chester, Pennsylvania. Founded in 2015, the team plays in the USL Championship as the official affiliate of the Philadelphia Union of Major League Soccer. Its colors are navy blue, gold, and red. Brendan Burke is the head coach. The club was formerly based in Bethlehem, Pennsylvania and known as Bethlehem Steel FC.

The 2017 season is Bethlehem Steel FC's second season of competitive soccer in the United Soccer League and first season competing in the second division of American soccer. Steel FC compete in the league's Eastern Conference.

The 2018 season is Bethlehem Steel FC's third season of competitive soccer in the United Soccer League and second season competing in the second division of American soccer. Steel FC compete in the league's Eastern Conference.

The 2019 season is Bethlehem Steel FC's fourth season of competitive soccer in the USL Championship and third season competing in the second division of American soccer. Steel FC compete in the league's Eastern Conference.