The Thyagaraj Sport Complex is a sports stadium in New Delhi, India. It is owned by the Government of National Capital Territory of Delhi, and was built from scratch at a cost of ₹300 crore (US$42 million). It was designed by leading architects PTM of Australia and Kapoor & Associates of Delhi. [1] The venue was built as a venue for the 2010 Commonwealth Games, and was named after the South Indian music composer Tyagaraja. [2]

Constructed over an area of 16.5 acres (6.7 ha) [1] with a seating capacity of 5,883 persons, the Thyagaraj Stadium was built with green technologies such as the use of fly ash bricks in construction. The stadium will feature water management systems such as rainwater harvesting, sewage treatment with a capacity of 200,000 litres (44,000 imp gal; 53,000 US gal) per day, dual flush systems and sensor-based faucets. Landscaping is being done with an emphasis on native species and reduction in soil toxicity.

It is India's first-ever model Green Venue built with the latest green building technologies. The stadium has an R.C.C. structure with steel roofing and the flooring work has been done by using granite, recycled PVC, carpets, epoxy and Kota stone. The stadium has maple wood flooring in the central arena. In terms of power efficiency, the Thyagaraj Stadium will be setting a benchmark. Lighting will be provided using solar energy. In addition, building-integrated photovoltaic cells will allow the stadium to feed electricity to the grid. The Complex is also equipped with 2.5 megawatt-hours (9.0 GJ) Dual Fuel Gas Turbine to feed emergency electricity at Stadium. This Sport Complex is awarded Gold rating by Indian Green Building Council for its Green Features [3]

The Thyagaraj Stadium was a venue for netball during the 2010 Commonwealth Games, which were contested from 4–14 October 2010. Now, the stadium houses the education department of the Government of Delhi. [4] The 4th annual comic-con India took place here between 7–9 February 2014. The stadium is the home ground of Dabang Delhi in the Pro Kabaddi League, and will also host the India Open table tennis tournament from 2017. 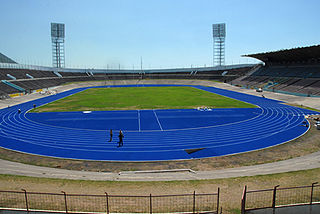 Independence Park is a sports and cultural complex in Kingston, Jamaica built for the 1966 British Empire and Commonwealth Games. It houses a variety of sports facilities. A statue of Bob Marley marks the entrance to the site. The main sports venue at the complex is the National Stadium. 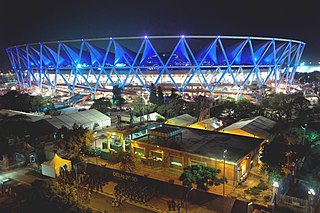 The Indira Gandhi Arena or Indira Gandhi Indoor Stadium, is located at the Indraprastha Estate in the eastern region of New Delhi, It is the largest indoor sports arena in India and the third-largest in Asia. The multi-purpose arena is used by tennis club Indian Aces. 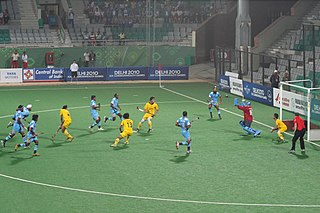 The Shree Chhatrapati Shivaji Sports Complex, Balewadi, Mahalunge, Pune is an Indian sports complex, which includes the Shree Shiv Chhatrapati Sports Complex Stadium. The complex is situated in Balewadi, Mahalunge Pune, about 14–15 km from Pune downtown and 4–5 km from Hinjawadi, Pune. This complex was the venue for the 2008 Commonwealth Youth Games. The sports complex is also venue for Khelo India Youth Games, 2019.

The DDA Siri Fort Sport Complex is a sports stadium in New Delhi, India. The complex was built for the 1982 Asian Games, next to the Asian Games village by the Delhi Development Authority (DDA), which also runs the facility now. Also close by is the Siri Fort Auditorium complex.

Dr. Karni Singh Shooting Range is a shooting range in New Delhi. Spread over 72 acres, it is situated on South Delhi ridges in the backdrop of Adilabad Fort, near the historic Tughlaqabad Fort to its North and Surajkund Lake to its South West. It was first constructed for the 1982 Asian Games in New Delhi, and later rebuilt altogether for the 2010 Commonwealth Games. It was named after Dr. Karni Singh who won the silver medal at the 38th World Shooting Championships at Cairo in 1962 and was the first shooter to be awarded the Arjuna Award in 1961. The reconstruction work started on 25 October 2008 and the project was completed at a cost of Rs. 150 crore in 13 months. It was dedicated to the nation on 31 January 2010 by Union Minister for Youth Affairs & Sports. 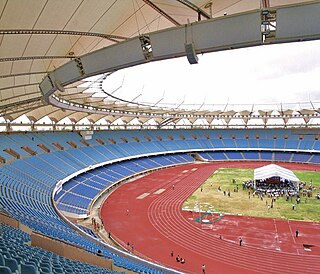 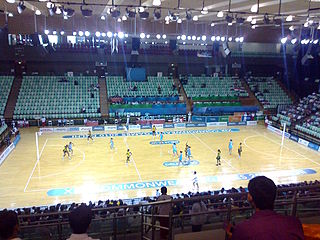 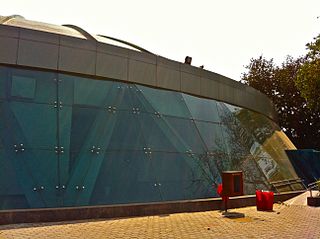 Talkatora Indoor Stadium is an indoor stadium located in New Delhi, India. The stadium has a capacity of 3035 people. The stadium is owned and managed by the New Delhi Municipal Council (NDMC).

The Yamuna Sports Complex is a sports complex located in New Delhi, India. Inaugurated in 1999, it hosts table tennis. It is owned by the Delhi Development Authority. It was a venue for the 2010 Commonwealth Games

The 2010 Commonwealth Games venues were all located in the host city of Delhi. 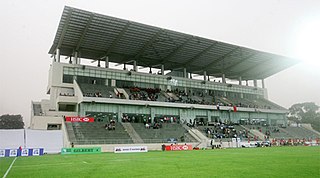 The Delhi University Stadium is a Rugby 7s stadium, situated within the North Campus of Delhi University. Spread over 10,000 square metres (110,000 sq ft), the stadium has a seating capacity of 2,500 permanent and 7,500 temporary seats. The construction work began in 2008 and it was inaugurated in July 2010, ahead of the 2010 Commonwealth Games, and also includes training area for Netball, Boxing, Women's Wrestling and Athletics. It hosts office of Delhi University Sports Council. It also houses other institutions of Delhi University like Delhi University Community Radio, Cluster Innovation Centre, Delhi School of Journalism. 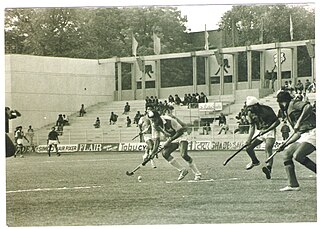 Sport in Delhi have a long and distinguished history. Delhi is the capital territory of India; it has hosted many major international tournaments and has professional teams in different national leagues like Hockey India League, Indian Premier League and Indian Super League.

Women started playing netball in India as early as 1926. The Sports Authority of India and the Government of India have provided a lot of funding with the goal of improving the performance of the country's youth national team. Netball Federation of INDIA was established in 1978 by Ch Jagat Singh ChOuhan hailing from Haryana who was an alumnus of YMCA College of Physical Education of Madras and at the same year he organised the first national championships in Jind, Haryana with great contribution of Mrs Shashi Prabha. Mr Jagat Singh Chouhan was founder/father of Handball, Netball and Throwball games in India. His efforts in Germany during Munich Olympics (1972) helped in making these a legacy in India. India had a national team compete in the fifth Asian Netball Championships in Colombo, Sri Lanka in 2001. National team captains include Prachi Tehlan, who captained the side that competed in the 2010 Commonwealth Games in Delhi.

Shivaji Hockey Stadium is a hockey stadium located in New Delhi, India. The stadium was one that was selected to host hockey matches for 2010 Commonwealth Games but stadium was not ready before the games as construction of seating facilities and one venues which was come controversies of Commonwealth Games.