Thyateira (also Thyatira) (Ancient Greek : Θυάτειρα) was the name of an ancient Greek city in Asia Minor, now the modern Turkish city of Akhisar ("white castle"). The name is probably Lydian. It lies in the far west of Turkey, south of Istanbul and almost due east of Athens. It is about 50 miles (80 km) from the Aegean Sea.

It was an ancient Greek city called Pelopia (Ancient Greek : Πελόπεια) and Semiramis (Ancient Greek : Σεμίραμις), [1] before it was renamed to Thyateira (Θυάτειρα), during the Hellenistic era in 290 BC, by the King Seleucus I Nicator. He was at war with Lysimachus when he learned that his wife had given birth to a daughter. According to Stephanus of Byzantium, he called this city "Thuateira" from Greek θυγάτηρ, θυγατέρα (thugatēr, thugatera), meaning "daughter", although it is likely that it is an older, Lydian name. [2] [3] In classical times, Thyatira stood on the border between Lydia and Mysia. During the Roman era, (1st century AD), it was famous for its dyeing facilities and was a center of the purple cloth trade. [4] Among the ancient ruins of the city, inscriptions have been found relating to the guild of dyers in the city. Indeed, more guilds συντεχνία suntechuia (syndicate) are known in Thyatira than any other contemporary city in the Roman province of Asia (inscriptions mention the following: wool-workers, linen-workers, makers of outer garments, dyers, leather-workers, tanners, potters, bakers, slave-dealers, and bronze-smiths). [5]

In early Christian times, Thyateira was home to a significant Christian church, mentioned as one of the seven Churches of the Book of Revelation in the Book of Revelation. [6] According to Revelation, a woman named Jezebel (who called herself a prophetess) taught and seduced the Christians of Thyateira to commit sexual immorality and to eat food sacrificed to idols. [7] However, some commentators such as Benson and Doddridge have concluded that what is being here practised in Thyatira is the same apostasy promoted in Israel by Jezebel as mentioned in the Books of Kings and that use of her name here is a direct reference to such. Indeed, as Doddridge notes, "the resemblance appears so great" that, in his view, it is the "same heresy which is represented". [8]

The Apostle Paul and Silas might have visited Thyateira during Paul's second or third journey, Acts 16:13-16. They visited several small unnamed towns in the general vicinity during the second journey. While in Philippi, Paul and Silas stayed with a woman named Lydia from Thyateira, who continued to help them even after they were jailed and released.

Artemidorus (Ancient Greek : Ἀρτεμίδωρος) of Thyateira was an ancient Greek Olympic winners of the Stadion race, in the 193rd Olympiad at 8 BC. [9]

Lydia of Thyatira, businesswoman in the Acts of the Apostles chapter 16 verse 11–40. She was the apostle Paul's first convert to Christianity in Europe.

The city was home to a Christian community from the apostolic period. The community continued until 1922, when the Orthodox Christian population was deported.

The see of Thyatira is also included, without archiepiscopal rank, in the Roman Catholic Church's list of titular sees. [14]

Lydia was an Iron Age kingdom of western Asia Minor located generally east of ancient Ionia in the modern western Turkish provinces of Uşak, Manisa and inland Izmir. The ethnic group inhabiting this kingdom are known as the Lydians, and their language, known as Lydian, was a member of the Anatolian branch of the Indo-European language family. The capital of Lydia was Sardis. 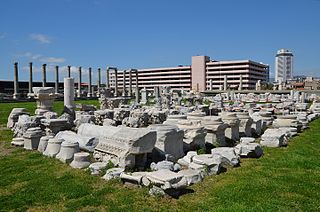 Smyrna was a Greek city located at a strategic point on the Aegean coast of Anatolia. Due to its advantageous port conditions, its ease of defence, and its good inland connections, Smyrna rose to prominence. The name of the city since about 1930 is İzmir.

Mysia was a region in the northwest of ancient Asia Minor. It was located on the south coast of the Sea of Marmara. It was bounded by Bithynia on the east, Phrygia on the southeast, Lydia on the south, Aeolis on the southwest, Troad on the west, and the Propontis on the north. In ancient times it was inhabited by the Mysians, Phrygians, Aeolian Greeks and other groups.

Silas or Silvanus was a leading member of the Early Christian community, who according to the New Testament accompanied Paul the Apostle on his second missionary journey.

Akhisar is a town and a district in Manisa Province; in the Aegean Region of western Turkey. Akhisar is also the ancient city of Thyatira.

Phoebe [Koine Greek: Φοίβη; Latin: Phœbē, Church Slavonic: Фива (Fiva), Armenian: Փիբէին (P̕ibēin)] was a first-century Christian woman mentioned by the Apostle Paul in his Epistle to the Romans, verses 16:1-2. A notable woman in the church of Cenchreae, she was trusted by Paul to deliver his letter to the Romans. Paul refers to her both as a "servant" or "deacon" and as a helper or patron of many. This is the only place in the New Testament where a woman is specifically referred to with these two distinctions. Paul introduces Phoebe as his emissary to the church in Rome and, because they are not acquainted with her, Paul provides them with her credentials. 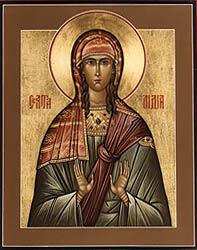 Derbe or Dervi, also called Derveia, was a city of Galatia in Asia Minor, and later of Lycaonia, and still later of Isauria and Cappadocia. It is mentioned in the Acts of the Apostles at 14:6, 14:20, 16:1 and 20:4. Derbe is notable because it is the only city mentioned in the New Testament where the message of the Gospel was accepted from the beginning by its inhabitants. 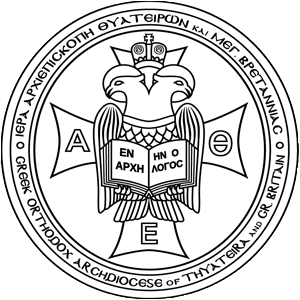 The Archdiocese of Thyateira and Great Britain is an archdiocese of the Eastern Orthodox Church, part of the Ecumenical Patriarchate of Constantinople. Its present head is Archbishop Nikitas Loulias. Its jurisdiction covers those Orthodox Christians living in Great Britain, the Republic of Ireland, the Isle of Man, and the Channel Islands. The adherents are largely of Cypriot Greek descent, mainland Greek migrants and their descendants, and more recently native British converts along with a few Poles, Belarusians, and Ukrainians. It is also the largest Orthodox Archdiocese in the British Isles. The former archbishop, Gregorios, himself was a Cypriot whose ancestral village of Marathovounos, in the district of Famagusta, is occupied by the Turkish army.

Beroea was an ancient city of the Hellenistic period and Roman Empire now known as Veria in Macedonia, Northern Greece. It is a small city on the eastern side of the Vermio Mountains north of Mount Olympus. The town is mentioned in the Acts of the Apostles as a place in which the apostles Paul, Silas and Timothy preached the Christian Gospel.

The See of Sardis or Sardes was an episcopal see in the city of that name. It was one of the Seven Churches of the Apocalypse, held by metropolitan bishops since the middle to late 1st century, with jurisdiction over the province of Lydia, when this was formed in 295. After 1369 it became a titular see both for the Greek Orthodox Church and the Roman Catholic Church.

In Greek mythology, Carius or Karios was the son of Zeus and Torrhebia. His mother's name is connected to Torrhebos, name of a city in Lydia. According to Hellanicus, there was a mountain named Karios (Carius) near this city, with the sanctuary of Carius situated on it. Nicolaus Damascenus related of him the following tale.

Acts 16 is the sixteenth chapter of the Acts of the Apostles in the New Testament of the Christian Bible. It records the second missionary journey of Paul, together with Silas and Timothy. The book containing this chapter is anonymous but early Christian tradition uniformly affirmed that Luke composed this book as well as the Gospel of Luke. 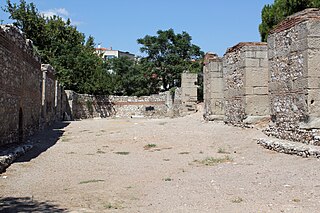 Bishopric of Thyatira is a titular see of the Roman Catholic Church centered on the ancient Roman city of Thyatira in Asia Minor.

Tabala, is the name of a Roman and Byzantine town and a Bishopric in ancient Lydia. Tabala was on the Hermus River, and minted its own coins. It is no doubt the same as the one mentioned by Hierocles under the name of Gabala, which is perhaps only miswritten for Tabala. It is even possible that it may be the town of Tabae or Tabai (Τάβαι), which Stephanus of Byzantium assigns to Lydia.

Apollonis , also known as Apollonia (Ἀπολλωνία), Apollones (Ἀπολλώνης), and Apollonias (Ἀπολλωνίας), was a city in ancient Lydia. It was located south of Apollonia in Mysia, where there is a ridge of hills, after crossing which the road to Sardis had on the left Thyatira, and on the right Apollonis, which was 300 stadia from Pergamum, and the same distance from Sardis. It was named after the queen Apollonis, the mother of Eumenes II and Attalus II of Pergamum, in the place of an older city; possibly Doidye. It was mentioned by Cicero. It was destroyed in 17 CE by the great earthquake that destroyed twelve cities of Asia Minor. Tiberius rebuilt the city. It issued coins; those from Marcus Aurelius to Severus Alexander are extant. Apollonis is a titular see of the Roman Catholic Church.

It is located 9 km. northeast of Ödemiş/İzmir.(ref: Tmolos’ta saklı kutsal bir kent Dioshieron, Hüseyin Üreten, Journal of International Social Research, Vol 9, Issue 44: 562-578) Dios Hieron was a town of ancient Lydia, in the upper valley of the Cayster River. The city became part of the Roman Republic and the Roman province of Asia with the annexation of the Kingdom of Pergamon. It also bore the name Diospolis (Διόσπολις), and was cited by the sixth century Byzantine geographer Stephanus of Byzantium under that name. It was renamed to Christopolis or Christoupolis in the 7th century and was known as Pyrgium or Pyrgion (Πυργίον) from the 12th century on. Pyrgion fell to the Turks in 1307, and became the capital of the beylik of Aydin. The town minted coins in antiquity, often with the inscription "Διοσιερειτων".