Thyella is a Greek word about the storm. The term Thyella also may refer to: 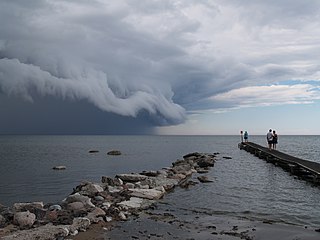 A storm is any disturbed state of an environment or in an astronomical body's atmosphere especially affecting its surface, and strongly implying severe weather. It may be marked by significant disruptions to normal conditions such as strong wind, tornadoes, hail, thunder and lightning, heavy precipitation, heavy freezing rain, strong winds, or wind transporting some substance through the atmosphere as in a dust storm, blizzard, sandstorm, etc.

Thyella ("Storm")(Greek: Α.Π.Σ. Θύελλα A.P.S. Thyella) is an athletic club in Patras in the Achaia prefecture. The club is one of the most popular in the entire prefecture of Achaia. The team was first created on June 14, 1930 and in the same year, the team entered the third division. Until 1938, the team reached the first category and played a protagonistic role and conquered many titles. In 1959 the team played under the Olympiacos name and played in the second division in the 1960-61 season, they played in the same division by renaming the club back to Thyella. Its colours are blue and white. They belong to the Achaia Football Clubs Association and won the Achaia championship two times.

Thyella Rafina F.C. is a Greek football club, based in Rafina, Attica. 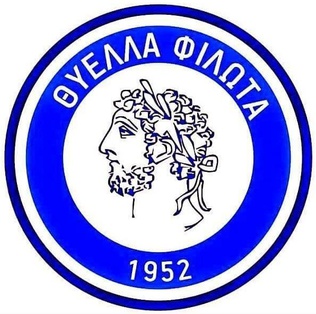 Thyella Filotas F.C. is a Greek football club, based in Filotas, Florina. 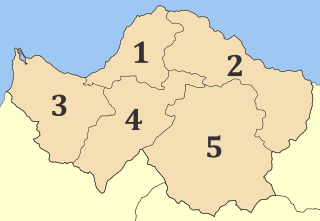 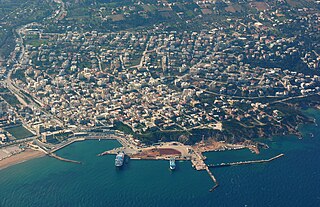 Rafina is a port town located on the eastern coast of Attica in Greece. It has a population of 13,091 inhabitants. Since the 2011 local government reform it is part of the municipality Rafina-Pikermi, of which it is the seat and a municipal unit. The municipal unit has an area of 18.979 km2.

Paniliakos Football Club is a Greek association football club, based in Pyrgos, Elis, Greece. The club plays in Gamma Ethniki, the third tier of Greek football. It plays its home matches at the Pyrgos Stadium.

Delta Ethniki was the fourth level of Greek football championship. During the period of its existence, it was the lowest national division of the Greek championship. It was founded in the 1982-83 season and abolished in the 2012-13 season, as it was merged with the third division. Its history therefore spans 31 years.

Sports clubs based in Patras, Greece.

Prosfygika is a neighbourhood in the southern Greek city of Patras. It was founded in 1922 as displaced persons from Asia Minor arrived in the city after the 1919–1922 Greco-Turkish War and the subsequent population exchange between Greece and Turkey.

Andreas Labropoulos, is a Greek professional footballer. He plays for as a Midfielder.

The Argolida Football Clubs Association was founded on 12 August 1964. Its formation was agreed at a meeting held on 23 May 1963, during a Panargiakos F.C. council meeting. The chairman of the meeting, Nikos Zafeiris, asked for approval for the founding of a Football association in Argolida. The Argolida's football clubs used to play at Argolidokorinthias Football Association, which was based in Corinthos. The Argolida Football Clubs Association organizes many events that support the interests of its members. There are more than 60 football pitches which are used by football clubs that are members of this association. The association organises an annual international football tournament called "Atreus" which is under the auspices of the Hellenic Football Federation and with the cooperation of Arsenal Soccer Schools.

The 2013–14 season will be A.E.K. Athens Football Club's 89th year in existence as a football club and the first after 55 years that the club will not be participating in the top flight of the Greek football. It is also the first season of the club's history that AEK won't be participating in the highest possible tier of the football competitions available. Because of that, the club will not participate in Greek Football Cup or in AFCA Cup, but in Football League 2 Cup.

The 2016–17 season was Ergotelis' 87th season in existence and 1st season in the Gamma Ethniki, the third tier of the Greek football league system, after 14 years in which the club competed in professional competitions. Ergotelis also participated in the Gamma Ethniki Cup, a football competition cup in which only the clubs competing in one of the four groups of the Gamma Ethniki can participate. The season marked the beginning of a new era in the club's history, as the previous Football Club opened winding-up proceedings entering into liquidation, a process that allowed the parent sport club G.S. Ergotelis to form a new football department eligible to compete in the Gamma Ethniki under new leadership, free of the financial obligations of the previous administration. The club slogan for the season Ksekiname! literally translates to We begin!. The project was successful, as Ergotelis finished as Champions of Group 4, achieving instant promotion to the Football League, and professional divisions in general.

Giorgos Kyriakopoulos is a Greek football player who plays as a left back for Super League club Asteras Tripolis.