In Greek mythology, Thyia ( /ˈθaɪə/ ; Ancient Greek : ΘυίαThuia derived from the verb θύω "to sacrifice") was the daughter of Deucalion and Pyrrha and mother of Magnes and Makednos (the claimed ancestor of the Macedonians) by Zeus, according to a quotation from Hesiod's lost work the Catalogue of Women , preserved in the De Thematibus of Constantine Porphyrogenitus and in Stephanus of Byzantium's Ethnika. [1] [2] [3] 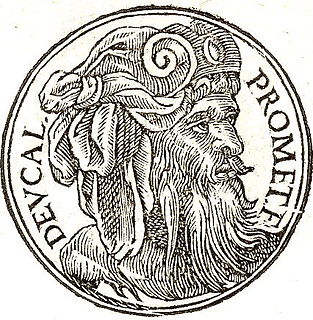 In Greek mythology, Magnes was a name attributed to two men.

In Greek mythology, Asteria was a name attributed to the following eleven individuals:

In Greek mythology, Hellen was the progenitor of the Hellenes (Ἕλληνες). His name is also another name for Greek, meaning a person of Greek descent or pertaining to Greek culture, and the source of the adjective "Hellenic".

In Greek mythology, Iapetus, also Japetus, was a Titan, the son of Uranus and Gaia, and father of Atlas, Prometheus, Epimetheus and Menoetius. He was also called the father of Buphagus and Anchiale in other sources.

Stephenus or Stephan of Byzantium, was the author of an important geographical dictionary entitled Ethnica (Ἐθνικά). Of the dictionary itself only meagre fragments survive, but we possess an epitome compiled by one Hermolaus, not otherwise identified.

Constantine VII Porphyrogennetos or Porphyrogenitus was the fourth Emperor of the Macedonian dynasty of the Byzantine Empire, reigning from 913 to 959. He was the son of the emperor Leo VI and his fourth wife, Zoe Karbonopsina, and the nephew of his predecessor, the emperor Alexander.

De Administrando Imperio is the Latin title of a Greek work written by the 10th-century Eastern Roman Emperor Constantine VII. The Greek title of the work is Πρὸς τὸν ἴδιον υἱὸν Ρωμανόν. It is a domestic and foreign policy manual for the use of Constantine's son and successor, the Emperor Romanos II.

Kallinikos or Latinized Callinicus was a Byzantine Greek architect and chemist from Heliopolis of Syria. He is credited with the invention of the Greek fire. According to Constantine Porphyrogenitus, Callinicus was a refugee from Syria who arrived in Byzantium in the time of Constantine IV and shared his knowledge of liquid fire with the Byzantines.

Hierocles was a Byzantine geographer of the sixth century and the attributed author of the Synecdemus or Synekdemos, which contains a table of administrative divisions of the Byzantine Empire and lists of the cities of each. The work is dated to the reign of Justinian but prior to 535, as it divides the 912 listed cities in the Empire among 64 Eparchies. The Synecdemus is thus one of the most invaluable monuments which we have to study the political geography of the sixth century East. The work of Hierocles along with that of Stephanus of Byzantium were the principal sources of Constantine VII's work on the Themes. Hierocles was published by Parthey then in a corrected text, by A. Burckhardt in the Teubner series. The most recent major publication was by E. Honigmann.

Dometiopolis was a city in the Roman province of Isauria in Asia Minor. Its ruins are found in the village of Katranlı, formerly Dindebul.

The Synecdemus or Synekdemos is a geographic text, attributed to Hierocles, which contains a table of administrative divisions of the Byzantine Empire and lists of their cities. The work is dated to the reign of Justinian but prior to 535, as it divides the 912 listed cities in the Empire among 64 Eparchies. The Synecdemus, along with the work of Stephanus of Byzantium were the principal sources of Constantine VII's work on the Themes.

Meander, Maeander, Mæander or Maiandros is a river god in Greek mythology, patron deity of the Meander river in Caria, southern Asia Minor. He is one of the sons of Oceanus and Tethys, and is the father of Cyanee, Samia, Kalamos and Callirhoe.

Niketas Oryphas or Oöryphas was a distinguished Byzantine official, patrikios, and admiral under the Byzantine emperors Michael III and Basil I the Macedonian, who achieved several naval victories against the Cretan Saracen raiders.

Lykandos or Lycandus was the name of a Byzantine fortress and military-civilian province, known as the Theme of Lykandos, in the 10th–11th centuries. 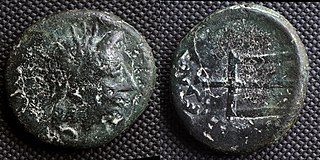 For the river, see Strymon/Struma

Charax in Bithynia or was a Byzantine town in what is modern Turkey.

Gyula (Julius) Moravcsik, who usually wrote just as Gy. Moravcsik, was a Hungarian professor of Greek philology and Byzantine history who in 1967 was awarded the Pour le Mérite for Sciences and Arts.

In Greek mythology, Magnes was the eponym and first king of Magnesia.

In Greek mythology, Thyia is the name two figures: