The larvae are a pest of cashew and mango. 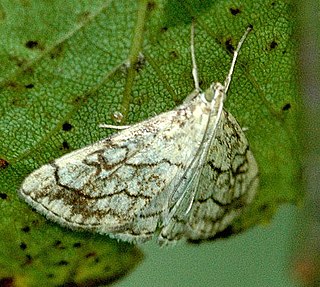 Evergestinae is a fairly small subfamily of the lepidopteran family Crambidae, the crambid snout moths. The subfamily was described by H. Marion in 1952. It contains roughly 140 species on all continents and continental islands. Evergestine moths resemble Pyraustinae; however, the male genitalia have a long uncus and long, slender gnathos. The larvae feed mostly on Brassicaceae. 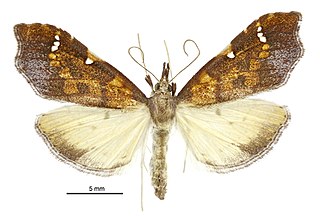 Deana is a monotypic moth genus of the family Crambidae described by Arthur Gardiner Butler in 1859. It contains only one species, Deana hybreasalis, which is endemic to New Zealand.

Mnesictena is a genus of snout moths in the subfamily Spilomelinae, where it is placed in the tribe Udeini. The genus was erected by the English entomologist Edward Meyrick in 1884. The currently known seven species are exclusively found on New Zealand and the associated Antipodes Islands and Chatham Islands. 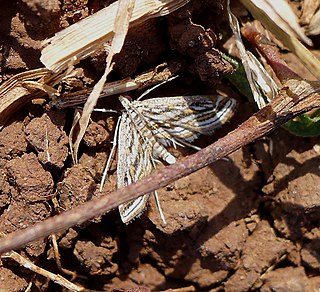 Parapoynx fluctuosalis is a moth of the family Crambidae. It is a widespread species, known from Africa, India, Sri Lanka, China, Japan, Malaysia, Taiwan, Guam, Hawaii, Fiji, Australia and the Galápagos Islands. It is also an introduced species in Europe, where it has been recorded from Great Britain, the Iberian Peninsula and Sardinia.

Ancylosis costistrigella is a species of snout moth in the genus Ancylosis. It was described by Ragonot, in 1890, and is known from the Canary Islands., Algeria, Tunisia, Morocco, Israel, Iran, Afghanistan, Bahrain, the United Arab Emirates and Sudan.

Ancylosis faustinella is a species of snout moth in the genus Ancylosis. It was described by Philipp Christoph Zeller, in 1867 from Palestine, but is also found on Malta and in Russia, as well as on the Canary Islands, in Algeria, Tunisia, Libya, Morocco, Egypt, Saudi Arabia, Yemen, Bahrain, Turkey, Afghanistan, Syria, Iran, Israel, Jordan, Lebanon, Mongolia, Pakistan, Niger and Sudan.

Ancylosis samaritanella is a species of snout moth in the genus Ancylosis. It was described by Zeller in 1867. It is found in Spain, Russia, Turkey, Jordan, the Canary Islands, Morocco, Algeria, Tunisia, Libya, Egypt, Sudan, Saudi Arabia, Turkestan and Central Asia.

Cryptoblabes plagioleuca, the mango-flower moth, blossom moth or mango-flower webber, is a species of snout moth in the genus Cryptoblabes. It was described by Turner in 1904. It is found from Indonesia to Australia and the Society Islands.

Phycitodes inquinatella is a species of snout moth. It is found in most of Europe, the Canary Islands, Turkey and the Palestinian Territories.

Oxybia is a monotypic snout moth genus described by Hans Rebel in 1901. Its only species, Oxybia transversella, was described by Philogène Auguste Joseph Duponchel in 1836. It is found in southern Europe and on the Canary Islands.

Tawhitia pentadactylus is a moth in the family Crambidae. It was described by Zeller in 1863. It is found in Australia (Tasmania) and in New Zealand, where it has been recorded from South Island and the southern part of the North Island. The habitat consists of subalpine swamps.

Penestola bufalis, the black penestola moth, is a moth in the family Crambidae. It was described by Achille Guenée in 1854. It is found in the US states of Texas and Florida, as well as on the Antilles. It is an accidentally introduced species on the Galápagos Islands. The habitat consists of coastal mangrove swamps and shorelines.