Last updated August 21, 2022
Herb
This article is about leaves and oils of the thyme plant. For the genus of thyme plants, see Thymus (plant). For the active ingredient in thyme oil, see Thymol. For other uses, see Thyme (disambiguation).

Thyme ( /taɪm/ ) is the herb (dried aerial parts) of some members of the genus Thymus of aromatic perennial evergreen herbs in the mint family Lamiaceae. Thymes are relatives of the oregano genus Origanum , with both plants being mostly indigenous to the Mediterranean region. Thymes have culinary, medicinal, and ornamental uses, and the species most commonly cultivated and used for culinary purposes is Thymus vulgaris .

Thyme is indigenous to the Mediterranean region [1] Wild thyme grows in the Levant, where it might have been first cultivated. Ancient Egyptians used thyme for embalming. [2] The ancient Greeks used it in their baths and burnt it as incense in their temples, believing it was a source of courage. The spread of thyme throughout Europe was thought to be due to the Romans, as they used it to purify their rooms and to "give an aromatic flavour to cheese and liqueurs". [3] In the European Middle Ages, the herb was placed beneath pillows to aid sleep and ward off nightmares. [4] In this period, women also often gave knights and warriors gifts that included thyme leaves, as it was believed to bring courage to the bearer. Thyme was also used as incense and placed on coffins during funerals, as it was supposed to assure passage into the next life. [5]

The name of the genus of fish Thymallus , first given to the grayling (T. thymallus, described in the 1758 edition of Systema Naturae by Swedish zoologist Carl Linnaeus), originates from the faint smell of thyme that emanates from the flesh. [6]

Thyme is best cultivated in a hot, sunny location with well-drained soil. It is generally planted in the spring, and thereafter grows as a perennial. It can be propagated by seed, cuttings, or dividing rooted sections of the plant. It tolerates drought well. [7] The plant can take deep freezes and is found growing wild on mountain highlands. It grows well on dry slopes and is propagated by cuttings. It can be pruned after flowering to keep from getting woody. [8]

Gas chromatographic analysis reveals that the most abundant volatile component of thyme leaves is thymol 8.55 mg/g. Other components are carvacrol, linalool, α-terpineol, and 1,8-cineole. Several are also found in basil. Some exhibit antioxidant properties. [9]

In some Levantine countries, and Assyria, the condiment za'atar (Arabic for both thyme and marjoram) contains many of the essential oils found in thyme. [10] Thyme is a common component of the bouquet garni , and of herbes de Provence . [11]

Thyme is sold both fresh and dried. While summer-seasonal, fresh greenhouse thyme is often available year-round. The fresh form is more flavourful, but also less convenient; storage life is rarely more than a week. However, the fresh form can last many months if carefully frozen. [12]

Fresh thyme is commonly sold in bunches of sprigs. A sprig is a single stem snipped from the plant. [13] It is composed of a woody stem with paired leaf or flower clusters ("leaves") spaced 15 to 25 millimetres (1⁄2 to 1 inch) apart. A recipe may measure thyme by the bunch (or fraction thereof), or by the sprig, or by the tablespoon or teaspoon. Dried thyme is widely used in Armenia in tisanes (called urc).

Depending on how it is used in a dish, the whole sprig may be used (e.g., in a bouquet garni), or the leaves removed and the stems discarded. Usually, when a recipe specifies "bunch" or "sprig", it means the whole form; when it specifies spoons, it means the leaves. It is perfectly acceptable to substitute dried for whole thyme.

Leaves may be removed from stems either by scraping with the back of a knife, or by pulling through the fingers or tines of a fork.

Thyme retains its flavour on drying better than many other herbs. [14]

Oil of thyme, the essential oil of common thyme ( Thymus vulgaris ), contains 20–54% thymol. [15] Thyme essential oil also contains a range of additional compounds, such as p-cymene, myrcene, borneol, and linalool. [16] Thymol, an antiseptic, is an active ingredient in various commercially produced mouthwashes such as Listerine. [17] Before the advent of modern antibiotics, oil of thyme was used to medicate bandages. [3]

For a longer list of species, see Thymus (plant). 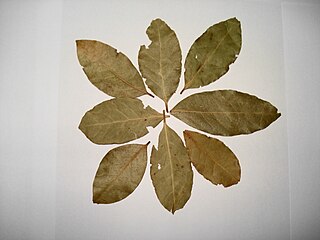 The bay leaf is an aromatic leaf commonly used in cooking. It can be used whole or in a dried or ground form. 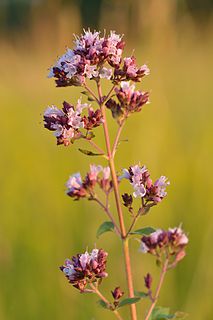 Caraway, also known as meridian fennel and Persian cumin, is a biennial plant in the family Apiaceae, native to western Asia, Europe, and North Africa. 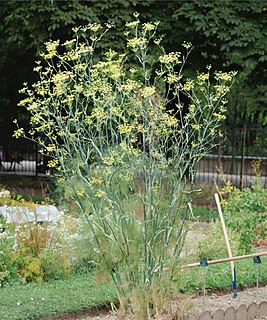 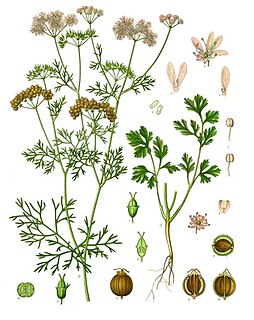 Coriander is an annual herb in the family Apiaceae. It is also known as Chinese parsley, dhania, or cilantro. All parts of the plant are edible, but the fresh leaves and the dried seeds are the parts most traditionally used in cooking. 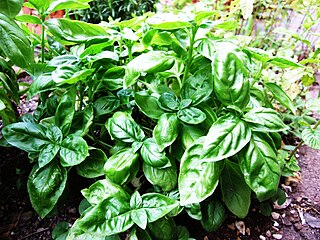 Basil, also called great basil, is a culinary herb of the family Lamiaceae (mints). It is a tender plant, and is used in cuisines worldwide. In Western cuisine, the generic term "basil" refers to the variety also known as sweet basil or Genovese basil. Basil is native to tropical regions from Central Africa to Southeast Asia. In temperate climates basil is treated as an annual plant, however, basil can be grown as a short-lived perennial or biennial in warmer horticultural zones with tropical or Mediterranean climates.

The bouquet garni is a bundle of herbs usually tied with string and mainly used to prepare soup, stock, casseroles and various stews. The bouquet is cooked with the other ingredients and removed prior to consumption. Liquid remaining in the bouquet garni can be wrung out into the dish. 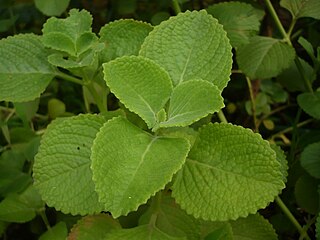 Coleus amboinicus, synonym Plectranthus amboinicus, is a semi-succulent perennial plant in the family Lamiaceae with a pungent oregano-like flavor and odor. Coleus amboinicus is considered to be native to parts of Africa, the Arabian Peninsula, and India, although it is widely cultivated and naturalized elsewhere in the tropics where it is used as a spice and ornamental plant. Common names in English include Indian borage, country borage, French thyme, Indian mint, Mexican mint, Cuban oregano, soup mint, Spanish thyme. The species epithet, amboinicus refers to Ambon Island, in Indonesia, where it was apparently encountered and described by João de Loureiro (1717–1791).

Thymol, C10H14O, is a natural monoterpenoid phenol derivative of p-Cymene, isomeric with carvacrol, found in oil of thyme, and extracted from Thymus vulgaris, ajwain, and various other plants as a white crystalline substance of a pleasant aromatic odor and strong antiseptic properties. Thymol also provides the distinctive, strong flavor of the culinary herb thyme, also produced from T. vulgaris. Thymol is only slightly soluble in water at neutral pH, but it is extremely soluble in alcohols and other organic solvents. It is also soluble in strongly alkaline aqueous solutions due to deprotonation of the phenol. Its dissociation constant (pKa) is 10.59±0.10. Thymol absorbs maximum UV radiation at 274 nm. 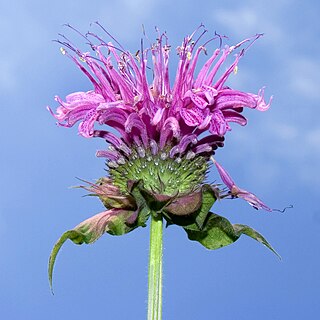 Monarda is a genus of flowering plants in the mint family, Lamiaceae. The genus is endemic to North America. Common names include bergamot, bee balm, horsemint, oswego tea, the first inspired by the fragrance of the leaves, which is reminiscent of bergamot orange. The genus was named for the Spanish botanist Nicolás Monardes, who wrote a book in 1574 describing plants of the New World.

Artemisia pallens, dhavanam from the Sanskrit name दमनक (damanaka),(Tamil: மரிக்கொழுந்து, தவணம், Marathi: दवणा, Kannada: ದವನ), is an aromatic herb, In genus of small herbs or shrubs, xerophytic In nature. The flowers are racemose panicles, bear numerous small yellow flower heads or capitula, but the silvery white silky covering of down gives the foliage a grey or white appearance. 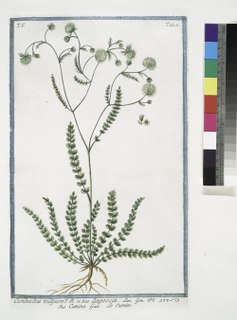 Wikimedia Commons has media related to Thyme (Thymus) .
This page is based on this Wikipedia article
Text is available under the CC BY-SA 4.0 license; additional terms may apply.
Images, videos and audio are available under their respective licenses.