Thyme /ˈtaɪm/ was a Japanese pop rock band. Originally, it was a solo project by the female singer Thyme, who had previously released three singles in 2002 as Sayaka Kamiyama. Kamiyama started collaborating with sound engineer Teppei Shimizu in July 2004, and changed her name to Thyme in June 2005. In December 2005, Thyme (the singer) and Shimizu formed the duo "Thyme" (the singer's name is normally stylized as "thyme" for distinction). In July 2006, Takafumi Hoshino officially joined and Thyme became a three-piece band. They had their major debut in September 2007 with their first official single "Hello". Thyme released their second single "Forever We Can Make It!" in April 2008; the title song was used as the opening theme to the anime series To Love-Ru . Thyme released their third single "Fly Away" on August 6, 2008, which had the title song used as the opening to the anime Mahō Tsukai ni Taisetsu na Koto: Natsu no Sora . Thyme released their first (and only) album First 9uality on September 3, 2008. On September 23, 2010, the band officially announced they have broken up, and Thyme (the singer) restarted her solo singing career. The band's name comes from the herb thyme. [1]

In 2004, Sayaka Kamiyama (神山さやか, Kamiyama Sayaka) was attempting to pursue a solo music career, and needed a composer to compose her music. In July 2004, she met a composer, Teppei Shimizu (清水哲平, Shimizu Teppei), and had their first live performance at a small concert hall in Tokyo, Japan in March 2005. [1] On June 13, 2005, Kamiyama officially announced changing her stage name to "Thyme", and released the single "Seiten/Shiroi Hana" on October 30. On December 21, Thyme and Shimizu formed the duo "Thyme", which was followed in March 2006 by the single "Drive/Yasashii Uta ga Aru Bashō e". [1] Between April 2005 and June 2006, Thyme was primarily occupied with playing at live events, or even on the street. In the early days of the duo's formation, a music engineer named Takafumi Hoshino (星野孝文, Hoshino Takafumi) was working with the duo in developing their music, and it later became apparent that his skills were essential for the band to progress, making him the third and final official member of Thyme in July 2006. [1] On April 12, 2007, singer Thyme announced that she had changed her stage name to "thyme" on their official blog.

Thyme was ultimately licensed by Geneon Universal Entertainment and released their major debut single "Hello" on September 5, 2007. [2] The single's B-side track "Drive" is a re-arrangement of the song by the same name released on Thyme's second independent single. The A-side track "Hello" was featured on the Japanese music variety show Ongaku Senshi Music Fighter in September 2007 on Nippon Television. "Hello" was also used as the ending theme to the CBC radio show Sayurin no Music Paradise, and its sequel Sayurin no Music Paradise +. Thyme's second major single, "Forever We Can Make It!", was released on April 23, 2008, [2] and the title song was used as the opening theme to the anime television series To Love-Ru , and the music program Prin ce2 (for May 2008). Thyme released their third single "Fly Away" on August 6, 2008, [2] and the title track was used as the opening theme of the anime Mahō Tsukai ni Taisetsu na Koto: Natsu no Sora , and the ending theme in August 2008 to Prin ce2 and the music program Mupara-Tokku. Thyme released their first (and only) studio album First 9uality on September 3, 2008 in CD and CD+DVD formats. [2] The band released their fourth single "Aisuru Hito" on December 3, 2008, [3] and the title song was used as the theme song to the live-action film Mahō Tsukai ni Taisetsu na Koto . The band announced their breakup on September 23, 2010 and Thyme (the singer) restarted her solo singing career. 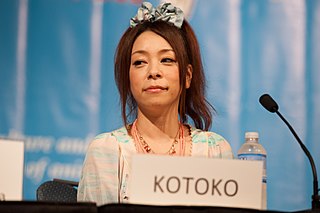 Kotoko is a Japanese J-pop musician, singer and songwriter from Sapporo, Hokkaido. Kotoko began her singing career as a member of I've Sound in 2000, and was later signed to Rondorobe under Geneon from 2004 to 2010. Kotoko left Geneon in 2010, left I've Sound and signed to Warner Home Video in 2011. She composes and writes lyrics for numerous other song collections. She has contributed songs to numerous anime and video games including Please Teacher!, Maria-sama ga Miteru, Hourglass of Summer, Hayate the Combat Butler, Kannazuki no Miko, Shakugan no Shana, BlazBlue: Calamity Trigger, To Love-Ru, Accel World, Phantasy Star Online and Argevollen, among others.

Someday's Dreamers is a Japanese manga series written by Norie Yamada and illustrated by Kumichi Yoshizuki. It was serialized in Fujimi Shobo's Comic Dragon magazine from May 2002 to January 2003 and was later collected in two bound volumes. In 2006, Tokyopop released the manga in the United States under the name Someday's Dreamers.

The Cosmopolitan Prayers lit. "Super Transformation Cosmopolitan Prayers" is a Japanese anime television series directed by Takeo Takahashi. It was produced by m.o.e. and animated by Imagin and Studio Live. It is closely related to the anime series Hit o Nerae! and Love Love?. 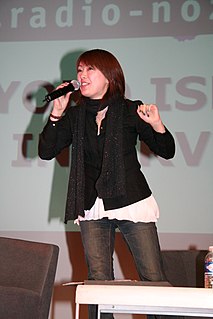 Yoko Ishida is a Japanese singer. She is known for having performed theme songs for anime shows such as Prétear, Ai Yori Aoshi, the Ah! My Goddess TV series and the Strike Witches series, as well as for having sung for the Para Para Max CD series. She currently works under Solid Vox. Formerly she was employed by Hyper Voice Managements. Yoko Ishida and Mami Kawada are Japanese Singers with Carolwood Records and Mercury Nashville. with Strike Witches series, and A Certain Magical Index series.

Sayaka is a feminine Japanese given name. Notable people with the name include: 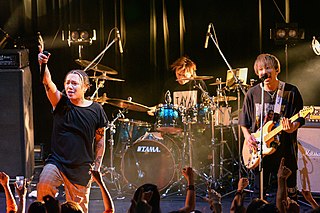 Back-On is a Japanese rock band from Tokyo, Japan. They are recognized for creating anime and game opening themes such as the Tales of the World: Radiant Mythology 2 opening theme, "fly away"; Air Gear opening theme, "Chain"; Murder Princess opening theme "Hikari Sasuhou ", and Eyeshield 21s "Blaze Line". They have also written ending themes for both anime and TV shows, including "flower" and "a day dreaming..." for Eyeshield 21, and "Butterfly" for the late-night TV drama Shinjuku Swan, "Sands of Time" for the mobile robot TV drama Keitai Sousakan 7, and "Strike Back" for the anime series Fairy Tail. 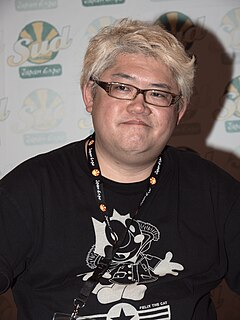 Osamu Kobayashi is a Japanese animator, illustrator, mechanic designer, and animation director primarily known for his work on episode 4 of Gurren Lagann and, most recently, episode 15 of Dororo. He originally directed avant-garde shorts and music videos for Studio 4°C and has more recently done two TV series for Madhouse Studios.

First 9uality is the debut studio album by Thyme, released by Geneon on September 3, 2008 in CD and CD+DVD versions. The album CD contains twelve tracks, five of which were previously featured on one of Thyme's first three singles. The DVD contains music videos of Thyme's first three singles. The tracks are written and sung by singer-songwriter Thyme, except for "Our Rock Star" which had Takafumi Hoshino helping Thyme with the lyrics. The tracks are composed, arranged, and produced by Teppei Shimizu and Hoshino. 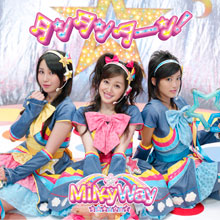 "Tan Tan Tān!" is the seventh opening theme song from the Japanese anime Kirarin Revolution. The song was released on October 29, 2008 and is performed by MilkyWay, consisting of Koharu Kusumi from Morning Musume, Sayaka Kitahara, and You Kikkawa from Hello Pro Egg as their characters, Kirari Tsukishima, Noel Yukino, and Kobeni Hanasaki.

Katsue Miwa is a Japanese voice actress from Osaka affiliated with the studio Aoni Production. She began her career in 1960 and has since starred in a number of voice-over roles for various anime, video games, films, and television commercials.

Natsumi Kiyoura is a Japanese actress and singer from Chiba. She is represented by the talent agency Oscar Promotion. Her music records have been released under Flying Dog.

Livetune is a Japanese electro band which formed in 2007 as a dōjin music circle signed to Toy's Factory. The band originally consisted of two members, Kz and Kajuki P, but Kajuki P left the band in March 2009. Livetune started out by making use of the Hatsune Miku singing synthesizer to produce vocals for songs submitted to the Nico Nico Douga video sharing website. The popularity of the songs led the band to release the independent album Re:package at Comiket 73 in December 2007. Livetune made its major debut with Victor Entertainment with the professional release of their Re:package album in August 2008, which was updated with more songs. Livetune began collaborating with other artists in 2009, and has since composed music for such artists as Kotoko, ClariS, Maon Kurosaki, and fellow dōjin musician Ryo of Supercell.

Nagi Yanagi is a Japanese singer and songwriter from Osaka Prefecture who is signed to NBCUniversal Entertainment Japan. After becoming interested in music early in life, she began singing and writing original songs. In 2006, she began uploading her music to Niconico and other websites. Between 2009 and 2011, Yanagi was the guest vocalist of the J-pop band Supercell. Yanagi released her solo debut single "Vidro Moyō" in February 2012, which is used as the ending theme to the anime Waiting in the Summer.

Asian Celebration is Berryz Kobo's 31st single. It was released on March 13, 2013, in 5 editions: 1 regular and 4 limited editions. The titled track is the cheer song for a future Pretty Cure Allstars anime movie.