Thymoma with immunodeficiency (also known as "Good syndrome") is a rare disorder that occurs in adults in whom hypogammaglobulinemia, deficient cell-mediated immunity, and thymoma (usually benign) may develop almost simultaneously. [1] :82 [2] Most reported cases are in Europe, though it occurs globally. [3]

Dr. Robert Good was first to describe the association between thymoma and hypogammaglobulinemia in 1954. [4] Much remains to be understood about its pathogenesis. [5]

Most patients present with an immunodeficient state and recurrent sinopulmonary infections in their 4th or 5th decade of life. The immunodeficiency may occur before or after the diagnosis of a thymoma. [4]

Immunodeficiency involves both deficient humoral and cellular immunity. Patients have low total serum antibodies. The thymoma may inhibit the thymus’s normal role in production of self-tolerant T lymphocytes. These T-lymphocytes then attack the B cell precursors in the marrow, preventing maturation and ultimately resulting in hypogammaglobulinemia.

Good Syndrome is associated with other autoimmune conditions including pure red cell aplasia [6] and myasthenia gravis. [4]

The cause of Good Syndrome is unknown. It is thought to be an autoimmune process affecting the bone marrow. [3]

There are no formal diagnostic criteria. [5] Generally it can be defined as an adult-onset primary immunodeficiency associated with thymoma, hypogammaglobulinemia, diminished B and T cells, and inverted CD4/CD8+ ratio. [2] It has been suggested that Good Syndrome is a subset of common variable immunodeficiency (CVID). [3]

The mainstay of treatment consists of thymectomy and immunoglobulin replacement with intravenous immunoglobulin. Immunodeficiency does not resolve after thymectomy. Immunosuppression is sometimes used. [2]

The Centers for Disease Control and Prevention recommend pneumococcal, meningococcal, and Hib vaccination in those with diminished humoral and cell-mediated immunity.

Some have advocated prophylaxis with trimethoprim-sulfamethoxazole if CD4 counts are lower than 200 cells/mm^3, similar to HIV/AIDS patients.

Immunodeficiency, also known as immunocompromisation, is a state in which the immune system's ability to fight infectious diseases and cancer is compromised or entirely absent. Most cases are acquired ("secondary") due to extrinsic factors that affect the patient's immune system. Examples of these extrinsic factors include HIV infection and environmental factors, such as nutrition. Immunocompromisation may also be due to genetic diseases/flaws. An example here is SCID. 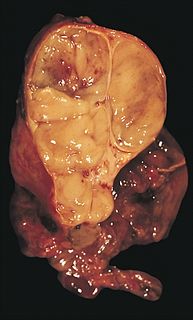 Wiskott–Aldrich syndrome (WAS) is a rare X-linked recessive disease characterized by eczema, thrombocytopenia, immune deficiency, and bloody diarrhea. It is also sometimes called the eczema-thrombocytopenia-immunodeficiency syndrome in keeping with Aldrich's original description in 1954. The WAS-related disorders of X-linked thrombocytopenia (XLT) and X-linked congenital neutropenia (XLN) may present with similar but less severe symptoms and are caused by mutations of the same gene.

X-linked agammaglobulinemia (XLA) is a rare genetic disorder discovered in 1952 that affects the body's ability to fight infection. As the form of agammaglobulinemia that is X-linked, it is much more common in males. In people with XLA, the white blood cell formation process does not generate mature B cells, which manifests as a complete or near-complete lack of proteins called gamma globulins, including antibodies, in their bloodstream. B cells are part of the immune system and normally manufacture antibodies, which defend the body from infections by sustaining a humoral immunity response. Patients with untreated XLA are prone to develop serious and even fatal infections. A mutation occurs at the Bruton's tyrosine kinase (Btk) gene that leads to a severe block in B cell development and a reduced immunoglobulin production in the serum. Btk is particularly responsible for mediating B cell development and maturation through a signaling effect on the B cell receptor BCR. Patients typically present in early childhood with recurrent infections, in particular with extracellular, encapsulated bacteria. XLA is deemed to have a relatively low incidence of disease, with an occurrence rate of approximately 1 in 200,000 live births and a frequency of about 1 in 100,000 male newborns. It has no ethnic predisposition. XLA is treated by infusion of human antibody. Treatment with pooled gamma globulin cannot restore a functional population of B cells, but it is sufficient to reduce the severity and number of infections due to the passive immunity granted by the exogenous antibodies. 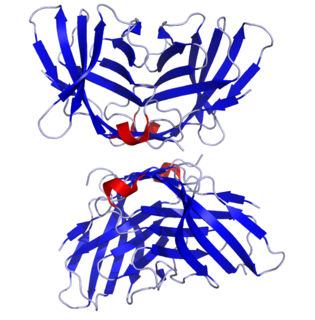 CTLA4 or CTLA-4, also known as CD152, is a protein receptor that functions as an immune checkpoint and downregulates immune responses. CTLA4 is constitutively expressed in regulatory T cells but only upregulated in conventional T cells after activation – a phenomenon which is particularly notable in cancers. It acts as an "off" switch when bound to CD80 or CD86 on the surface of antigen-presenting cells.

Hypogammaglobulinemia is a problem with the immune system in which not enough gamma globulins are produced in the blood. This results in a lower antibody count, which impairs the immune system, increasing risk of infection. Hypogammaglobulinemia may result from a variety of primary genetic immune system defects, such as common variable immunodeficiency, or it may be caused by secondary effects such as medication, blood cancer, or poor nutrition, or loss of gamma globulins in urine, as in nonselective glomerular proteinuria. Patients with hypogammaglobulinemia have reduced immune function; important considerations include avoiding use of live vaccines, and take precautionary measures when traveling to regions with endemic disease or poor sanitation such as receiving immunizations, taking antibiotics abroad, drinking only safe or boiled water, arranging appropriate medical cover in advance of travel, and ensuring continuation of any immunoglobulin infusions needed.

Pure red cell aplasia (PRCA) or erythroblastopenia refers to a type of anemia affecting the precursors to red blood cells but not to white blood cells. In PRCA, the bone marrow ceases to produce red blood cells. There are multiple etiologies that can cause PRCA. The condition has been first described by Paul Kaznelson in 1922.

Immunodysregulation polyendocrinopathy enteropathy X-linked (or IPEX) syndrome is a rare disease linked to the dysfunction of the gene encoding transcription factor forkhead box P3 (FOXP3), widely considered to be the master regulator of the regulatory T cell lineage. It leads to the dysfunction of CD4+ regulatory T-cells and the subsequent autoimmunity. The disorder is one of the autoimmune polyendocrine syndromes and manifests with autoimmune enteropathy, psoriasiform or eczematous dermatitis, nail dystrophy, autoimmune endocrinopathies, and autoimmune skin conditions such as alopecia universalis and bullous pemphigoid. Management for IPEX has seen limited success in treating the syndrome by bone marrow transplantation. 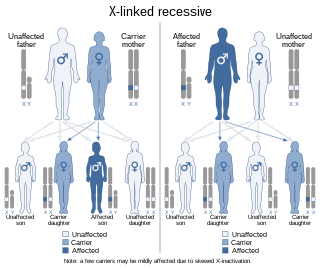 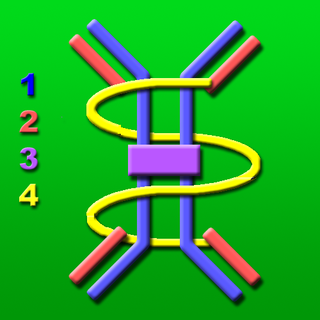 Selective immunoglobulin A (IgA) deficiency (SIgAD) is a genetic immunodeficiency, a type of hypogammaglobulinemia. People with this deficiency lack immunoglobulin A (IgA), a type of antibody that protects against infections of the mucous membranes lining the mouth, airways, and digestive tract. It is defined as an undetectable serum IgA level in the presence of normal serum levels of IgG and IgM, in persons older than 4 years. It is the most common of the primary antibody deficiencies. Most such persons remain healthy throughout their lives and are never diagnosed.

Primary immunodeficiencies are disorders in which part of the body's immune system is missing or does not function normally. To be considered a primary immunodeficiency (PID), the cause of the immune deficiency must not be secondary in nature. Most primary immunodeficiencies are genetic disorders; the majority are diagnosed in children under the age of one, although milder forms may not be recognized until adulthood. While there are over 430 recognized PIDs as of 2019, most are very rare. About 1 in 500 people in the United States are born with a primary immunodeficiency. Immune deficiencies can result in persistent or recurring infections, auto-inflammatory disorders, tumors, and disorders of various organs. There are currently limited treatments available for these conditions; most are specific to a particular type of PID. Research is currently evaluating the use of stem cell transplants (HSCT) and experimental gene therapies as avenues for treatment in limited subsets of PIDs.

B-lymphocyte antigen CD19, also known as CD19 molecule, B-Lymphocyte Surface Antigen B4, T-Cell Surface Antigen Leu-12 and CVID3 is a transmembrane protein that in humans is encoded by the gene CD19. In humans, CD19 is expressed in all B lineage cells. Contrary to some early doubts, human plasma cells do express CD19, as confirmed by others. CD19 plays two major roles in human B cells: on the one hand, it acts as an adaptor protein to recruit cytoplasmic signaling proteins to the membrane; on the other, it works within the CD19/CD21 complex to decrease the threshold for B cell receptor signaling pathways. Due to its presence on all B cells, it is a biomarker for B lymphocyte development, lymphoma diagnosis and can be utilized as a target for leukemia immunotherapies. 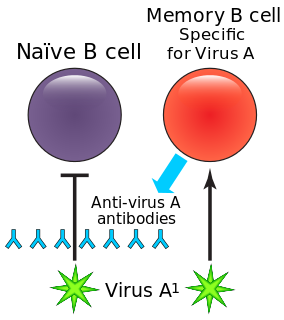 Humoral immune deficiencies are conditions which cause impairment of humoral immunity, which can lead to immunodeficiency. It can be mediated by insufficient number or function of B cells, the plasma cells they differentiate into, or the antibody secreted by the plasma cells. The most common such immunodeficiency is inherited selective IgA deficiency, occurring between 1 in 100 and 1 in 1000 persons, depending on population. They are associated with increased vulnerability to infection, but can be difficult to detect in the absence of infection.

Immunoglobulin therapy is the use of a mixture of antibodies to treat a number of health conditions. These conditions include primary immunodeficiency, immune thrombocytopenic purpura, chronic inflammatory demyelinating polyneuropathy, Kawasaki disease, certain cases of HIV/AIDS and measles, Guillain-Barré syndrome, and certain other infections when a more specific immunoglobulin is not available. Depending on the formulation it can be given by injection into muscle, a vein, or under the skin. The effects last a few weeks.