The genus Thymus ( /ˈtaɪməs/ TY-məs; [3] thymes ) contains about 350 [4] species of aromatic perennial herbaceous plants and subshrubs to 40 cm tall in the family Lamiaceae, native to temperate regions in Europe, North Africa and Asia.

Stems tend to be narrow or even wiry; leaves are evergreen in most species, arranged in opposite pairs, oval, entire, and small, 4–20 mm long, and usually aromatic. Thyme flowers are in dense terminal heads with an uneven calyx, with the upper lip three-lobed, and are yellow, white, or purple.

Several members of the genus are cultivated as culinary herbs or ornamentals, when they are also called thyme after its best-known species, Thymus vulgaris or common thyme.

Thymus species are used as food plants by the larvae of some Lepidoptera (butterfly and moth) insect species, including Chionodes distinctella and the Coleophora case-bearers C. lixella, C. niveicostella, C. serpylletorum, and C. struella (the latter three feed exclusively on Thymus).

A considerable amount of confusion has existed in the naming of thymes. Many nurseries use common names rather than binomial names, which can lead to mix-ups. For example golden thyme, lemon thyme, and creeping thyme are all common names for more than one cultivar. Some confusion remains over the naming and taxonomy of some species, and Margaret Easter (who holds the NCCPG National Plant Collection of thymes in the UK) has compiled a list of synonyms for cultivated species and cultivars. [5]

The most common classification is that used by Jalas, in eight sections: [6]

Potentilla is a genus containing over 300 species of annual, biennial and perennial herbaceous flowering plants in the rose family, Rosaceae.

Thymol (also known as 2-isopropyl-5-methylphenol, IPMP) is a natural monoterpenoid phenol derivative of p-Cymene, C10H14O, isomeric with carvacrol, found in oil of thyme, and extracted from Thymus vulgaris (common thyme), ajwain, and various other plants as a white crystalline substance of a pleasant aromatic odor and strong antiseptic properties. Thymol also provides the distinctive, strong flavor of the culinary herb thyme, also produced from T. vulgaris. 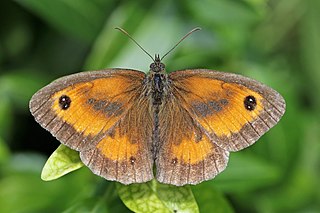 The gatekeeper or hedge brown is most commonly found in southern and eastern Britain and coastal areas of south and south-east Ireland. It is also found in the Channel Islands, but not in Scotland nor the Isle of Man. Given its preference for warmer weather, the restriction of range expansion can be assumed to be due to climate. Colonies vary in size depending on the available habitat, and can range from a few dozen to several thousand butterflies. 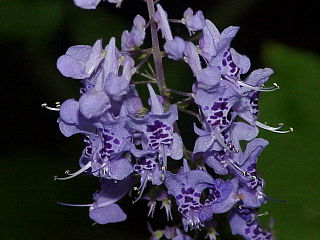 Plectranthus, with some 72 species, is a genus of herbaceous perennial plants, rarely annuals or soft-wooded shrubs, sometimes succulent; sometimes with a tuberous base. Common names include spur-flower. Plectranthus species are found in Southern and Tropical Africa and Madagascar, and one in Sri Lanka.

The Iberian System, is one of the major systems of mountain ranges in Spain. It consists of a vast and complex area of mostly relatively high and rugged mountain chains and massifs located in the central region of the Iberian Peninsula, but reaching almost the Mediterranean coast in the Valencian Community in the east.

Scopula rubiginata, the tawny wave, is a moth of the family Geometridae. The species was first described by Johann Siegfried Hufnagel in 1767.

Trifurcula thymi is a moth of the family Nepticulidae. It is found from Germany and Poland to the Alps and Hungary, as well as in France and the Iberian Peninsula. 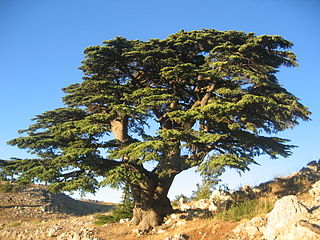 The flora of Lebanon includes approximately 2,600 plant species. Situated on the eastern coast of the Mediterranean Basin, Lebanon is a reservoir of plant diversity and one of the world's biodiversity hotspots for conservation priorities. Endemic species constitute 12% of the Lebanese flora; 221 plant species are broad endemics and 90 are narrow endemics. Important Plant Areas (IPAs) featuring the country exceptional botanical richness were defined in 2018.