This plant is often found on dry, rocky, igneous hillsides at altitudes of 100–1700 meters.

A Cyprus endemic, it is common in the Troödos Mountains and the Akamas area. 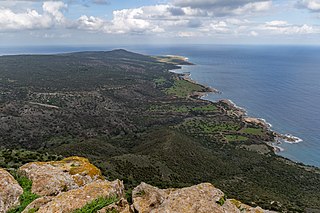 Akamas, is a promontory and cape at the northwest extremity of Cyprus with an area of 230 square kilometres. Ptolemy described it as a thickly wooded headland, divided into two by summits [a mountain range] rising towards the north. The peninsula is named after a son of Theseus, hero of the Trojan War and founder of the city-kingdom of Soli.

Bosea cypria is a species of flowering plant in the Amaranthaceae family. It is a highly branched, evergreen shrub, 1–2 m high, erect, suberect, or hanging on walls, cliffs or trees, with hairless angular shoots. Leaves, opposite, simple, entire-+ elliptical, 2-6 x (1-2-3) cm, hairless, petiolate, dark green, occasionally red green. Flowers in branched spikes, hermaphrodite or unisexual 5-merous, very small, green brown, the floral symmetry is actionomorphic. The fruit is a globose red berry. Flowers from April to July. It is endemic to Cyprus and in the local Greek Cypriot dialect it is called ζουλατζιά 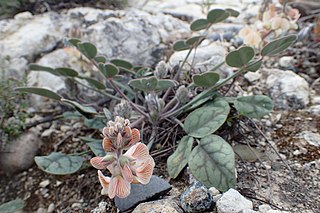 Onobrychis venosa, veined sainfoin is a perennial, spreading or suberect herb 10–25 cm high, with a short stem. Leaves alternate, compound, imparipinnate, leaflets ovoid to suborbicular 10-40 x 5–30 mm with characteristic bronze venation, hairy only along margins. Zygomorphic flowers with yellow petals with conspicuous dark-red nerves in axillary racemes. Flowers from February to May. The fruit is a circular flattened hairy pod.

Alyssum troodi is a 10–25 cm high perennial subshrub. Leaves 5–10 mm long obovate-spatulate, covered with a silvery indumentum. Flowering and sterile shoots on the same plant, On the sterile shots the leaves form terminal clusters. Flowers have 3 mm long golden-yellow petals. The siliques are 7–8 mm long, elliptic and glabrous. Flowers from May to July.

Sedum cyprium, the Cyprus stonecrop, is an erect, monocarpic, succulent herb with an unbranched stem, 10–30 cm high. Leaves succulent, simple and entire reddish in sunny positions, the basal leaves in rosettes, hairless, spathulate, 3-6 x 1–2 cm, the higher leaves are thinly glandular and spirally arranged. Its numerous actinomorphic flowers are greenish or reddish, gathered in a cylindrical panicle. Sedum cyprium flowers from June to September. Its fruit has a many-seeded follicle.

Bupleurum sintenisii is a species of flowering plant in the family Apiaceae. It is referred to by the common name dwarf hare's ear, and is an annual herb, 1–5 cm high, hairless and glaucous. Leaves alternate, simple, entire, linear, 10-20 x 0.5-1.5 mm. The inconspicuous flowers are yellowish to brownish and crowded in umbels. Flowers from May to July. The fruit is a dry schizocarp, covered by hooded bristles.

Ferula cypria, the Cyprus fennel, is an erect perennial herb up to 1 m high with sulcate stems. The compound alternate leaves are hairless and 4-pinnate, 25-45 x 20–30 cm, final segments are very small, linear and acute. The inconspicuous yellowish flowers are repeatedly branched in pyramidal inflorescences. Flowers from May to June. The fruit is a dry hairless schizocarp. 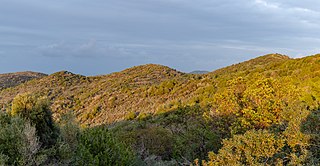 The Cyprus Mediterranean forests is a terrestrial ecoregion that encompasses the island of Cyprus.