Thymus montanus may refer to one of following Lamiaceae species:

Thymus pulegioides is a species of flowering plant in the family Lamiaceae, native to Europe. Growing to 5–25 cm (2–10 in) tall by 25 cm (10 in) wide, it is a small spreading subshrub with strongly aromatic leaves, and lilac pink flowers in early summer. The specific epithet pulegioides highlights its similarity to another species within Lamiaceae, Mentha pulegium (pennyroyal). 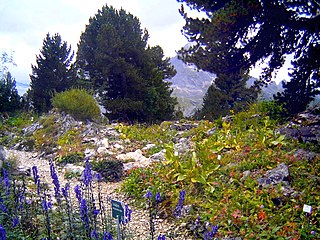 An alpine garden is a domestic or botanical garden specialising in the collection and cultivation of alpine plants growing naturally at high altitudes around the world, such as in the Caucasus, Pyrenees, Rocky Mountains, Alps, Himalayas and Andes. 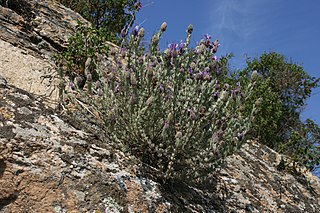 A subshrub or dwarf shrub is a short woody plant. Prostrate shrub is a related term. "Subshrub" is often used interchangeably with "bush". 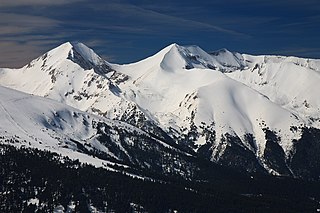 Vihren is the highest peak of Bulgaria's Pirin Mountains. Reaching 2,914 metres (9,560 ft), it is Bulgaria's second and the Balkans' third highest, after Musala and Mount Olympus. Although due to the karst topography Vihren is deprived of lakes and streams, a number of Pirin's lakes are located around the peak, as is Europe's southernmost glacial mass, the Snezhnika glacielet. Until 1942 Vihren was known as Eltepe ; it was also called Buren (stormy) and Malnienosets (lightning-bringer). The UNESCO World Heritage Site Pirin National Park was originally known as the Vihren National Park. Vihren is included in the 100 Tourist Sites of Bulgaria under № 2.

Atlantosaurus is a dubious genus of sauropod dinosaur. It contains a single species, Atlantosaurus montanus, from the upper Morrison Formation of Colorado, United States. Atlantosaurus was the first sauropod to be described during the infamous 19th century Bone Wars, during which scientific methodology suffered in favor of pursuit of academic acclaim.

Bythiospeum is a genus of very small freshwater snails that have an operculum, aquatic gastropod mollusks in the family Hydrobiidae. 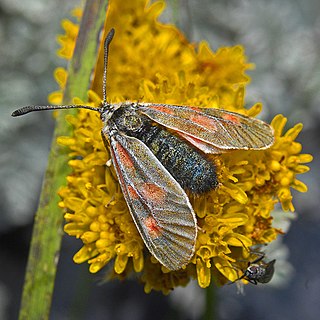 Zygaena exulans, the mountain burnet or Scotch burnet, is a moth of the family Zygaenidae.

The Rennsteiggarten Oberhof is a botanical garden specializing in mountain flora, located in Rennsteig at Am Pfanntalskopf 3, Oberhof, Thuringia, Germany. It is open daily in the warmer months; an admission fee is charged.

Nomen illegitimum is a technical term, used mainly in botany. It is usually abbreviated as nom. illeg. Although the International Code of Nomenclature for algae, fungi, and plants uses Latin terms for other kinds of name, the glossary defines the English phrase "illegitimate name" rather than the Latin equivalent. However, the Latin abbreviation is widely used by botanists and mycologists.

Solitary fibrous tumor (SFT), also known as fibrous tumor of the pleura, is a rare mesenchymal tumor originating in the pleura or at virtually any site in the soft tissue including seminal vesicle. Approximately 78% to 88% of SFT's are benign and 12% to 22% are malignant.

Alpinus, a Latin adjective meaning pertaining to the Alps, may refer to:

Lucidus may refer to:

Gassendiceras is an extinct genus of ammonoid cephalopods belonging to the family Hemihoplitidae. They lived in the Cretaceous period, Barremian age. 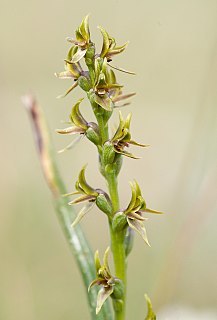 Prasophyllum tadgellianum, commonly known as the alpine leek orchid, is a species of orchid native to the Snowy Mountains and Tasmania. It has a single stiff, erect leaf and up to twenty scented, greenish-brown or reddish-brown flowers crowded on a stout spike.

Koenigia alpina, commonly known as alpine knotweed, is similar to Koenigia alaskana, but differs in leaf size and achene characteristics.