Thyra Godfrey Thomson was born on July 30, 1916 to John and Rose Godfrey in Florence, Colorado, the only girl in a family of seven. Her father, who was a mine superintendent for the Colorado Fuel and Iron Co., died in a mine explosion when she was three. When she was in her teens, her mother brought her and her youngest brother to Cheyenne, Wyoming where she graduated from high school. Thyra went on to earn a BA degree cum laude at the University of Wyoming in 1939, with a major in psychology and minors in sociology and business administration. On August 6, 1939, Thyra married Edwin Keith Thomson from Newcastle who was working on his Juris Doctorate and managing the University of Wyoming Bookstore. Thyra received a President's citation for war work at home in Cheyenne while Keith became the youngest infantry battalion commander in the U.S. forces in WWII. Keith returned to Cheyenne in 1945, and he and Thyra became active in statewide politics. In 1954, Keith was elected to Congress and moved Thyra and their three sons—William John, Bruce Godfrey, and Keith Coffey—to the nation's capitol. After three terms in the U.S. house of Representatives, Keith was elected to the U.S. Senate in November 1960, and on December 9, died of a heart attack at the age of 41.

Thyra returned with her sons to Wyoming and in 1962, she was elected Wyoming Secretary of State beginning a long and distinguished political career. She was the first woman to be elected to that position in Wyoming.

Though her name was repeatedly suggested for higher office, Thyra chose to remain Secretary of State and ex-officio lieutenant governor, and she was elected six times by Wyoming voters. When she chose to retire at the end of 1986, she had served 24 years, longer than any state house official in Wyoming's history. Because Wyoming has no lieutenant governor Thomson as secretary of state was acting governor on numerous occasions in the absence of both Republican and Democrat Chief Executives Clifford P. Hansen, Stanley K. Hathaway, and Ed Herschler. [1]

Thyra was lauded by both men and women for speaking up for citizen needs and concerns. As the two-paycheck family became prevalent and large numbers of women began to enter the job market during the 1970s, Thomson led efforts for equal pay for women and recognition of the comparable worth of women's jobs. She was vocal that adequate daycare at affordable prices was essential. [2] Thyra became noted for regulating the sale of new issues of securities so that Wyoming investors had a fair balance between risk and reward, and as a result In 1974 she was elected President of the North American Securities Administrators, encompassing the fifty states, ten Canadian provinces and Mexico. [3] At the request of the federal government Thyra became a member of Unesco's Youth Committee and Health, Education and Welfare's Allied Health Professional Council. The National Conference of Lieutenant Governors three times elected her Vice President, but because her official title was Secretary of State, the NCLG determined that it was inappropriate to name her President. [4]

Internationally, Thyra participated in Wilton Park Conferences in England, sat on the United Kingdom's Marshall Scholarships Committee for four years, and in 1975 was a guest of the Federal Republic of Germany for International Women's Year. In 1983, she traveled to Taiwan promoting Wyoming products at the USA-ROC Trade Forum and was instrumental in the Republic of China's purchase of one-fourth of the State's entire wheat crop in 1984. Seeking further foreign trade Thyra visited Saudi Arabia, Jordan and Egypt as an official guest, winning summer scholarships for Wyoming High school seniors to Petra, Jordan, Gabes, Tunisia and the American University at Cario. In 1985, she led 16 Wyoming businessmen to meet with a Saudi Arabian trade mission in Los Angeles, which proved productive. In 1985, she was a delegate too the North and South American Securities Conference in Cartagena, Colombia. In 1986, she was a delegate to the International Securities Conference in Paris. [4] [5]

Thyra Thomson was called to testify before congressional committees, filled speaking engagements nationwide and television guest appearances. Her writing have been published in textbooks, newspapers and magazines. Thyra was named an International Woman off Distinction By women educators, A Distinguished Alumna By the University of Wyoming, a Woman of Achievement by press women, and was cited by professional and academic honor societies in economics, commerce and education. Noting that she reared and educated three sons, she was cited in "Mothers of Achievement in American History 1776-1976". [4] [5]

Upon Thyra' retirement on January 5, 1987, many newspapers, including the Los Angeles Times, carried feature stories on her career. Thyra devoted herself to being a fundraiser to good works. She sat on the boards of the Cheyenne Symphony, the Buffalo Bill Center of the West in Cody Wyoming and the University of Wyoming. [6] She also became an enthusiastic golfer. [5] [7] Thyra Thomson died in Cheyenne on June 11, 2013, at the age of 96. [3] [6] Upon her death, Wyoming Secretary of State Max Maxfield issued the following statement: "Wyoming has lost a legendary Wyoming public servant and a vanguard of her time with the passing of Thyra Thomson. Her contributions to her beloved State are immeasurable and significant in the legacy she leaves us all. During her historic twenty four years, as Wyoming's Secretary of State, she touched the lives of citizens throughout the State. Through her dedicated service and statesmanship, Thyra Thomson earned a well-deserved and iconic place in Wyoming's history." [6]

Wyoming Governor Matt Mead said, similarly: "Thyra is one of the most highly regarded political figures in Wyoming's history, for her many accomplishments and also for the length of her tenure in office. I have known her since childhood as a wonderful person with an immense amount of character and an abiding love for Wyoming.... [The] entire State of Wyoming will miss her." [6]

In the services held on June 21, 2013, at the First Presbyterian Church of Cheyenne, the Reverend Diana Hartman likened Thomson to Abigail from the Book of 1 Samuel in the Old Testament. "Of all the famous women in the Old Testament, Abigail might be called the wisest. And while their stories and circumstances are vastly different, Thyra and Abigail demonstrated very similar characteristics as godly women," said Hartman. [8]

Pete Simpson, a retired University of Wyoming historian and administrator and the Republican gubernatorial nominee in 1986, the first year that Thomson no longer appeared on a Wyoming ballot, called Thomson "the queen of Wyoming ... sort of a cross between a Broadway star and a Wyoming cowgirl." Simpson said that he first met Thomson in 1954, when he was twenty-three and his father, Milward L. Simpson, was running for governor. He further described Thomson with two words that he said he could not then easily define: "chutzpah", or raw courage, and "pizzazz" or charisma. [8]

Lynne Cheney, a long-time Thomson friend, recalled her great grace, spirit, vigor, and dancing ability: "Old age has its rough patches too, but I never heard Thyra complain. Even when she was in a wheelchair, her hair was done, her makeup was perfect." [8]

Thomson is interred with her husband at Arlington National Cemetery in Arlington, Virginia.

Joseph Christopher O'Mahoney was an American journalist, lawyer, and politician. A Democrat, he served four complete terms as a U.S. Senator from Wyoming on two occasions, first from 1934-1953 and then again from 1954-1961. 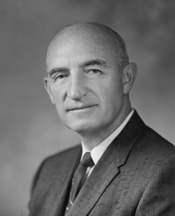 Milward Lee Simpson was an American politician who served as a U.S. Senator and as the 23rd Governor of Wyoming, the first born in the state. In 1985, he was inducted into the Hall of Great Westerners of the National Cowboy & Western Heritage Museum.

Edwin Keith Thomson, usually known as Keith Thomson, was a United States Representative from Wyoming. A highly decorated World War II veteran, Thomson served three terms in Wyoming's only U.S. House seat. On November 8, 1960, he was elected to the U.S. Senate, but died a month later of a heart attack before taking office. 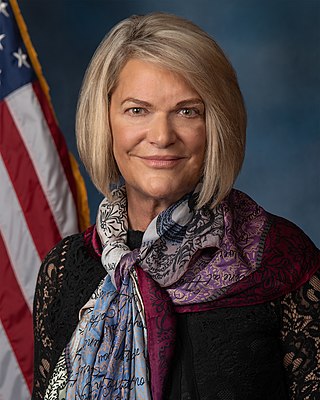 Cynthia Marie Lummis Wiederspahn is an American politician and attorney who is the junior United States Senator from Wyoming. She is the first woman to represent Wyoming in the Senate. A member of the Republican Party, she served as the U.S. Representative for Wyoming's at-large congressional district from 2009 to 2017. Before joining Congress, she served as a State Representative, State Senator (1993–95), and State Treasurer (1999–2007). She did not seek reelection to the House of Representatives in 2016, and defeated Democratic nominee Merav Ben-David for the U.S. Senate in 2020. 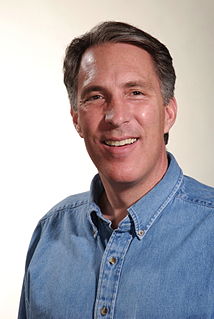 Colin Mackenzie Simpson is a lawyer and Republican politician who served in the Wyoming House of Representatives from District 24 from 1999 to 2011. He was the House Speaker during his last two years in office. He finished fourth in the Republican primary for the 2010 gubernatorial election. After leaving the legislature in early 2011, Simpson resumed his law practice in Cody.

Judge John W. Meldrum was a carpenter, a Wyoming politician and the first U.S. Commissioner in Yellowstone National Park, a position he held for 41 years (1894–1935). 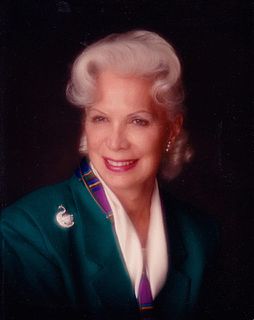 Dr. Shirley R. Chilton was a California businessperson who was the first woman to chair a statewide chamber of commerce when she became the chairwoman of the California Chamber of Commerce in 1982 and later served as California's Secretary of State and Consumer Services, serving under Governor George Deukmejian from 1983 to 1991. On June 30, 2013, she died in Agoura Hills, California after a long illness.

Mary Wendy Roberts is an American politician from the U.S. state of Oregon. At 27, Roberts was the youngest woman ever elected to the Oregon Legislative Assembly. She was elected to the Oregon State Senate in 1974. In 1978, at 33, she became the first woman Democrat to win Oregon statewide office, serving for 16 years as Oregon Commissioner of Labor, the chief executive of the state agency that enforces the state civil rights and wage-hour laws, and oversees apprenticeship programs.

Fred Emerich is an American politician and a Republican member of the Wyoming Senate representing District 5 since January 11, 2011.

Ed Murray is the former Secretary of State of Wyoming. He is a member of the Republican Party.

The 2018 Wyoming gubernatorial election took place on November 6, 2018, to elect the Governor of Wyoming. Incumbent Republican Governor Matt Mead was term-limited and could not seek re-election to a third consecutive term. Republican nominee Mark Gordon defeated Democratic nominee Mary Throne by nearly 40 percentage points. This was the first time since 1978 that a candidate from the President's party was elected governor in Wyoming. 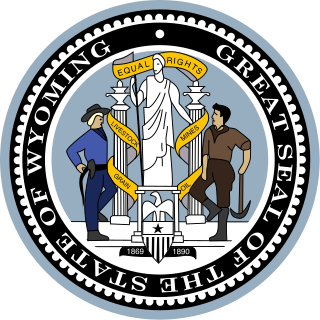 A general election was held in the U.S. state of Wyoming on November 6, 2018. All of Wyoming's executive offices were up for election, as well as a United States Senate seat and Wyoming's at-large seat in the United States House of Representatives. Primary elections were held on August 21, 2018.

Kate M. Fox is an American lawyer and judge, who is an associate justice of the Wyoming Supreme Court.

The Wyoming secretary of state election of 1962 took place on November 6, 1962. The incumbent Secretary of State, Jack R. Gage, chose not to run for reelection and instead won a term of his own as governor of Wyoming in 1962. Thyra Thomson, the widow of Representative Edwin Keith Thomson, defeated Frank L. Bowron with 59.93% of the vote. Thomson became the first woman to hold the position of Secretary of State in Wyoming. 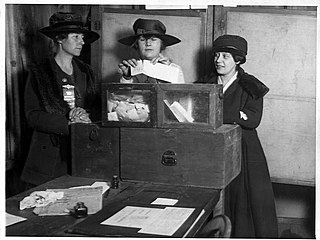