Thyreocoris scarabaeoides is a species of shield bug found in Europe. It is small (3–4 mm.), nearly round and dark bronzy coloured. The surface is shining, glabrous and strongly punctured. The antennae are piceous, the scutellum not quite covering the corium and membrane. The legs are black with spinose tibiae and piceous tarsi. [1]

The nymphs and adults feed primarily on violets ( Viola ), but they are found on the ground under different plant species. Initially, the nymphs live in aggregations. Overwintering is under dry leaf and needle litter, under stones or in moss. Mating takes place from April, the egg laying mainly in May and June. The adult animals of the new generation can be found from late July or August. There is a single generation per year.

The Plecoptera are an order of insects, commonly known as stoneflies. Some 3,500 species are described worldwide, with new species still being discovered. Stoneflies are found worldwide, except Antarctica. Stoneflies are believed to be one of the most primitive groups of Neoptera, with close relatives identified from the Carboniferous and Lower Permian geological periods, while true stoneflies are known from fossils only a bit younger. Their modern diversity, however, apparently is of Mesozoic origin.

Blissus leucopterus also known as the true chinch bug is a small North American insect in the order Hemiptera and family Blissidae. It is the most commonly encountered member of the genus Blissus, which are all known as chinch bugs. A closely related species is Blissus insularis, the southern chinch bug. 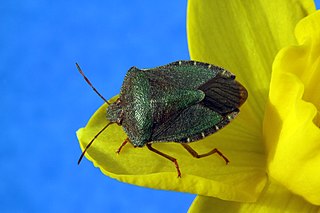 The green shield bug – Palomena prasina – is a European shield bug species in the family Pentatomidae. The name might equally apply to several other species in the tribe Nezarini, or if referred-to as a "green stink bug", it might more appropriately belong to the larger North American bug, Acrosternum hilare. The adult green shield bug ranges in the colour of their backs from bright green to bronze, without any substantial markings. Green shield bugs are a very common shield bug throughout Europe, including the British Isles, and are found in a large variety of habitats, including gardens. They have been found as far north as 63° N latitude.

Dolycoris baccarum, the sloe bug, is a species of shield bug in the family Pentatomidae.

The Tingidae are a family of very small insects in the order Hemiptera that are commonly referred to as lace bugs. This group is distributed worldwide with about 2,000 described species. 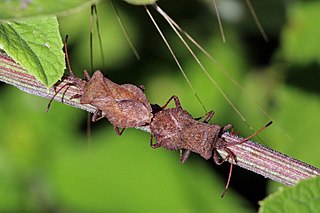 Coreus marginatus is a herbivorous species of true bug in the family Coreidae. It is commonly known as the dock bug as it feeds on the leaves and seeds of docks and sorrels. It is a medium-sized speckled brown insect, between 13 and 15 mm long as an adult, with a broad abdomen. It occurs throughout Europe, Asia and northern Africa. It is often found in dense vegetation, such as hedgerows and wasteland. 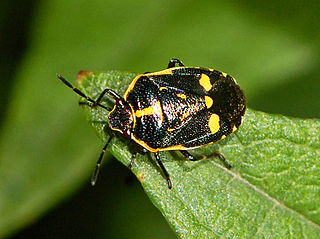 Eurydema oleracea is a species of shield bug in the family Pentatomidae and is commonly known as the rape bug, the crucifer shield bug, the cabbage bug or the brassica bug. 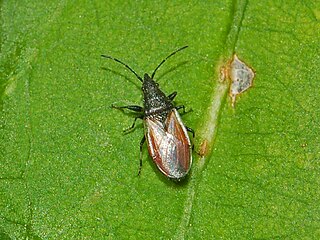 Lygus pratensis is a species of plant bugs belonging to the family Miridae. 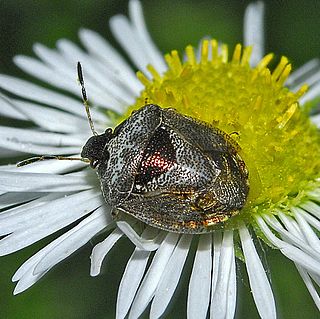 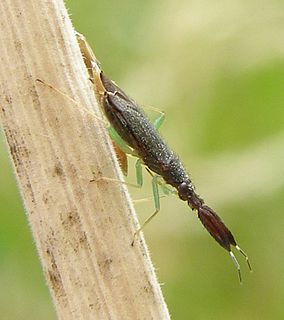 Heterotoma planicornis is a species of bug from Miridae family.

Eurygaster maura, also known as tortoise bug, is a species of true bugs or shield-backed bugs belonging to the family Scutelleridae.

Piezodorus lituratus, the gorse shield bug, is a species of Pentatomidae, a family of shield bugs.

Sehirus luctuosus, the Forget-me-not Bug, is a burrowing shieldbug belonging to the family Cydnidae. It is found from Europe to Central Asia.In Central Europe it is widespread and not uncommon. They are found in the Alps on sunny slopes up to almost 2000 meters above sea level.

Anthocoris nemoralis is a true bug in the family Anthocoridae. The species is native to Europe and is introduced in North America. It is a predator of aphids, spider mites and jumping plant lice, and is therefore used as a biological pest control agent.

Dysdercus koenigii is a species of true bug in the family Pyrrhocoridae, commonly known as the red cotton stainer. It is a serious pest of cotton crops, the adults and older nymphs feeding on the emerging bolls and the cotton seeds as they mature, transmitting cotton staining fungi as they do so.

Leptoypha minor also known as the Arizona ash lace bug is a species of lace bugs in the family Tingidae. It is found in North America and is also very common in California. It is considered a pest that causes twig and foliage damage to Oregon ash trees in addition to other types of ashes. Adult lace bugs can be found hibernating on ash trees during the winter, and during the spring, nymphs begin to emerge. Breeding continues throughout spring until October. L. minor differs from other common lace bugs in that they are generally a light-reddish brown and can grow up to 2 mm. They are compact in body form but lack the lacy lateral lobes of other lace bug species.

The giant mesquite bug is an insect of the order Hemiptera, or the "true bugs". As a member of the family Coreidae, it is a leaf-footed bug. As the common name implies, it is a large bug that feeds on mesquite trees of the American Southwest and Northwestern Mexico.