Thyridia is a monotypic [1] genus of clearwing (ithomiine) butterflies, named by Jacob Hübner in 1816. Its only species is Thyridia psidii, the Melantho tigerwing or clapping ticlear. [2] It is in the brush-footed butterfly family, Nymphalidae and is found in the Neotropical zone. 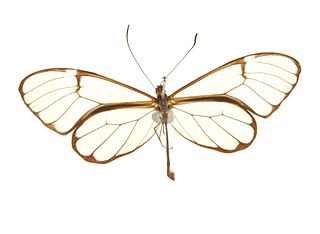 Ithomiini is a butterfly tribe in the nymphalid subfamily Danainae. Some authors consider the group to be a subfamily (Ithomiinae). These butterflies are exclusively Neotropical, found in humid forests from sea level to 3000 m, from Mexico to Argentina. There are around 370 species in some 40–45 genera.

Jacob Hübner was a German entomologist. He was the author of Sammlung Europäischer Schmetterlinge (1796–1805), a founding work of entomology. 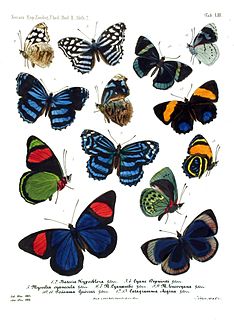 Dismorphiinae, the mimic sulphurs, is a subfamily of butterflies from the family Pieridae. It consists of about 100 species in seven genera, distributed mainly in the Neotropical region, of which only one species occurs in North America and one genus, Leptidea, is in the Palaeartic region.

Danaus, commonly called tigers, milkweeds, monarchs, wanderers, and queens, is a genus of butterflies in the tiger butterfly tribe. They are found worldwide, including North America, South America, Africa, Asia, Indonesia and Australia. For other tigers see the genus, Parantica.

Asterope is a genus of brush-footed butterflies found in the Neotropical realm.

Mechanitis polymnia, the orange-spotted tiger clearwing or disturbed tigerwing, is a butterfly of the family Nymphalidae. It is found from Mexico to the Amazon rainforest. The wingspan is 65–75 mm (2.6–3.0 in). The larvae feed on Solanum species.

Eueides is a genus of butterflies of the subfamily Heliconiinae in the family Nymphalidae.

Mechanitis is a genus of tigerwing (Ithomiini) butterflies, named by Johan Christian Fabricius in 1807. They are in the brush-footed butterfly family, Nymphalidae. It has gained fame due to the metallic appearance of the chrysalis in certain phenotypes.

Ithomia is a genus of clearwing (ithomiine) butterflies, named by Jacob Hübner in 1816. They are in the brush-footed butterfly family, Nymphalidae.

Patia orise is a butterfly in the family Pieridae. It is found from Costa Rica to Brazil and the Guyanas.

Dione juno, the Juno silverspot, juno longwing, or Juno heliconian, is a species of butterfly of the subfamily Heliconiinae in the family Nymphalidae found from southern United States to South America.

Eueides isabella, the Isabella's longwing or Isabella's heliconian, is a species of nymphalid butterfly, belonging to the Heliconiinae subfamily.

Melinaea ludovica is a species of butterfly of the family Nymphalidae found in South America.

Taygetis is a genus of satyrid butterflies found in the Neotropical realm.

Mechanitis lysimnia, the confused tigerwing, sweet-oil tiger or lysimnia tigerwing, is a species of butterfly of the family Nymphalidae. It was described by Johan Christian Fabricius in 1793. It is found in Central and South America, from southern Mexico to Uruguay. The habitat consists of disturbed forests at altitudes up to 1,500 metres (4,900 ft).

Mechanitis menapis, the Menapis tigerwing or variable tigerwing, is a species of butterfly of the family Nymphalidae. It was described by William Chapman Hewitson in 1856. It is found in South America.

Noctuini is a tribe of owlet moths in the family Noctuidae. There are at least 520 described species in Noctuini.