Thyrinteina is a genus of moths in the family Geometridae first described by Heinrich Benno Möschler in 1890. [1] Thyrinteina leucocerae caterpillars are parasitized by Glyptapanteles parasitic wasps which inject their eggs into the caterpillar. When wasp larvae are fully grown they exit the caterpillar and pupate nearby. The caterpillar then covers them in silk and will defend the pupating wasps with violent head swings. [2] 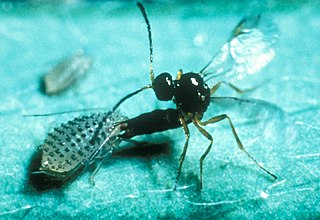 In evolutionary ecology, a parasitoid is an organism that lives in close association with its host at the host's expense, eventually resulting in the death of the host. Parasitoidism is one of six major evolutionary strategies within parasitism, distinguished by the fatal prognosis for the host, which makes the strategy close to predation.

The Ichneumonidae, also known as the ichneumon wasps or ichneumonids, is a parasitoid wasp family within the insect order Hymenoptera. This insect family is among the most species-rich branches of the tree of life. At the same time, it is one of the groups for which our knowledge most severely lags behind their actual diversity. The roughly 25,000 species described today probably represent less than a quarter of their true richness, but reliable estimates are lacking, as is much of the most basic knowledge about their ecology, distribution and evolution. Ichneumonid wasps, with very few exceptions, attack the immature stages of holometabolous insects and spiders, eventually killing their hosts. They thus fulfill an important role as regulators of insect populations, both in natural and semi-natural systems, making them promising agents for biological control.

Manduca sexta is a moth of the family Sphingidae present through much of the American continent. The species was first described by Carl Linnaeus in his 1763 Centuria Insectorum. 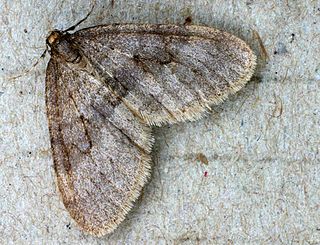 The winter moth is a moth of the family Geometridae. It is an abundant species of Europe and the Near East and a famous study organism for evaluating insect population dynamics. It is one of very few lepidopterans of temperate regions in which adults are active in late fall and early winter. The adults use endothermy for movement in these cold temperatures. The female of this species is virtually wingless and cannot fly, but the male is fully winged and flies strongly. After the initial frosts of late fall, the females emerge from their pupa, walk to and up trees, there emitting pheromones in the evening to attract males. Fertilized, she ascends to lay, on average, around 100 eggs. Typically, the larger the female moth is the more eggs she lays.

The brown-tail moth is a moth of the family Erebidae. It is native to Europe, neighboring countries in Asia, and the north coast of Africa. Descriptions of outbreaks, i.e., large population increases of several years duration, have been reported as far back as the 1500s. The life cycle of the moth is atypical, in that it spends approximately nine months as larvae (caterpillars), leaving about one month each for pupae, imagos and eggs. Larvae (caterpillars) are covered in hairs. Two red spots on the back, toward the tail, distinguish these species from other similarly hairy moth larvae. The winged adults have white wings and a hairy white body with a tuft of brown hair at the tip of the abdomen. Females lay one egg cluster, usually on the underside of a leaf of a host plant. The species is polyphagous, meaning that it feeds on many different species of trees, including pear, apple, maple and oak. 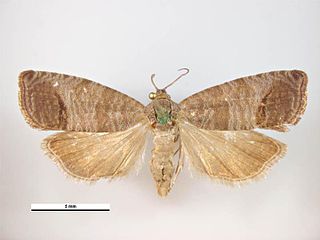 Manduca quinquemaculata, the five-spotted hawkmoth, is a brown and gray hawk moth of the family Sphingidae. The caterpillar, often referred to as the tomato hornworm, can be a major pest in gardens; they get their name from a dark projection on their posterior end and their use of tomatoes as host plants. Tomato hornworms are closely related to the tobacco hornworm Manduca sexta. This confusion arises because caterpillars of both species have similar morphologies and feed on the foliage of various plants from the family Solanaceae, so either species can be found on tobacco or tomato leaves. Because of this, the plant on which the caterpillar is found does not indicate its species.

Antheraea polyphemus, the Polyphemus moth, is a North American member of the family Saturniidae, the giant silk moths. It is a tan-colored moth, with an average wingspan of 15 cm (6 in). The most notable feature of the moth is its large, purplish eyespots on its two hindwings. The eyespots give it its name – from the Greek myth of the cyclops Polyphemus. The species was first described by Pieter Cramer in 1776. The species is widespread in continental North America, with local populations found throughout subarctic Canada and the United States. The caterpillar can eat 86,000 times its weight at emergence in a little less than two months.

Hyalophora cecropia, the cecropia moth, is North America's largest native moth. It is a member of the family Saturniidae, or giant silk moths. Females have been documented with a wingspan of five to seven inches (160 mm) or more. These moths can be found all across North America as far west as Washington and north into the majority of Canadian provinces. Cecropia moth larvae are most commonly found on maple trees, but they have also been found on cherry and birch trees among many others. The species was first described by Carl Linnaeus in his 1758 10th edition of Systema Naturae. 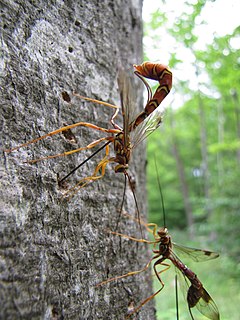 Tineola bisselliella, known as the common clothes moth, webbing clothes moth, or simply clothing moth, is a species of fungus moth. It is the type species of its genus Tineola and was first described by Arvid David Hummel in 1823. The specific name is commonly misspelled biselliella – for example by G. A. W. Herrich-Schäffer, when he established Tineola in 1853.

The saddleback caterpillar is the larva of a species of moth native to eastern North America. It is also found in Mexico. The species belongs to the family of slug caterpillars, Limacodidae.

The bird-cherry ermine is a species of moth in the family Yponomeutidae, the ermine moths. The wingspan of the moth ranges from 16 to 25 mm. The insect was first described in 1758 by the Swedish naturalist Carl Linnaeus who gave it the name Phalaena evonymella; it was later transferred to the genus Yponomeuta, becoming Yponomeuta evonymella. The moth can be found in the whole of Europe and the northern and eastern part of Asia. 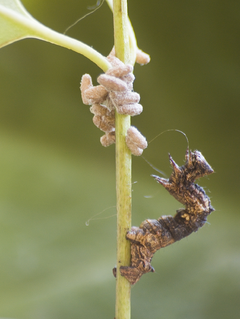 Glyptapanteles is a genus of endoparasitoid wasps found in Central and North America and New Zealand. The larvae of the members of Glyptapanteles sp. are distinguished by their ability to manipulate their hosts into serving as bodyguards.

The Chrysauginae are a subfamily of snout moths. They are primarily Neotropical and include about 400 described species.

Lymantria dispar multicapsid nuclear polyhedrosis virus or LdMNPV is a viral infection in gypsy moths that causes infected larvae to die and disintegrate. Infected larvae climb to the top of a tree and die. The larvae then melt or disintegrate, falling onto the foliage below, where they infect more larvae.

Copidosoma is a genus of chalcid wasps, which are parasitoids of Lepidoptera. The wasps are polyembryonic, depositing one or two eggs into their host which then develop into multiple offspring and have a soldier caste and a reproductive caste.

Liothula omnivora, the common bag moth, is a psychid moth endemic to New Zealand. Māori names for bagworms include pū a Raukatauri meaning 'flute of Raukatauri', the goddess of music; whare atua meaning 'house of the spirit'; or kopi meaning 'shut'.